One of the five door prizes at the biennial Cairns “X-Kiaps, Families and Friends Reunion” event was a penultimate-draft set of the six-volume history of The Sepik which has been a labour of love of Laurie Bragge since fully retiring seven years ago.

The reunion was held on 13 July, 2018 at the Cairns Colonial Club and attracted over eighty attendees (more details in the December issue). 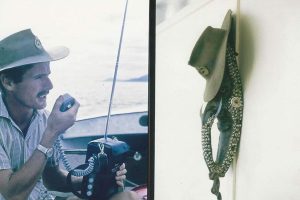 Laurie went to PNG as a Cadet Patrol Officer in February, 1961. By early 1970 he was a District Officer and was posted to Ambunti in the East Sepik as the Assistant District Commissioner.

He was informed, by his predecessor during the ‘Handover/Takeover’, that an urgent priority was the registration of a number of land disputes for hearings by the Lands Titles Commissioner (LTC) before they erupted into serious violence.

Checking the office files for the history of these disputes Laurie could only find details dating back a mere four years despite at least one (“The Brugnowi Dispute”) having an oral history dating well back into the 19th Century. There was nothing in the files touching on earlier history of the disputes, which included a 1923 raid during which 68 heads were taken resulting in the Ambunti government station being established.

Between all his other duties of administering a sub-district, Laurie set about winning the confidence of elders from nearby villages involved in the 1923 massacre. Using a tape recorder he recorded answers to his questions. However, Laurie noticed that the elders continued discussing issues amongst themselves, often for hours, after the formal interviews had ceased. He therefore left his recorder running after formal questioning had been completed. Then he spent hours, with interpreters, typing up what were the elders’ perceptions of their village history, customs, myths and legends.

During his four years at Ambunti Laurie conducted 20 patrols and used his recorder to interview over 200 Sepik elders. He also discovered many old files nailed up in plywood tea chests consigned to the government store shed to make space available in the office filing cabinets for more recent records.

Laurie learned about three migrations from Japandai village, and of a second 1920’s massacre. With this wealth of information he wrote a paper “The Japandai Migrations” – the third of which was into lands known as Brugnowi, the subject of registration, in 1970, for the LTC hearing.

In 1984 Laurie was invited to attend a Wenner Gren symposium in Basil, Switzerland where he presented his paper. The presentation was very well received by the 60 academics in attendance. The paper is included in a large volume (663 pages) published in 1990 1.

Laurie’s analysis of the material supplied by the elders “… showed seven consecutive topics and an eighth that was timeless, but spiritual based”:

“1 Myths and Legends. 2 Pre-history (known and remembered pre-contact events). 3 The German Colonial Era. 4 The Australian Colonial Era. 5 The Japanese Colonial Era. 6 The Post War Australian Colonial Era. 7 Self-Government and Independence. 8 Cargo Cult.”
Thus it was, with these records and volumes of other information such as Patrol Reports, he set about his epic work. Even in its early draft forms the History of the Sepik was applauded by Sir David Attenborough. This well-known documentary maker/broadcaster has contributed to the volumes by way of an Introduction. Sir David and his BBC film crew accompanied an April River patrol led by Laurie in 1971. According to Sir David, the resulting documentary “A Blank on the Map” … “captured the essential elements of that adventure”.

Sir David ends his Introduction with:

… “I commend Laurie Bragge’s history of the Sepik which is engaging and immensely informative, with detailed referencing throughout. I am delighted to support Laurie’s contribution to cultural preservation, a legacy from the now long-dead Sepik elders who entrusted him with their oral traditions …”

1 Nancy Lutkehaus (ed), Sepik Heritage – Tradition and Change in Papua New Guinea, ISBN 9781863330145 Crawford House Press, Bathurst, NSW.
—————————————–
(Laurie is donating a set of volumes, once finalised, to the PNGAA Collection and will welcome any comments and contributions. C. W.) 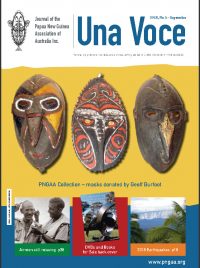