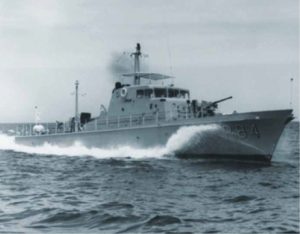 BACK IN 2015 I sent a letter to Una Voce lamenting the fact that the otherwise excellent two-volume set of Papua New Guinea’s Pictorial History, compiled by Dianne McInnes (Pictorial Press Australia, 2015) had one notable omission. This was the lack of any mention or photo of naval activities in Papua New Guinea other than what happened in German New Guinea in 1914. The Defence Force section in Volume 1–Pre-1975 is mostly Army with some Air Force, and the Defence section in Volume 2–Post-1975 is mostly Air Force with some Army. The Royal Australia Navy was indeed the ‘silent service’ in these two volumes.

There are many naval-related activities that might have qualified for inclusion in these two volumes, for example, the Manus war crimes trials and other developments on Manus Island towards the end of and post- World War II. Although most media reports and other commentaries (including myself in this article) invariably talk about naval activities occurring on Manus Island, this is not strictly correct. Most naval activities are located at Lombrum on Los Negros Island separated from the larger Manus Island by the narrow, and barely navigable even by canoes, Loniu Passage. The main airfield of Momote is also on Los Negros. Lorengau, the capital of the Manus Province, is situated on Manus Island.

A photo of the huge US naval base at Lombrum and the shipping in Seeadler Harbour might have been included in the pictorial history—there’s plenty available on the web and elsewhere. I was also surprised that the coverage of World War II in Volume 1 has no mention of the coastwatchers.

Eric Feldt’s book, The Coastwatchers, is not included among the sources for this volume.

It was not the same case, however, in James Sinclair’s comprehensive two-volume history of the military in PNG, To Find a Path (Boolarong Publications, 1991). Volume I of this publication, subtitled ‘The Life and Times of the Royal Pacific Islands Regiment’, is as the sub-title suggests, wholly focused on land operations, the PIR and the Army in PNG except for some references to the coastwatchers. 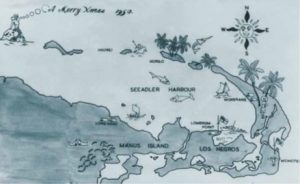 An overview of Manus and Los Negros Islands captured on a 1950’s Christmas card; (https://www.navy.gov.au/history/base-histories/ hmas-tarangau)

Chapter 7 of Volume II of To Find a Path does, however, have an excellent chapter on the RAN in PNG and the establishment of the Maritime Element of the PNG Defence Force (‘the PNG Navy’). It accurately traces the history of the navy in PNG from the RAN’s takeover of the American naval base on Lombrum, one of the most powerful naval bases in the world at the end of World War II, through to the establishment of HMAS Tarangau as the Australian naval base at Lombrum; its utility as an oil fuel installation supporting Australian naval deployments to East Asia in the 1950s and 1960s; the formation of the PNG Division of the RAN in 1951; to the deployment of five Attack-class patrol boats to the RAN in PNG in the late 1960s as the nucleus of what became the Maritime Element of the PNG Defence Force when it was established in 1971. Initially mainly crewed by Australian officers and men, the process of localisation of the patrol boat crews proceeded apace. In 1974 Lieutenant Karrie Frank of the PNGDF took command of HMAS Ladava, the first fully PNGcrewed patrol boat.

The patrol boats of the PNG Patrol Boat Squadron had a busy existence. They patrolled extensively through PNG’s waters occasionally arresting foreign fishing boats, mainly Taiwanese, fishing illegally in PNG’s declared fishing zone, as well as making occasional goodwill visits to the Solomon Islands and Federated States of Micronesia. In 1969, HMA Ships Aitape and Ladava made a voyage of 231 miles up the Sepik River to Ambunti and, in 1970, these same two patrol boats ascended the Fly River to Kiunga. An account of their passage up the Sepik is available in the film, Navigating the Sepik, at:       http://navy.gov.au/ history/videos/navigating-sepic 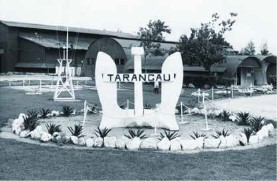 In addition to the patrol boats, the RAN transferred two landing craft heavy (LCH) of the Balikpapan-class to the PNGDF Maritime Element. These were HMA Ships Buna and Salamaua. These two ships, along with sister ships from the RAN, have made a significant contribution to nation-building in PNG, regularly moving equipment and stores around the country, including PNGDF engineering plant up and down the Fly River. Their several voyages up the Fly in the early 1970s played a part in opening up the Fly to river transport associated with the Ok Tedi copper mine. Their work was acknowledged in a seminal article ‘The Fly River: A Continuing Hydrographic Challenge’, by P Done in the International Hydrographic Review, Monaco, Vol. LXII (2), July 1985.

On 14 November 1974, the RAN’s direct involvement in PNG came to an end with the decommissioning of HMAS Tarangau and the five patrol boats of the PNGDF Patrol Boat Squadron and the two LCHs of the PNGDF Landing Craft Squadron. The ships were then recommissioned as HMPNG Ships. The Maritime Element’s bases at Lombrum and Port Moresby became known simply as ‘PNGDF bases’ in line with general PNGDF practice. A few years ago, they were recommissioned as HMPNG Ships Tarangau and Basilisk respectively (the RAN’s previous facility in Port Moresby had been HMAS Basilisk). Giving a ship’s name to a shore base follows the practice of other Commonwealth navies that trace their origins back to the British Royal Navy.

As James Sinclair describes in To Find a Path, the RAN continued to operate in PNG waters after the formation of the Maritime Element but only by agreement between the PNG and Australian Governments. These operations included work by RAN minesweepers to clear minefields laid during World War II and extensive hydrographic surveys of PNG waters by RAN survey ships. 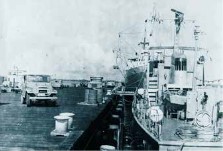 Any lack of attention to naval activities in PNG is somewhat surprising. PNG is clearly a major maritime state with a very large maritime domain under its jurisdiction. Over time, activities at sea have played an important role in the history of the country both in peace and war. During World War II, major amphibious landings took place in PNG, including at Aitape, near Lae, at Momote on Los Negros, at Jacquinot Bay on New Britain and at Cape Torokina on Bougainville. Significant battles took place at sea in or near PNG waters, including the Battle of the Bismarck Sea, the Battle of Empress Augusta Bay and of course, the battle of the Coral Sea.

For those interested, the Naval Studies Group at the University of NSW in Canberra has produced a series of podcasts discussing notable events in the history of the RAN. The third series of these podcasts include three discussing the RAN’s involvement in PNG through to and after PNG’s Independence. They are available at:

I have a personal stake in correcting the record with regard to the RAN in PNG. I had two long postings with the Navy in Papua New Guinea—at HMAS Tarangau from mid-1967 to early 1970, including being in command of HMAS Aitape, the first PNG patrol boat (later HMPGS Aitape), followed by three years at Murray Barracks in Port Moresby late 1971 until late 1974—so the absence of any coverage of naval activities in works on Papua New Guinea’s history is very disappointing. During these postings I traveled extensively in the country, including the voyage up the Sepik mentioned above. Over my two years in Aitape, we visited most coastal missions, most coastal government stations and many plantations both around the coast and in the islands.

This is the first part of what I plan to be a two-part article. The second part will trace the more recent history of the ‘PNG Navy’.