This narrative follows on from the first part published in the previous issue of PNG Kundu and describes the culmination of our venture to the PNG Star Mountains summits after parting with our local helpers at Dokfuma Plateau.

Previous Star Mountains ascents we knew of used a long route cleared by local cutters from the north end of Dokfuma curving north of Mt Capella. It looked very long and arduous through difficult limestone pinnacle country. We opted for a more direct route up the south-east side of Mt Capella, through patchy scrub and long grass, a short patch of intricate limestone pinnacles, and then relatively easy cloud forest, climbing above the marshy ‘Lake’ Sirius. After three days of light track-cutting and shuttling food and gear upwards, we reached a grassy glacial cirque basin just below the mountain’s central ridgeline. At 4,000 m altitude we could feel the effects of thinning air, and with the daily heavy afternoon rain meant slow but steady progress, early morning starts and mid-afternoon camps becoming our daily routine.

The next day we left our tents before sunrise hoping to reach the summit before the regular morning fog covered it. Reaching the skyline ridge crest, we were greeted by a spectacular clear dawn light on Mt Scorpio to our west. Other large, distant peaks soared across the border in West Papua. In cool, bright conditions, we threaded our way along the grassy alpine limestone crest of intricately sculpted ‘lapies karst’ rock forms, taking our time to avoid holes and other ankle breakers.

We reached the southern and highest summit of the mountain around 8.00 am, still in bright sunlight with a glorious view of mountains along the high central spine of New Guinea both east and west. However, the regular daily clouds were already rising up the southern slopes below, and less than an hour after starting back to camp, we were shrouded in mist with an icy hailstorm on the ridgetop. After perfect conditions on the summit, we returned to our tents in wet misty conditions and spent much of the dismal day in our sleeping bags! 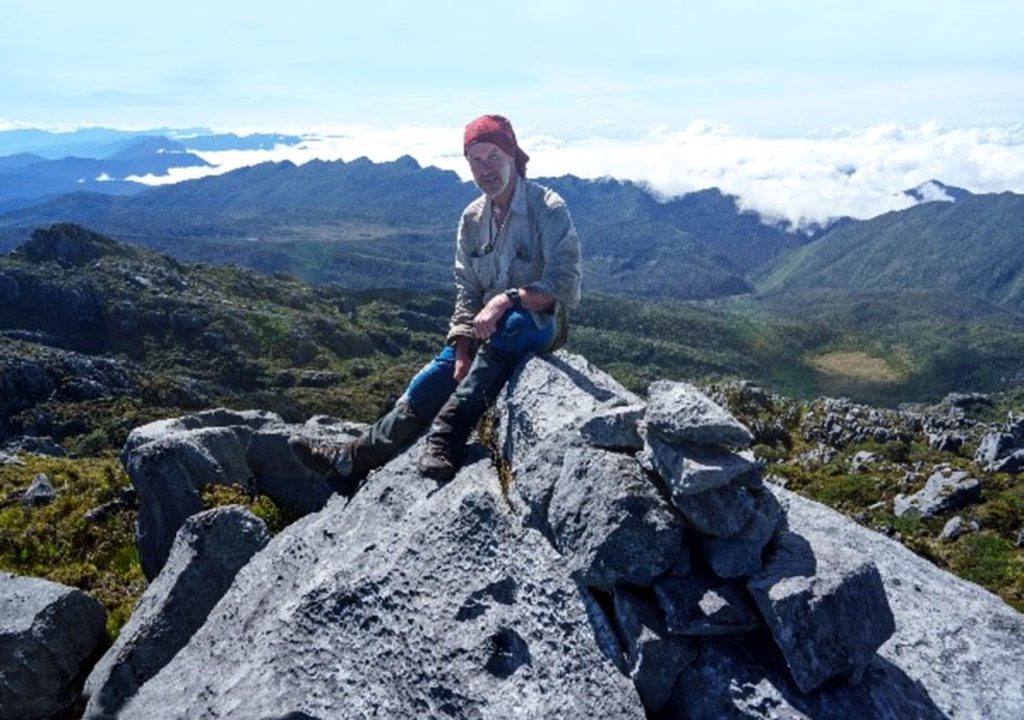 The author on Mt Capella summit, with the central divide of PNG stretching away to the east beyond the back of Benstead Bluff, and the cloud-wreathed lowlands of the Ok Tedi basin beyond to the right (Image by Grant Dixon) 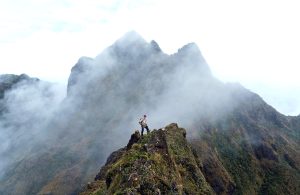 We spent the next three days traversing west along the narrow ridge linking Mt Capella to our furthest objective, Mt Scorpio (local name Milaywoong). Having had a clear view of the route ahead during our ascent of Mt Capella, we crossed the Capella ridge at its lowest point and made our way down the other side across fairly open slopes. We had only one annoying stretch of scratchy alpine scrub to cross on the way—and easily avoided it coming back. One night was in a perfect campsite beside a delightful alpine tarn in a grassy saddle. 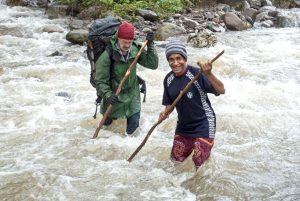 The author and Kavorabip villager, Jennifer, crossing the Harom River on the way back to the mine (Image by Grant Dixon)

We spent the next two days walking the narrow and in places almost knife-edged ridge crest that is the central drainage divide of New Guinea here. This alpine grass ridgeline is mostly a delight to traverse and camp on—numerous alpine tarns above forested slopes dropping thousands of metres into the valleys north and south. We could see at least one village far below to the north.

Our biggest obstacle was a daunting alpine scrub in the lowest saddle on the ridge, but astonishingly after struggling through a few hundred metres of it we stumbled on to a rough but recently–cleared track. We easily followed it almost to the western end of the scrubby saddle before we lost it again. Perhaps it was a local route between villages north and south across the central divide at its lowest and narrowest point, but we could not know.

We camped at a pleasant spot on the grassy slopes of Mt Scorpio on a typically wet misty afternoon. Below was a sizeable lake halfway up the easternmost of several glacially eroded valleys, studded with tarns radiating from the central cluster of steep peaks making up the Mt Scorpio massif. The rain and mist eased later in the day, so we spent a few hours looking around and scouting the route ahead to Mt Scorpio’s summit.

Next day, 14 November 2016, was significant for me: the day before my sixtieth birthday. Here I was, in probably the most remote and wild location I have ever been—one that I had been wanting to reach for almost exactly half my life. Grant left camp before sunrise to get some dawn photos high up.

I slept in a few minutes longer before following in the clear dawn light. I caught up with him near the foot of a steep and somewhat sketchy climb up the eastern side of what we assumed was the main summit. When we topped the ridgeline we could see that it was but the lower south summit of Mt Scorpio, with the higher northern peak still a kilometre or so to our north.

An hour or so of straightforward scrambling along another partly knife-edge section of the central divide, then up some grassy and rocky slopes, finally brought us to the true (northern) summit of Mt Scorpio. It was marked by a small rock cairn, probably erected by the 1965 Star Mountains Expedition. It was not yet 9.00 am; despite the inevitable daily mists already starting to swirl around the peaks, we had spectacular views into West Papua. We discerned a line of rugged and no doubt formerly glaciated peaks far to the west across the international border. Elated to finally be here, I could not resist leaving a smug note in a small plastic bag in the summit cairn!

Returning to camp in the patchy mist was not difficult; it was hard to miss the ridge-crest. However—almost as if to take the shine off our elated mood—about a kilometre south of the summit we noticed several rock outcrops marked by pink tapes and hammer blows. Being geologists we realised these were signs of recent mineral exploration. Further on, we noticed tapes apparently marking out a helicopter landing site. Despite this little reminder that few places are beyond aerial access, our satisfaction at having walked every step of the way from the Ok Tedi Mine to the summit of Mt Scorpio was undiminished. 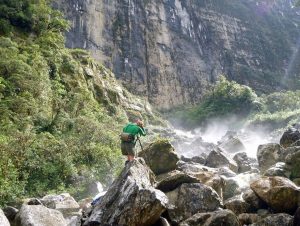 With lighter packs and a known and mostly downhill route, we returned from Mt Scorpio to Kavorabip village in only five days of mostly drama-free walking. None of the villagers seemed too surprised to see us back, so hopefully our bush skills had gained some degree of local credibility. Two Kavorabip people, Hans and Jennifer, offered to help us carry our gear back to the mine, which suited us well. Back in Tabubil a few days later we had a visit at the hotel from the Kavorabip headman, Abson, in town for meetings. He was clearly pleased to see us back alive and undamaged, vindicating his decision to let us continue into the alpine regions on our own terms.

With a week left before our flight back to Port Moresby, we wanted to take a trip up the nearby Ok Kam valley to the legendary Hindenburg Wall. This is a spectacular vertical wall of limestone reaching up 600 metres, a couple of days walk east of Tabubil. The valley has a number of inhabited villages, so as a courtesy we should use local guides to introduce us along the way. Abson was happy to help and we soon had four guides with close relatives living in or regularly visiting the Kam valley. 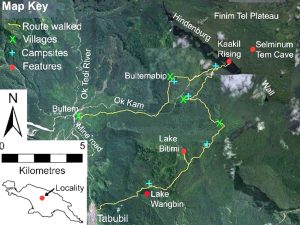 Route and selected features between Tabubil township and the Hindenburg Wall (Google Earth imagery). The route is based on GPS tracks captured by the author using a Garmin GPS64 handheld GPS unit. The route was mainly existing walking tracks except between Bultemabip and Kaakil Rising where streams were followed.

We spent six days walking between villages, including a nostalgic return to the pretty, peat-filled Lake Bitimi I had visited in 1996. The undoubted highlight was an afternoon we battled our way in warm torrential rain clad in shorts and T-shirts up the bouldered banks of the dramatically flooding Ok Kaakil towards the Hindenburg Wall. In fine sunny weather next morning we followed the by-then less dramatic river to the very foot of the Wall, where it cascades out of a hole in the cliff itself at a spring known as the Kaakil Rising. A British Speleological Expedition to the Wall in 1975 proved that this spring is an outflow from the enormous Selminum Tem cave which descends within the wall itself from the Finim Tel plateau above.

Back in Tasmania, a friend who had made a series of caving trips while in PNG expressed surprise at how trouble-free our expedition was. I believe our success came by contacting local people well before our trip, logistics made easy by regular commercial flights to Tabubil, and a good supermarket for supplies. I am also sure we simply did not have the logistical nightmare of an old-style expedition: many people involved and many things waiting to go wrong. We were two guys going on a slightly extended bushwalk with a simple ethic of travelling light and being mostly self-sufficient.