In 1963 white people first tried to reach the western Star Mountains peaks (John Groenewald’s ‘Diary of the 1963 Star Mountains Patrol’, Una Voce, December 2016). My account describes a private expedition to that remote and rarely visited corner of PNG. In November 2016 Grant Dixon and I climbed the two main Star Mountain peaks on the PNG side of the border, Mt Capella and Mt Scorpio, only a few kilometres from West Papua. 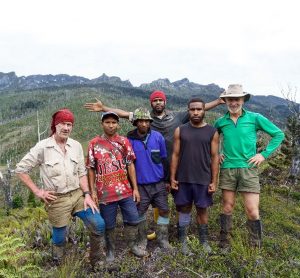 The Star Mountains, once glaciated, reach 4,000 metres above sea level at the geographical centre of New Guinea, straddling the PNG-West Papua border. Between and west of Capella and Scorpio, the broad central New Guinea ranges narrow down to a single ridge providing a spectacular alpine traverse with steep slopes dropping thousands of metres either side to the Sepik River north and the Digul River basin south.

A Dutch expedition first saw from a distance and named the Star Mountains in 1914, but it was not until 1959 that a Dutch scientific expedition first climbed the highest peak on the West Papua side, Mt Antares, and Mt Juliana (now Gunung Mandala) further west. Juliana still had a ‘permanent’ cap of glacial ice, which disappeared around 2000. In PNG, the 1963 Fitzer patrol was forced to turn back near Beroro Pass, but two years later in 1965 the Australian Star Mountains Expedition, over several months, explored westwards from Telefomin. It made the first ascents of Mt Capella and Mt Scorpio before descending south over Beroro Pass to Kavorabip village, a day’s walk north of what is now the Ok Tedi Mine. The definitive story of this expedition, The Star Mountains (Tom Hayllar, Balboa Press, 2016), appeared just prior to our visit. 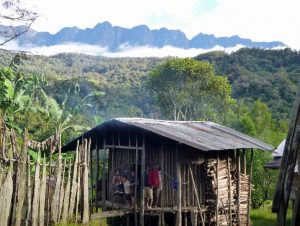 At Kavorabip village, with Benstead Bluff beyond

Surprisingly, our literary research and enquiries to both locals and previous expedition members indicated only two subsequent ascents of Mt Capella and just one of Mt Scorpio, all in 1975. This is despite extensive regional mineral exploration following Ok Tedi mine’s establishment, and local people regularly crossing the high alpine grasslands of Dokfuma Plateau (east of Mt Capella), itself the site of several subsequent scientific expeditions. This apparent dearth of subsequent ascents may be because the original route from the northern end of Dokfuma Plateau to Mt Capella was much longer and harder than the route we explored from the south-eastern side during our 2016 expedition. 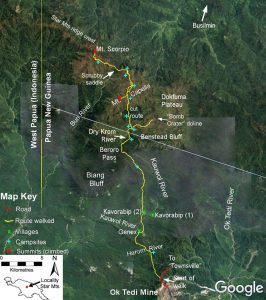 Walking route and selected features between Ok Tedi Mine and the Star Mountains. Satellite photography is Google Earth imagery. Green areas are forest and brownish areas are alpine grass and scrub. The route walked is based on GPS tracks captured by Chris Sharples using a Garmin GPS64 handheld GPS unit. The walking route is an existing walking track from Ok Tedi Mine to Dokfuma plateau, but from there to Mt Capella and Mt Scorpio was an unmarked route chosen (and cut where necessary) by Grant and Chris.

In 1985, after a ten-year bushwalking apprentice-ship in southwest Tasmania, I looked for challenges further afield. I initially focussed on visiting the Carstensz Pyramid tropical glacier region in then Irian Jaya. Faced with the seemingly insurmountable political and bureaucratic difficulties in gaining independent access to that area, I looked at the Star Mountains. While not as high, they were still glaciated tropical alpine peaks and were less-known and less-visited than the Carstensz. Both qualities appealed to me. Given that there seemed to be no political obstacles to visiting the PNG side of these mountains I saw them as an opportunity to explore one of the least-known alpine areas on the planet.

In those pre-internet days, I could not find much about the Star Mountains. In late 1986 I decided to just go to PNG and see what I could find out. I flew to Mt Hagen, but it all got too hard. I made do with a solo ascent of PNG’s highest peak, Mt Wilhelm. Ten years later, in 1996, I made a second attempt with Ian Houshold. This time we not only reached the Ok Tedi mining town of Tabubil, we spent five weeks exploring the area, including an unsupported two-week bushwalk to Dokfuma Plateau. It became obvious that climbing the high summits would need more time than our self-carried food supplies allowed. Our reconnaissance gave me some idea of what would be needed to reach the summits.

Several subsequent attempts to organise a return expedition went nowhere. As the years went by the dream of climbing the Star Mountains faded. Then, in 2015, a friend asked me to join him on the popular (and highly managed) Kokoda Track walk. That trip reminded me I still had unfinished business in PNG. With my sixtieth birthday approaching, I realised it was time to do it or forget it. After all these years of thinking about it I could not forget it. Fortunately, I mentioned the idea to Grant Dixon, a friend with a wealth of experience walking and climbing in mountain areas all over the world. He was interested: New Guinea was one place he still had never visited.

Previous successful expeditions to the PNG Star Mountains were highly organised; our five-week visit during November 2016 was a low-key affair, entirely self-funded, with minimal planning and only a normal bushwalking kit. We could do this because Tabubil, with daily flights from Port Moresby, a supermarket and hotel accommodation, provided a convenient point of entry to the Star Mountains. The real key to our success, however, was finding a local contact prior to our visit. We thus could meet senior members of the local Wopkaimin people soon after our arrival, and negotiate permission to visit their traditional lands. The contact made was a classic ‘four degrees of separation’ job: a local caving friend in Tasmania, Greg Middleton, put us in touch with Mike Bourke, a caver and researcher with many years of experience in PNG, who put us in touch with Peter Graham, the CEO of Ok Tedi Mining Ltd. (OTML), who put us in touch with OTML’s community liaison officer, Yon Buhuyana—who worked with the local community leaders. Without their permission and assistance our trip could not have proceeded 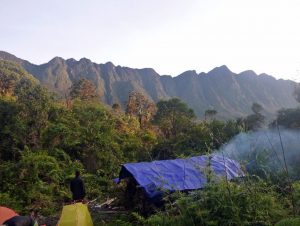 Benstead Bluff from our campsite in the upper Kauwol Valley

Our flight from Port Moresby to Tabubil was diverted to Kiunga on the Fly River due to cloud. We still arrived in Tabubil by bus the same day and contacted Yon who had organised our meeting with Wopkaimin elders and some prospective guides. After lengthy discussion we set off through the mine. A day and a half’s walk got us to Kavorabip with four local guides who carried our gear and enough food for three weeks in the alpine areas.

The whole village welcomed us, and we had another round of talks with the village chief Abson Buretam. Our plan to explore the areas unassisted was a cause of concern, but the fact I had knowledge of the area from my previous visit—remembered by at least one of the villagers—and that we obviously understood what we were getting ourselves into helped our case considerably. We also described our satellite kit that we would use to communicate our progress and position to Yon and others. 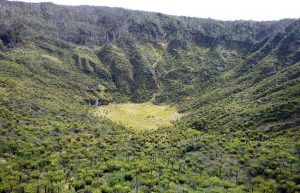 This, and the fact that the locals had no experience of, nor equipment for the high alpine areas we were able to persuade Abson to agree to our proceeding. We later learnt that this was a point of contention in Tabubil. Our subsequent return alive, successful, and unharmed, no doubt left us with a reputation as very unusual white fellas!

We were happy for our local guides to carry some of the three weeks’ worth of food and stove fuel along a rough, but well-used local track, up the Kauwol River valley above Kavorabip. This led us past the imposing cliffs of Benstead Bluff, over Beroro Pass and up the dry (karstic limestone) bed of the Krom River. Its deep gorge provided a relatively straightforward passage between imposing limestone cliffs to the open alpine grassland of Dokfuma Plateau beyond. Here by agreement our guides left us at the foot of the long jagged alpine ridge of Mt Capella, which we were told is known locally as ‘Dain Namalok’ (the “white mountain”) for its notably pale limestone bluffs and precipices. We spent a rest day exploring the south-west end of the grasslands and cached some of the food and fuel for our return.

Part 2 of this narrative, to be published in the next issue of PNG Kundu, describes the culmination of our venture to the PNG Star Mountains summits, after parting with our local helpers at Dokfuma Plateau.