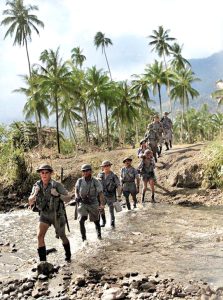 Thomas Fisher’s photograph of an Australian patrol from the 61st AIF Battalion crossing a river while searching for Japanese in the Milne Bay area.

Australian troops had, at Milne Bay, inflicted on the Japanese their first undoubted defeat on land. Some of us may forget that, of all the Allies, it was the Australians who first broke the invincibility of the Japanese army.

The Battle of Milne Bay is one of the Australian Army’s most overshadowed battles. The public’s attention is mostly drawn to the Kokoda Campaign, which was fought at the same time. Kokoda rightly deserves its accolades, but so too does its sister battle at Milne Bay for the bitter fighting over this isolated harbour played an equally important role in contributing to the shifting Allied fortunes in the Pacific War.

Offering a sheltered harbour, Milne Bay cuts into the eastern tip of the island of New Guinea. Its remoteness, swampish landscape and the prevalence of tropical disease deterred any significant development prior to WWII. Despite these disadvantages, Milne Bay is situated between a number of locations that were at the forefront of the war in the South-West Pacific in mid-1942, namely Port Moresby, Rabaul, Guadalcanal and Buna-Gona.

The strategic value offered by Milne Bay’s location prompted General Douglas MacArthur to order the secret construction of an Allied base with airfields to protect the maritime approach to Port Moresby. From this base, Allied aircraft could attack the large Japanese base at Rabaul without flying the dangerous journey over the Owen Stanley mountain range.

The base at Milne Bay was quickly established and expanded. Australian and American troops assisted by Papuan labourers worked tirelessly to construct 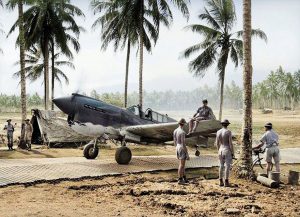 A ground crew member of 76 Squadron RAAF sits on the wing tip to guide the pilot of the P-40 Kittyhawk, who couldn’t see over the nose while taxiing on the Marston planking on the runway at Milne Bay.

facilities to support a garrison of nearly 10,000 men. Crucially, the Allies sought to conceal the base’s development and size for as long as possible.

Their endeavour was successful; for once the Japanese discovered it and despatched a task force to seize the base, they did so based on a faulty estimate that the garrison’s strength was less than one-tenth of its actual size.

The battle began on the night of 25/26 August 1942, when the Imperial Japanese Navy landed approximately 1,200 men at Wahahuba Bay on Milne Bay’s north shore.

From the beginning, the Japanese were at a disadvantage. The marines were landed eleven kilometres east of their intended landing area, and their intelligence had significantly underestimated the Allied garrison. Whereas the Japanese believed there were no more than a few hundred troops defending the airstrip, there were actually almost 9,000 Allied troops including two Australian infantry brigades—the 7th and the 18th. 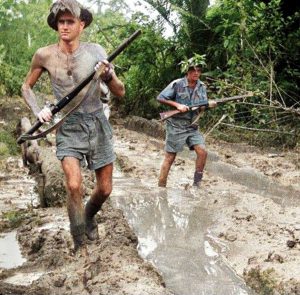 Australian troops plough through the mud at Milne Bay shortly after the unsuccessful Japanese invasion attempt.

The Allies had the additional advantage of having air support close at hand because the 75 and 76 Squadrons from the RAAF, both equipped with P-40 fighter bombers, were also based at Milne Bay.

Initially, however, the Japanese met with their accustomed success. Supported by two light tanks, they advanced steadily westward. The 61st Battalion was first into action and slowed the Japanese, although unable to hold them back.

The 2/10th Battalion was moved up on the night of 27 August, but faulty dispositions and other command failings, meant it was brushed aside by a renewed Japanese thrust, and disintegrated in a confused withdrawal.

Reaching the edge of the easternmost airstrip on 28 August the intensity of Japanese operations fell away as they made preparations for their attack, which included landing 800 reinforcements. In the early hours of 31 August, they charged the defences manned by the 25th and 61st Australian Battalions and the United States 43rd Engineer Regiment and 709th Anti-Aircraft Battery.

The Japanese suffered grievously, largely due to machine gun and artillery fire, and withdrew by dawn. Throughout their operations the Japanese were constantly harassed during daylight hours by the P-40s.

On the night of 30/31 August, buoyed by the arrival of 800 reinforcements, the Japanese launched an all-out 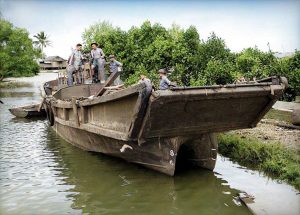 One of the Japanese barges after the battle.

assault on the Allies’ base. The attack was an utter disaster. Scores of Japanese were killed by the lethal array of firepower the Allies had placed along their base perimeter. Not a single Japanese marine breached the Allies’ defensive line.

The following week saw Australian infantry push the Japanese back along the north shore of Milne Bay beyond their original landing point. The remnants of the Japanese task force were evacuated on the nights of 4 and 5 September. The invasion was thwarted and Milne Bay was secure.

Of the 2,800 Japanese landed, only 1,318 re-embarked. It was estimated that up to 750 lay dead around Milne Bay and the majority of the remainder were killed trying to escape overland to the Japanese base at Buna.

Allied deaths included 167 Australians and fourteen Americans. Milne Bay is remembered as the first defeat of the Japanese on land during the Pacific War. Despite an oppressive combination of extreme humidity, voracious insects, and the tropical disease both combined to create, Milne Bay remained an important Allied staging area until victories in New Guinea made other more suitable areas available from September 1943 onwards.

The Allied victory at Milne Bay—one of the first on land in the Pacific War—was a confidence injection to Allied armies across the world. By securing Milne Bay, the Allies kept an important base that serviced the Allied war effort for the duration of the war. In addition, the Allies’ continued occupation of Milne Bay made life more difficult for the Japanese fighting on the Kokoda Trail, because they now knew they could not expect supply from the sea even if they made it all the way to Port Moresby.

Major reasons for the Allied victory included the advantages they enjoyed in troop numbers and weaponry and the close air support provided by the two RAAF fighter Squadrons.

For their part, the Japanese were not used to defeat and struggled to make sense out of the disaster that had befallen them. The Japanese commanders blamed their own troops and denigrated their fighting prowess, willpower and age. 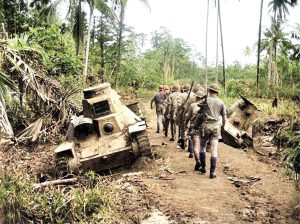 However, the larger failings were of their own making: deficiencies in battle planning, a woeful inadequacy of detailed intelligence and the lack of air support provided to the invasion force.

These failings can be attributed to the underlying problem the Japanese faced in the South Pacific. By committing to simultaneous military operations at Milne Bay, the Kokoda Trail and Guadalcanal, the Japanese grossly overextended themselves, and lacked the manpower and resources to carry any of those three operations to a successful conclusion.

The Milne Bay Memorial at Alotau features an imposing three-metre high granite column, with the centrepiece inscribed with the three service crests, and the words:

In remembrance of those Australians, Papua New Guineans, and their Allies who fought and those who died in the Battle of Milne Bay 1942.

The Turnbull Field Memorial, in the vicinity of the former airstrip known as No. 3 Strip, marks the place where the Japanese advance towards the airfields was ultimately halted. The area was named after Squadron Leader Peter Turnbull, Commanding Officer of the RAAF 76 Squadron who was killed in action in the Battle of Milne Bay.

Milne Bay was bloody awful. Never stopped raining. The mountains came straight up from the strip. The strip was just mud with steel planking on it. It was carved out of a coconut plantation, so if you went off the runway, which you did, you ran into a coconut tree, which didn’t do the aircraft much good.
Flight Lt Arthur ‘Nat’ Gould, 75 Squadron