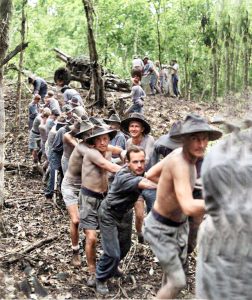 They carried stretchers over seemingly impassable barriers, with the patient reasonably comfortable. The care they give to the patient is magnificent. If night finds the stretcher still on the trail, they will find a level spot and build a shelter over the patient. They will make him as comfortable as possible, fetch him water and feed him if food is available, regardless of their own needs. They sleep four each side of the stretcher and if the patient moves or requires any attention during the night, this is given instantly. These were the deeds of the ‘Fuzzy Wuzzy Angels’!

The Japanese invasion fleet left Rabaul and landed on 8 March 1942 at Lae, without opposition, and Salamaua where a small detachment of the New Guinea Volunteer Rifles (NGVR) and some men from the 2/22nd Infantry Battalion set about the demolition of key infrastructure. After a small skirmish that resulted in one Japanese casualty, they destroyed the bridge over the Francisco River and then withdrew into the hills towards Mubo.

Following the completion of the operation to capture the area, the Japanese began to push inland from Salamaua from 18 March. But when their plans to secure Port Moresby by a seaborne landing in July were disrupted, the Japanese saw the Kokoda Trail as a means by which to advance on it overland. 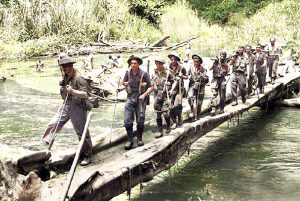 A patrol of Australian Infantry battalions crossing Brown River, during the Kokoda Campaign

The Kokoda Trail was a path that linked Owers Corner, north-east of Port Moresby, and the small village of Wairopi, on the northern side of the Owen Stanley mountain range. It was connected to the settlements of Buna, Gona and Sanananda on the north coast.

Japanese troops of the South Seas Detachment began landing at Gona on 21 July 1942, where a full-scale offensive soon developed. The first fighting occurred with elements of the Papuan Infantry Battalion (PIB) and the 39th Australian Infantry Battalion, commanded by Brigadier Arnold Potts, at Awala on 23 July 1942. Although steadily reinforced by the battalions of 30th and 21st Brigades, the Australian force was unable to hold back the Japanese army. 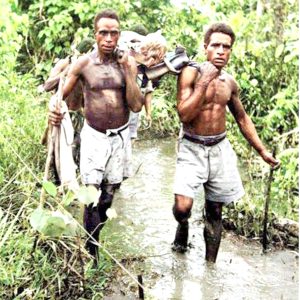 A number of desperate delaying actions were fought as the Australians withdrew along the Trail. They finally stopped on 17 September 1942 at Imita Ridge, the last natural obstacle along the Trail, a mere 8 km from the junction with the road to Port Moresby. The Japanese held the opposite ridge, 6 km distant at Ioribaiwa.

The tactical situation, however, had now swung in favour of the Australians. Their artillery at Owers Corner was now in range and their supplies could be trucked most of the way forward, whereas Japanese supplies had to be carried all the way from the north coast. Australian troops of the 25th Brigade began to edge forward from Imita Ridge on 23 September, and the Japanese withdrew from Ioribaiwa the next day, but fought delaying actions every bit as determined as those of the Australians.

Several difficult and costly battles were fought before the 16th and 25th Brigades crossed the Kumusi at Wairopi in mid-November 1942 heading for even more bitter fighting around the Japanese beachheads at Gona, Buna and Sanananda.

The Kokoda Trail fighting was some of the most desperate and vicious encountered by Australian troops in the Second World War. Approximately 625 Australians were killed along the Kokoda Trail and over 1,600 were wounded. Casualties due to sickness 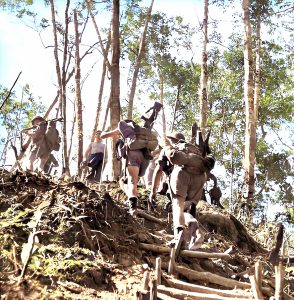 Thomas Fisher’s photograph of Australian soldiers moving along the Kokoda Trail in 1942. Fisher joined the Military History and Information Section of the Australian Army in 1941, and his work is some of the best they produced. He was killed in action in November 1942.

exceeded 4,000. Those Australians who died on the Trail are buried at the Bomana War Cemetery outside Port Moresby.

Papuans living in the villages along the Kokoda Trail prior to WWII lived a wholly traditional existence. Their only previous contact with the modern world had come with the occasional visits of Australian Government patrol officers. They knew nothing of the war or the nature of modern warfare, until it came crashing into their villages in July 1942.

Both Australian and Japanese soldiers trampled crops, destroyed huts and stole food. Terrified villagers fled into the jungle to escape the destructive battles and air raids which followed on the heels of the troops. Villages were destroyed and many villagers were killed, injured or mistreated.

The Papuans were recruited to work as labourers, carriers and scouts for both sides and executed their tasks in conditions of extreme heat and wet. Teams of carriers brought Australian supplies to the front lines and carried seriously wounded and sick soldiers back over the trail to Owers Corner.

Many worked until they dropped, and it is said that no living soldier was ever abandoned by the carriers, not even during heavy combat. Their compassion for the wounded and sick earned them the eternal gratitude of the Australian soldiers, who called them ‘Fuzzy Wuzzy Angels’.

Map of the Kokoda Trail

lives to the natives who bore the wounded in their stretchers across the tortuous trail to safety.

‘Architect of the Kokoda Trail’

Captain Herbert Thomson ‘Bert’ Kienzle was born in Fiji in 1905 of Samoan, English, German descent. In 1927, Bert moved to Papua and by 1942 he had establishing his own rubber plantation in the Yodda Valley, near Kokoda. Bert was already fluent in Motu, the lingua franca of Papua at the time, and was well-liked and respected by the local people, so he was the obvious man to put in charge of the carrier and labour lines being assembled at Sogeri for preparations being made along the Kokoda Trail.

Over the period of the ensuing battles, Bert earned accolades including ‘The Architect of the Kokoda Trail’ and ‘The King of the Angels’ and historians would say of him that without his presence the outcome of the whole operation may have been very different. 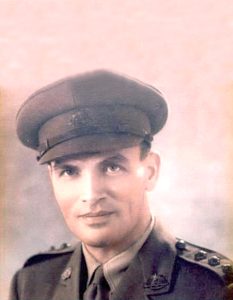 Captain HT ‘Bert’ Kienzle  in planning military and logistical strategies, and it was he who helped reduce the number of the desertions of Papuan carriers.

It was Bert Kienzle who located and named the Myola Lakes, the use of which as a drop zone for supplies proved a logistical turning point in the campaign. He also named Templetons Crossing after Captain Sam Templeton, from B Company, 39th Australian Infantry Battalion, whom he had led across the Trail in July. Bert’s local knowledge and ability to communicate with the Papuans was put to constant use by his superiors.

Following the war, he was instrumental in having a monument commemorating the contribution of the native carriers erected at Kokoda in 1957, and also to have a monument erected to honour those Papuan and New Guinea servicemen, police and carriers who served during the campaign in Papua New Guinea. It was unveiled at Three-Mile Hill, Port Moresby, on 3 November 1967, as part of the 25th Kokoda Anniversary commemorations.

While there are many memorials along the Kokoda Trail commemorating Australian soldiers, other than those organised by Bert Kienzle, there is very little that acknowledges the significant contribution of the Papuan carriers and soldiers. However, in 2018 a plaque was designed and installed by the Kokoda Memorial Foundation (KMF) in the Naduri village, halfway along the Kokoda Trail. 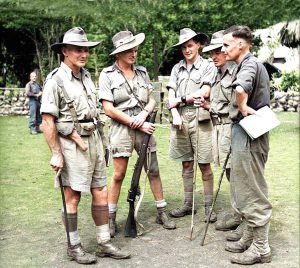 This magnificent plaque is the largest and best along the Kokoda Trail, and a great credit to the KMF for their highly professional work—all done by volunteers.

Also, in 1990 a plaque was fixed to the Sogeri Memorial at the road junction of the Kokoda Trail and Sogeri Road, in recognition of the support given by the local Ianari community.

One of the most desperate battles in Australian history was fought in August 1942 at Isurava in the Papua New Guinea Highlands. To commemorate the event, the Australian Government commissioned the design and production of a memorial to coincide with the sixtieth anniversary of the event in 2002.

Visitors approach the site from an upper pathway and their first view is of the commemorative circle, a simple geometric form in a wild landscape that boldly states: Battle of Isurava Kokoda Track 1942.

The inner segments of grey granite surround a central stone of polished granite with hand-chiselled lettering. 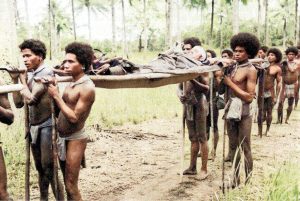 Each stone is inscribed with a single word representing the values and qualities of those soldiers who fought along the Kokoda Trail. Also, an interpretive platform looking out over the valley is concealed from the top memorial tier. This lower platform contains ten interpretive panels describing the time frame and significance of the event, while paying tribute to the local people.

This was a unit of the Australian Army raised in the Territory of Papua for service during WWII. Formed in April 1940 in Port Moresby to help defend the territory in the event of a Japanese invasion, its soldiers consisted of 550 Papuan soldiers led by 77 Australian officers and non-commissioned officers.

Following the outbreak of the Pacific War, the PIB served in many of the Allied campaigns in New Guinea; however, due to the nature of its role its sub-units mainly operated separately, attached to larger Australian and US Army units. 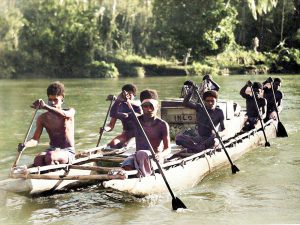 Boatmen transport Allied supplies by water and formations. Slow in forming, the first members of the PIB were not officially posted in until March 1941.

By 1942 it consisted of only three companies, all of which were under-strength and poorly equipped. It was subsequently employed on scouting, reconnaissance and surveillance patrols against the Japanese, where the natural bushcraft of its native soldiers could be used to their advantage.

The PIB soldiers were often sent on dangerous missions behind enemy lines. By blending in with the local people, they were able to gather valuable information, and in June 1942 they were sent forward to patrol the northern coast of Papua over a wide area. These small parties were the first to make contact with the Imperial Japanese forces upon their landing in Papua, before participating in the Kokoda Trail campaign.

As part of Maroubra Force, the PIB fought alongside the Australian 39th Battalion at Kokoda, Deniki, and Isurava as the Japanese forced them back along the Kokoda Trail, but was withdrawn before the campaign finally turned in favour of the Australians.

They were amalgamated with the New Guinea Infantry Battalion in November 1944. 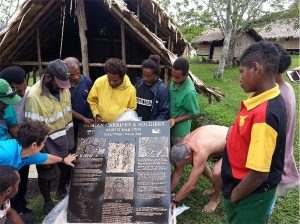 Villagers with the plaque in the Naduri village 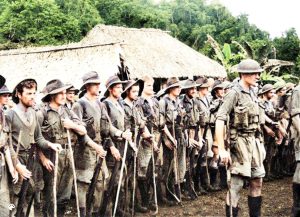 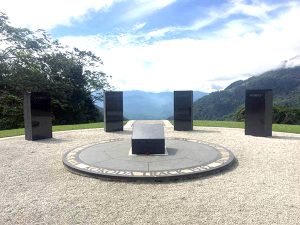 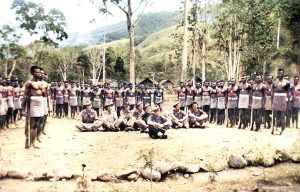 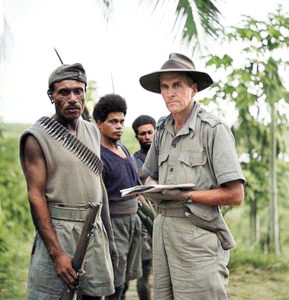