I’m putting you in command at Buna. Relieve Harding . . . I want you to remove all officers who won’t fight. Relieve regimental and battalion commanders; if necessary, put sergeants in charge of battalions and corporals in charge of companies — anyone who will fight. Time is of the essence . . . Bob, I want you to take Buna, or not come back alive . . . And that goes for your chief of staff, too.

The Battle of Buna-Gona followed the conclusion of the Kokoda Trail Campaign, and was fought by Australian and United States forces against the Japanese beachheads at Buna, Sanananda and Gona.

Both forces were riddled by disease and lacking the most basic supplies, including medicine and food.  The Japanese were under pressure to hold Guadalcanal, which had forced them to withdraw their forces when they were within sight of Port Moresby. Since arriving in June on the north coast, the Japanese had built hundreds of well-camouflaged, reinforced bunkers in mutually supporting positions blocking all available approaches.

Combined with the forces who had returned from the Kokoda Trail, the Japanese initially had nearly 5,500 troops on the northern coast. This rose to about 6,500 later in the battle.

Because of poor intelligence, Supreme Commander MacArthur and his staff vastly underestimated the number of defenders and the superior quality of the Japanese defensive system—referred to as ‘hasty field entrenchments’. 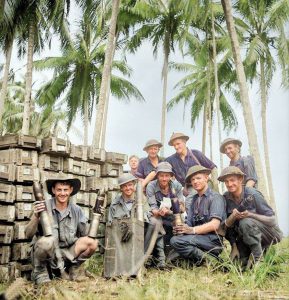 When the Allies attacked on three fronts beginning on 16 November, they were immediately stymied by the excellent Japanese defensive position. The Allies suffered heavy casualties and gained virtually no ground. They had only a few artillery pieces and their mortar ammunition was so limited it was rationed. Although requested, the Allies lacked tank and naval support. They received only partially effective air support.

MacArthur repeatedly expressed his dissatisfaction with the US 32nd Infantry Division’s inability to defeat the Japanese. On 29 November, after thirteen days of poor results and high casualties, he ordered Lieutenant General Eichelberger—commander of the US I Corps in the South West Pacific Area—to relieve Major General Edwin F Harding along with most of his regimental and battalion commanders.

Harding was replaced in turn by, first, his former artillery commander Albert W Waldron, then Eichelberger’s Chief of Staff Brig. Gen. Clovis E Byers, and finally by Eichelberger himself. Only then did Eichelberger fully appreciate the difficulty faced by the Allies in overcoming the Japanese forces. He learned that the majority of his troops were sick with a variety of illnesses including malaria, dengue fever, bush typhus, and tropical dysentery.

Supplies, including food, were a major problem for both the Allied and Japanese forces. The Japanese were at first resupplied by destroyers who slipped through from Rabaul, and later by submarines that arrived by night, until the Allies’ increasingly effective air and naval forces cut off further supply. After the battle ended, the Allies found evidence of cannibalism among the Japanese. 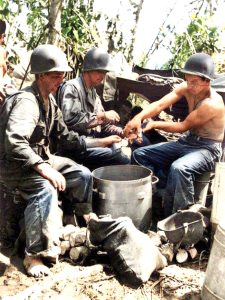 Soldiers at Buna preparing a hot meal of ‘jungle stew’

The Allies were at first supplied only by air drop and by sea until they could build rough airstrips at Wanigela and then Pongani. Even then, they remained short on ammunition, medicine, and food. Some US troops were reduced to a small portion of a C ration each day.

The Allied forces only made significant progress when they were finally given the tanks and artillery they had long sought. On 2 January 1943, they captured Buna, and on 22 January, after prolonged intense fighting in extraordinarily difficult conditions, the Allied forces killed or captured almost the entire defending Japanese forces. Only a few hundred escaped to the north. Casualties on both sides were extremely high. General Eichelberger later compared the casualty rate to that of the American Civil War. As a percentage of casualties, killed or wounded in action at Buna exceeded the better-known Battle of Guadalcanal by a margin of three to one.

A brass memorial plaque was placed between Soputa and Sanananda, and the Japanese also erected a monument commemorating their soldiers’ struggle there. The Australians placed a plaque in memory of their fallen comrades: 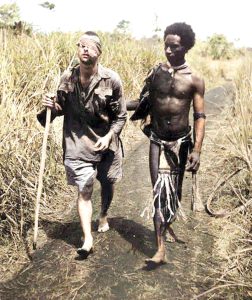 George Silk’s famous photo for Life Magazine of a Papuan orderly leading wounded Australian soldier, Pte Whittington, to the base hospital in Buna

The memorial at Popondetta, capital of Oro (Northern) Province, commemorates the service and sacrifice by Australians, Papua New Guineans and their Allies in the Battle for Buna, Gona and Sanananda in 1942–43. The upgrade, completed in October 2002, involved a significant refurbishment of the existing memorial and the construction of a new pavilion at the entrance to the park.

The original structure built in 1962 featured seven battle notices, which were relocated to the site from Buna, Buna Old Strip, Cape Endaiadere, Giropa Point, Gona, Sanananda Point and Wye Point, so that they could be preserved at a central place of commemoration.

Plaques were erected at Kingscliff NSW, and Townsville QLD, detailing Australia’s involvement and commemorating the contribution of South Sea Islanders to the defence of Australia.

The Battle of Buna during the defence of Australia in New Guinea saw both sides battle stubborn resistance, harsh jungle, and treacherous mountains. The casualties on both sides were staggering, with the Allies suffering 6,419 killed, wounded, or missing at Buna. Comparatively, on Guadalcanal the Americans suffered 5,845 total casualties. The Japanese at Buna/Gona lost 8,546, nearly all of them killed. Senior commanders in the Japanese Army later referred to the New Guinea campaign as ‘a magnificent tragedy’. 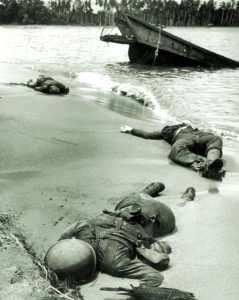 Both the Americans and the Australians were exhausted from their victory. There would be no new offensive operations on New Guinea for six months. When fighting began again, pockets of Japanese along the north shore would be bypassed altogether and left to starve in the jungle. The Allied strategy of ‘Island Hopping’ grew in part out of fear of another Buna.

Subsequent battles of World War II would take higher death tolls on both sides, but never again would Allied armies go into battle as unprepared as they were at Buna.

For months after American photojournalist, George Strock, made his now-iconic picture, ‘Dead Americans at Buna Beach’ (below), Life Magazine’s editors pushed the American government’s military censors to allow the magazine to publish that one photograph. The concern, among some at Life Magazine and certainly many in the government, was that Americans were growing complacent about a war that was far from over and in which an Allied victory was far from certain. A 25-year-old magazine correspondent in Washington named Cal Whipple refused to take no for an answer from the censors and he ‘went from Army captain to major to colonel to general, until I wound up in the office of an assistant secretary of the Air Corps, who decided that it had to go to the White House.’ 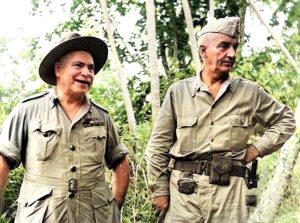 In the 20 September 1943 issue of Life Magazine, in which the famous photo first appeared (and in which it was given a full page to itself), the editors made the case to the magazine readers for publishing the picture—even if it took the better part of a year to bring the censors and President Franklin Roosevelt himself around to their way of thinking—and, in part, the editorial read:

Why print this picture, anyway, of three American boys dead upon an alien shore? Is it to hurt people? To be morbid? Those are not the reasons. The reason is that words are never enough. The eye sees. The mind knows. The heart feels. But the words do not exist to make us see, or know, or feel what it is like, what actually happens. The words are never right … 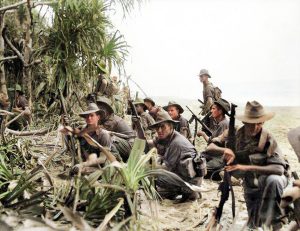 The reason we print it now is that, last week, President Roosevelt and [Director of the Office of War Information] Elmer Davis and the War Department decided that the American people ought to be able to see their own boys as they fall in battle; to come directly and without words into the presence of their own dead. And so here it is. This is the reality that lies behind the names that come to rest at last on monuments in the leafy squares of busy American towns.

After the Battle of Milne Bay and the recapture of Gona and Buna in late 1942, the campaign continued, and from 1943 to 1945 Australian and American forces launched major offensives against the Japanese occupying New Guinea.

Among the battles fought were those at Wau, Salamaua and Lae, raids were conducted at Japanese-held Rabaul and the fighting culminated with the Aitape-Wewak Campaign, in northern New Guinea.

Although ultimately successful with the Japanese forces cleared from the coastal areas and driven inland, amidst difficult jungle conditions, casualties from combat and disease were high.

The End of the War

The final Japanese surrender in New Guinea came one month after VP Day (on 15 August 1945). It marked the end of the war against 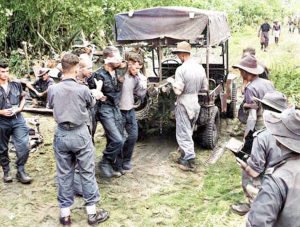 Japan in the Pacific and the end of World War II. However, as celebrations reverberated around the world, isolated groups of Japanese continued fighting in PNG.

In the Aitape-Wewak region, General Adachi of the Japanese XVIII Army had vowed to fight to the end. It was not until 13 September, almost a month after VP Day that he surrendered to Major General HCH Robertson, of the Australian 6th Division, at a ceremony at Cape Wom, near Wewak.

By then General Adachi’s once proud army of 100,000 men had been reduced to about 13,000. His men died on the battlefield, from disease and from starvation. Earlier the Japanese had defended Wewak with utmost heroism.

At the end, fighting from caves in the cliffs, many Japanese refused to surrender and were sealed beneath by explosive charges set off at the entrances.

Several hundred 6th Division troops were present at the surrender ceremony, when General Adachi was ordered to hand over his sword. He appeared very taken aback before taking two paces to the rear, stopping for a few moments, then handing his sword to General 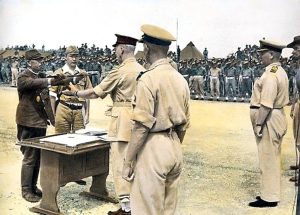 After the war, General Adachi was convicted of war crimes and sentenced to life imprisonment, but he committed suicide in 1947.

Japanese War Crimes Trials took place in Rabaul over three periods from December 1945 to August 1947. Of the 188 trials, 390 Japanese accused war criminals were tried, and 266 were convicted. Of those, eighty-four were hanged and three were shot. The location of the graves of the criminals was never revealed even after overtures from the Japanese Government in the 1970s.

The Aitape-Wewak campaign, along with the campaigns on Bougainville and New Britain, came in for considerable criticism from both Australian and Japanese officers, who found it difficult to understand why such aggressive actions should be fought as the war was ending. 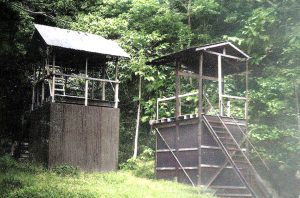 HH Hammer, referred to the ‘military futility’ of the campaigns. Japanese staff officers on Bougainville believed the campaigns were ‘absolutely pointless’, and that world prestige gained by Australia would not compensate for the loss of life and equipment. On the other hand, it was argued that the campaigns were justified as there was an obligation to liberate the people of PNG as quickly as possible from Japanese rule. In many areas, Japanese occupation was creating terrible privation.

It is likely that these campaigns were fought because General Blamey wanted to continue in command of a large army in the field, and because John Curtin, the then Prime Minister, and certain members of his Cabinet believed that a continued active fighting role would strengthen their position  in the coming treaty negotiations.