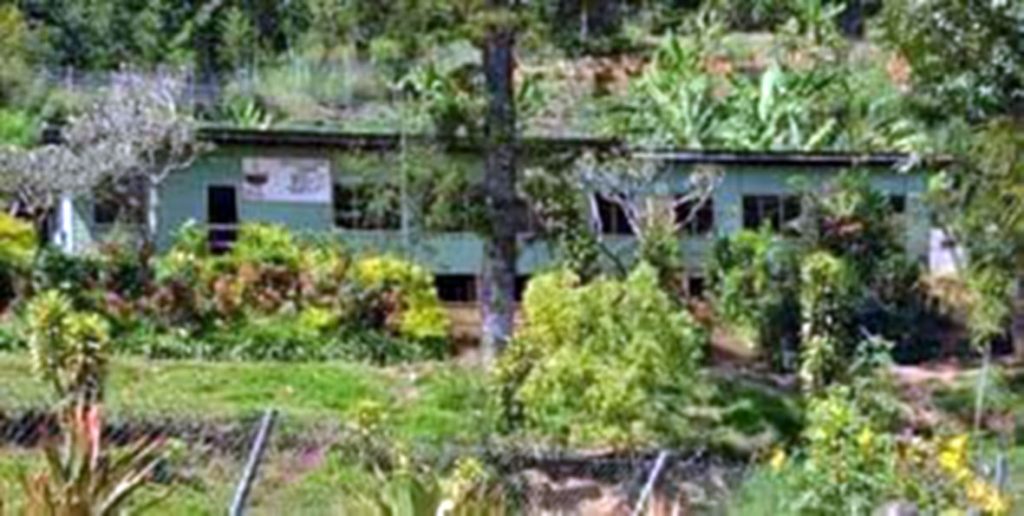 The old Goroka Hospital, enveloped in lush green. I did not know it at the time, but the upper level was reserved for the ex-pats whilst the lower, with its hard dirt floor, was for the Melanesians.

In 1968 I spent two months working for the Public Health Department (PHD) of the Territory of Papua and New Guinea (TPNG) in the so-called ‘old’ (i.e. first) Goroka Hospital (c.1953–69), situated in the central highlands of TPNG.

My family and I, including a six-week old daughter, arrived in Port Moresby on New Year’s Day, stayed overnight, then flew to Goroka via Lae. At the time, Goroka airport was one of the busiest airports in the world, being the only way in and out of the Highlands. We moved into our new residence in town, a comfortable little house on stilts, in the ‘Queenslander’ style. We inherited Dusty, who was our well-paid houseboy helper during our stay. 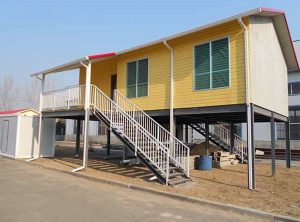 Traditional and ‘affordable’ house in Goroka, similar to the one I lived in for eight weeks in early 1968

On my very first day in Goroka I had the opportunity to fly to nearby Kundiawa to pick up some medical casualties. The airport was closed due to an approaching storm immediately after we took off from Goroka in a four-seater Cessna. I recall very well the rather scary trip to Kundiawa, flying between very high mountains which, thankfully, could not be seen through the dense surrounding rain clouds. The pilot took pleasure in leaning forward in his seat to see outside, from time to time pointing out crashed planes. He told me that ‘in TPNG, there are only two types of pilots, good ones and dead ones’. Having spoken with a veteran PNG pilot from Geelong, where I lived for two years after returning from North America where I lived for twenty-five years, I have no doubt that this is true.

As we approached our destination, I was very relieved to see the green surroundings of the Kundiawa airstrip emerging through the clouds and mist. The runway sloped up towards a tiny terminal where our medical casualties awaited us. When we returned to Goroka the next day we took off down the runway towards a menacing cliff face, passed a crashed plane on our left (if I recall well) then swerved sharply upwards and to the right to avoid running into the cliff.

My appointment at the hospital was as junior registrar in medicine, which meant that I tagged along with the Senior Registrar, Dr Bill Pigott, who was rotating from the now ‘old’ Sydney Hospital where, three years later, I sat my oral exams that qualified me as a Member of the Royal Australasian College of Physicians. The Chief of Medicine was Dr Frank Rhodes, a self-described refugee from South Africa, who told me that ‘he and his wife had twenty-three years of bliss, then they met’. Frank lived alone—more or less—and played golf every day at four o’clock, sharp. His caddy was one of the local youths who worked in the hospital as a medical orderly (between golf rounds).

I had come to the Goroka Hospital to see some exotic old-world medicine, but also to look for patients with goitre due to iodine deficiency. With the help of a patrol officer, whose name I forget, several ‘volunteers’ were rounded up and taken by truck to the hospital for ‘donation’ of their blood, which was sent to Adelaide for our research studies. Fifty-three years later we are still waiting for these samples to arrive. 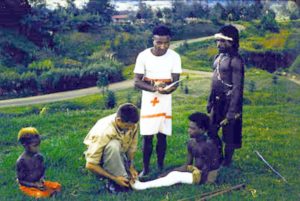 Historic photograph from the University of Queensland library archives of a typical scene outside the old Goroka Hospital, namely a missionary observer, a patient with a leg problem, a child and adult presumably related to the patient and the attending medical assistant

During the 1960s our research team, headed by the late Professor Basil Hetzel, carried out research in the nearby Jimi Valley, on patients with a new neurological disorder manifest as muscle spasms of the legs (giving a cross-legs appearance) and mental deficiency, caused by iodine deficiency, known in Pidgin as long-long. These people were to be found working in domestic gardens. My MD thesis research, which I began on my return to Adelaide, was to be an extension of this work

My role as junior registrar was to listen and learn and to encourage and support the patients and their families, some of whom stayed with their sick relatives, helping with their management and sleeping on the dirt floor under their beds. I also helped the paramedical staff from whom I learnt a lot about how to manage patients with serious illnesses in a very rudimentary health system run by medical assistants and largely self-trained nurses and nurse assistants.

The doctors who worked at the old Goroka Hospital lived in the nearby woods, often with their exotic pets including, in one case, a rather handsome but aggressive (presumably the reason it was chained to a tree) cassowary. Their social life consisted of house parties, story-telling and drinking. The conversation was always interesting and reflected the personality of doctors who had escaped Australia for a romantic and challenging life in the Highlands of TPNG. Some of the doctors were escaping from broken relationships, the stress of ‘modern Australian medicine’ or ‘family situations’ (such as a general practitioner who had absconded from a well-known Adelaide medical family and described himself as the ‘black sheep of the family’).

One young doctor, who had been a researcher in Melbourne, was fleeing from a broken relationship to work for the TB screening unit of the PHD. By day he read mini chest X-rays and by night he listened to Beethoven in his small house in the woods. I recognised him as a true ‘romantic’ looking for something different and exciting but suffering in the meantime. Then there was Long John Pasquarelli, patrol officer and later politician, whose brother Leon was a friend and medical colleague in Brisbane.

Some of the exotic medical conditions that I saw during my time at the old Goroka Hospital included cerebral malaria, cerebral tuberculoma, blackwater fever (a severe, life-threatening form of malaria), syphilis, pulmonary tuberculoma and a deformity of the legs caused by yaws, conditions which were rarely seen in Australia at that time (and since). There were also many cases of more mundane conditions such as rheumatic heart disease, pneumonia, bacterial and viral infections and malnutrition. And, of course, many patients, and indeed some of the staff, had goitres due to the severe iodine deficiency that was endemic in the Highlands, the reason that members of the University of Adelaide thyroid research group had been working in the area for many years.

I also had the opportunity to learn from the hospital surgeons about a common and often fatal bowel disease called pig bel, an acute abdominal condition characterised by patchy intestinal gangrene without obvious vascular or mechanical cause. Pig bel* was associated with eating huge amounts of partly-cooked pigs. Pigs could be seen wandering all over town and even in the hospital grounds. The first surgeon to operate on pig bel cases was Dr Lajos Roth, but the chief surgeon at this time was Dr Frank Smith (1960–78), a legend in the Highlands for his work as a tireless and expert surgeon carrying out his trade under difficult conditions, as well as for being a pleasant and interesting raconteur. His wife was the hospital obstetrician; as the reader can imagine, she was often expected to deal with some extreme pregnancy and labour situations that were only rarely seen in Australian hospitals. The infant mortality rate was, as expected, very high but was improving steadily due to her heroic work. The anaesthetist was from Brisbane, as were most of the nursing staff.

Twenty years later, AIDS found its way into independent PNG and, as I write this report, the number of COVID-19 cases has surged to crisis point in the country and, with international help, a vaccination program is underway. The old Goroka Hospital, its medical and nursing staff and the diseases that they treated, have largely passed into history.  The old hospital has been replaced by a new medical centre, which has links with the PNG College of Medicine (Port Moresby) and the Goroka University. With the opening of the new Goroka Hospital came modern diseases. The ten most common cause of death in PNG today are lower-respiratory infection, ischemic heart disease, stroke, chronic obstructive pulmonary disease, diabetes, road injury (which did not surprise me), iron-deficiency anaemia, asthma and diarrhoeal diseases. Sadly, we must now add COVID-19 infection which may top them all.

Life in Goroka town itself was interesting and very different from my home town of Adelaide. No surprise there, eh! We enjoyed visiting the market, sightseeing and meeting the locals. On one memorable occasion we were offered four coconuts in exchange for our small, pink-skinned, daughter. We tried bargaining but, in the end, we kept her.

I recall that many of the people walked long distances in the surrounding countryside often eating, or selling, cucumbers, which were plentiful and mouth-watering. On one occasion, we took a car trip along the road to Kundiawa, but were forced to turn back because the road had disappeared into the adjacent valley, a not uncommon event we were told. And yes, we had the opportunity to see a sing sing and meet the inevitable German tourists looking for something unique and extreme. Or perhaps it was that they had some link with the past when PNG was under German control.

Although my stay in Goroka was brief, I was there long enough to understand the challenges of health care in a developing country. Hopefully, I also contributed in a small way to the evolution of health care delivery in the area, not only through our research into iodine deficiency disorders in the PNG highlands, but also in the day to day running of a traditional regional hospital with dirt floors and historic diseases. I also learned that there was more to PNG than Sepik masks, the mystery of David Rockefeller’s disappearance, cargo cult, the missionaries who ‘came to do good and did bloody well’ and the Kukukuku headhunters.