I learnt about cargo cults during teacher training at the Australian School of Pacific Administration (ASOPA) and, while teaching at Maprik High School, fifty years ago in 1971, I encountered one. Its focus was Mt Turu in the Yangoru area of the East Sepik Province. Mt Turu is one of the peaks in the Prince Alexander range of mountains between the north coast and the Sepik River.

A team from the United States Air Force had, in the early 1960s, set up a concrete trigonometric marker on the top of the mountain to aid mapping. Cult members, suspicious of the marker’s presence, believed that its removal would ensure the release of the wealth and goods that were trapped inside the mountain. This bounty could all be magically observed by viewing the mountain through a used flash cube that a photographer had discarded, and a cult member had rescued. It was all set to happen on Wednesday, 7 July 1971—the seventh day of the seventh month. The cult developed within an organisation known as the Peli Association that was headed by the charismatic Matthias Yaliwan, who lived in Ambukanja village up high on the side of Mt Turu.

Peli Association adherents, numbering some 60,000 eventually, prepared for the event by reorganising their villages by constructing a settlement, which had houses and small token garden plots. There were imitations of bureaucracy with villagers inhabiting ‘offices’ and distributing meaningless pieces of paper as if engaged in general office work. Unmarried girls, termed ‘flowers’, were employed to ‘paitim dis’ to ensure the increase of contributions given by cult supporters. This activity involved the constant movement, day and night, of coins in metal dishes. Cult workers communicated with each other using telephones made of tin cans and string. Large crates painted white to represent refrigerators stood in corners, ready to be filled with beer when the great day came.

The name of Agatha Christie, the author (above), somehow, became caught up in the cult. After all her surname contained the name of the saviour—Christ. The 50-cent piece issued in 1970 to commemorate the bicentenary of Captain Cook’s landing in Australia (above) became a cult item, too. The reverse of the coin bore an image of Captain Cook which cultists claimed instead to be that of Agatha Christie.

The Administration and the missions were concerned about what might happen on 7 July and there was much interest from journalists. The Second Battalion of the Pacific Islands Regiment, based at Moem Barracks in Wewak, conducted rehearsals of what would happen if the civil authorities were unable to cope and had to call in the military to restore order.

The Administrator, David Hay, visited Maprik in May 1971 and called in to see us at Maprik High School. He assured us the Administration was watching the situation. When his motorcade left the school, on the way to Hayfield airstrip, our students ran towards the vehicles, throwing flowers, leaves and fronds at the car. Secreted in one of the bouquets was a stone which hit his car. If that happened today, there would probably be a full anti-terrorist reaction. Hayfield airstrip was named after David Hay, who had served there during World War II.

7 July dawned. At Maprik High School we kept on teaching but kept one eye on the road and an ear to the radio to see what would happen. Everything was very quiet in the normally buzzing Maprik township five kilometres away and attendance at Maprik Primary School was noticeably smaller. Journalists atop Mt Turu settled down to witness the events. Despite the fact that it was clearly against the law to interfere with such markers, the authorities had decided to be present but to do nothing to stop the removal of the concrete trig marker. After it had been solemnly removed it was taken down the mountain in a ceremonial procession, in complete silence. Thousands of local people watched with a mixture of awe and uncertain belief as it was carried along and presented to the Assistant District Officer at Yangoru Patrol Post.

Needless to say, none of the predicted bounty of cargo appeared. There was no miraculous increase of game in the bush. There were sporadic attempts to try again, to determine a different date or conclude that the cult adherents had not performed certain requirements and that the cargo would turn up later. But over the following months the cult dissipated and disappeared. We resumed normal activities at the school and life went on.

Not long after the trig marker’s removal I joined Bruce Skinner, kiap, and Paul Dennett, the Maprik Primary School headmaster to go over to Yangoru and visit Matthias Yaliwan in his village on the mountainside. Arriving there and dealing with the formality 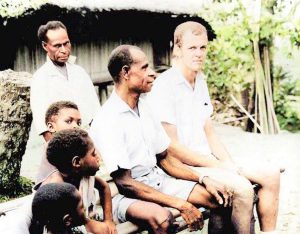 that attended this made us feel as if we were pilgrims seeking an audience with a sage. Yaliwan appeared and confounded our expectations—no arm waving or extravagant claims. He presented a modest and dignified demeanour, freely answering our queries. We didn’t prepare our questions beforehand nor unfortunately did we make a record of his responses.

At the House of Assembly elections early in the following year, Matthias Yaliwan swept to an easy victory in his electorate. Unembarrassed at the failure of the cult, Yaliwan’s new message involved swift independence, with himself as father of the new nation. He received very little support from fellow parliamentarians and he soon retreated from the public stage.

It was instructive and fascinating to be so close to one of the events that we had only heard about in anthropology lectures.

Acknowledgement: I thank Paul Dennett, then headmaster of Maprik Primary School, for help in the preparation of this story.