In 1951 the reorganisation of the administration of the New Guinea territories by the Commonwealth Government meant that many people who had worked there before the war, and those who now worked for the new, combined Territory of Papua and New Guinea were without a body to represent their interests after retirement. There was an existing Retired Officers Association of Papua but its constitution did not allow it to represent retirees other than those who had worked in the Territory of Papua.

The result of that circular was a meeting held on 19 March 1951 at History House, Young Street, Sydney. This meeting established the Retired Officers Association of Papua and New Guinea (ROAPNG). More than fifty people joined.The first step in creating such a representative body was the distribution of a circular to people who had retired after working in the Territory of Papua, the Territory of New Guinea or the recently established Territory of Papua and New Guinea. The names of these people were provided by the Department of Territories in Canberra. The circular, dated 4 February 1951, was signed by four people: EW Bastard, JT Bensted, LW Brown and JF Fitzgerald, and asked recipients to let the signatories know if they were interested in the formation of a retired officers’ association. The circular included the objectives of the proposed association and said that an annual subscription of five shillings would be payable.

The office bearers elected to the first committee were: President JT Bensted, Vice President EW Oakley and Secretary/Treasurer R Melrose. Committee members were: EW Bastard, EW Taylor and LC Roberts. The foundation committee included retirees from both the Territory of Papua and the Mandated Territory of New Guinea.

JT Bensted, the first president of the association, joined the administration of the Territory of Papua as a clerk in the government stores in 1900. By 1912 he had returned to Sydney with an appointment as agent of the government of Papua. In the early 1920s he was back in Port Moresby in the Department of Public Works. He was Acting Director by 1922 and Director not long afterwards. 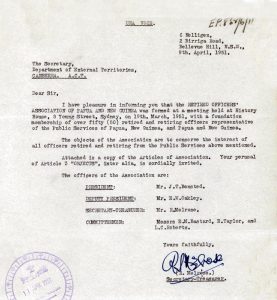 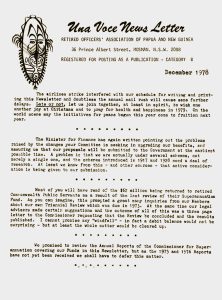 As Director of Public Works he was responsible for the planning and construction of some of the early permanent public buildings of Port Moresby. These included the post office and the general hospital.

Bensted seems to have left Papua by 1930. His whereabouts and activities between then and the 1950s are, so far, not known.

In the 1950s, apart from his role in the establishment of ROAPNG, he was a regular correspondent to the Pacific Islands Monthly and the Sydney Morning Herald. He signed some of this correspondence as ‘Formerly Agent of the Government of Papua, Director of Public Works and member of the Legislative and Executive Councils’.

EW Oakley, the vice-president, was an officer of the Department of District Services and Native Affairs for twenty-five years. He was District Officer at Madang from 1936 until the Japanese attacked the country. He then returned to Sydney. He was active shortly after the Second World War promoting the Victory Loan Appeal.

R Melrose, the secretary/treasurer, was head of the Department of District Services and Native Affairs in the administration of the Mandated Territory before WWII and Government Secretary, TPNG, after the war. He had been a member of the Australian Naval and Military Expedition during the first World War.

Just before the war Melrose, then a member of the Legislative Council, chaired a commission of enquiry into native labour in the Territory of New Guinea. Established in 1939 this enquiry reported in 1942.

During World War II, following the heavy bombing of Salamaua, which was seen as a prelude to landings there, Melrose led a party of civilians, who were physically unfit to travel overland, in a most hazardous escape trip, which started along the New Guinea coast in two small boats and canoes. The party survived the dangers of the journey and landed on the north coast of Papua, from where they made their way inland to Kokoda and thence by air to Port Moresby.

EM Bastard was a resident magistrate in Papua before World War II.

The 1928–29 Annual Report of the Territory of Papua includes a report of Bastard’s patrol inland from Kerema, which followed the murder of six men of the Murua River area. Earlier he had been Resident Magistrate at the Abau post. 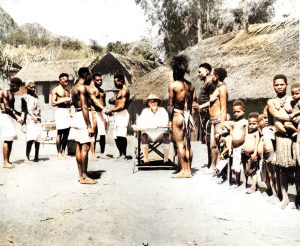 Medical patrol in the Highlands, 1950s

E Taylor, MBE, a long-serving officer of the Department of District Services and Native Affairs was a key figure in the evacuation of civilians from Lae and Salamaua as described in Ian Downs’ book, The New Guinea Volunteer Rifles—a History 1939-1943.

The Daily Telegraph, Sydney, reported on 2 February 1937 that Edward Taylor, District Officer Salamaua, was the first officer of the New Guinea Civil Administration to be honoured by the King with the award of the MBE. It went on to say that Taylor had first gone to New Guinea in 1914 and, until 1921, served with the military administration. Two years later he was appointed District Officer. In 1924 he led the patrol into the Upper Waria River area which enabled the opening of the Wau-Bulolo goldfields. 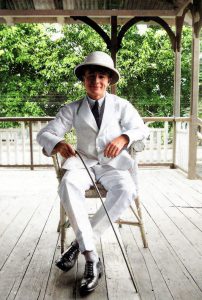 LC Roberts was a draftsman in the Department of Lands and Mines of the Territory of New Guinea in 1922, becoming Director of that Department before the onset of World War II. In 1948 he was appointed Chief Claims Examiner of the War Damage Commission.

As these people emerge from the mists of history we acknowledge with pride and gratitude their contributions to the development of Papua New Guinea and their initiative in establishing our association seventy years ago.

Acknowledgements: Information about the formation of ROAPNG in 1951 came from National Archives of Australia Digital file, ‘Retired Officers’ Association of Papua New Guinea; series 452’. Other biographical details of the members of the first committee came from Trove, the National Library of Australia. More details were provided by Phil Ainsworth, Quentin Anthony, Bev Melrose, Chris Warrillow and Andrea Williams. 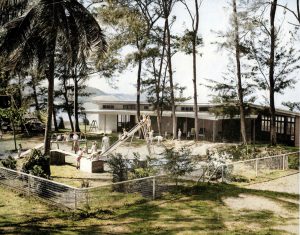 The ROAPNG was incorporated under the NSW Associations Incorporation Act of 1984 in March 1996 under the leadership of President Harry West. In the following years, the associate membership base was broadened to include ‘former residents of Papua New Guinea or other persons subscribing to the objectives of the association’ and, with the vision and initiatives of Harry West and Treasurer Ross Johnson, the objectives widened to include ‘friendly association of members, encouragement of contact and friendship with Papua New Guineans’, and much more. These amendments were agreed upon by the members and, on 16 December 2002, the name was formally changed and registered as the Papua New Guinea Association of Australia Inc. 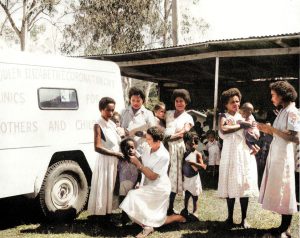 Since then, the role of the association has progressively broadened and changed to include activities such as supporting projects in PNG; working to strengthen the civil relationship between Australia and PNG to ensure the solid foundation built when Australia developed Papua New Guinea to become an independent nation is long recognised; as well as facilitating communication, interaction and education about Papua New Guinea. 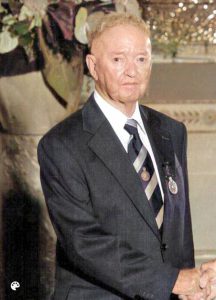