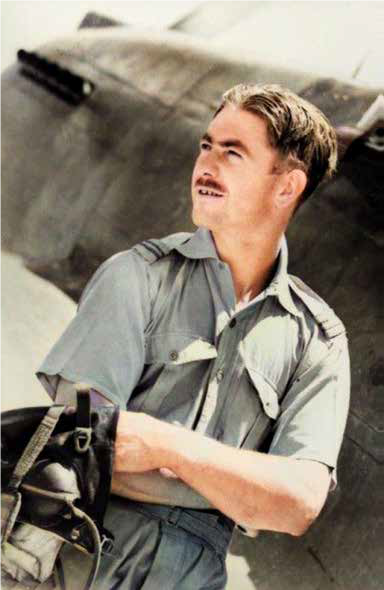 He was called ‘The Flying Cowboy’ and was known for his ‘magnificent fighting spirit and great skill’ during the Second World War but, to his family, Squadron Leader Peter Turnbull was the much-loved son and brother who gave his all for his country during the fighting at Milne Bay 80 years ago.

The commander of No. 76 Squadron, RAAF, Turnbull was just 25 years old when his Kittyhawk crashed in the jungle while on a mission to spot and attack enemy tanks that had been causing heavy casualties on the ground. He was killed instantly, but his remarkable courage and skill were never forgotten.

Peter St George Bruce Turnbull was born in Armidale, in the New England region of New South Wales, on 9 February 1917 and was raised on the family property near Glen Innes. The Turnbulls were well-known graziers in the region, and life on the land suited Peter.

Peter was working as an electrician in Glen Innes and serving as a trooper in the 12/24 Light Horse Regiment of the Militia when he enlisted in the Royal Australian Air Force in January 1939. He was undergoing pilot training at Point Cook in Victoria when the Second World War broke out in September. He was soon posted to No. 3 Squadron, a fighter squadron that specialised in co-operation with ground units.

In July 1940, the squadron marched out from Richmond to the tune of ‘Roll out the Barrel’ before embarking for the Middle East and North Africa. It was in Egypt that the squadron was equipped with Gloster Gladiator aircraft and Peter first made a name for himself as a top fighter pilot.

He served with great distinction through the Syrian Campaign of June and July 1941, and in October 1941 he was awarded the Distinguished Flying Cross for his actions. The citation read:

This Officer has carried out 116 Operational sorties involving 200 hours of flying. One day in April of 1941 his formation engaged 16 enemy aircraft which were attacking our troops. [Flying Officer] Turnbull personally destroyed three Messerschmitts in the combat. He has destroyed eight enemy aircraft in the air and inflicted considerable damage to aircraft on the ground, as well as [to] mechanical transports and troops. Throughout [he] has shown magnificent fighting spirit and great skill.

When Peter returned to Australia in December that year, he was greeted with much fanfare by the Mayor of Glen Innes and about 150 townsfolk who wanted to wish him well and welcome him home.

He told a civic reception at the local town hall:

I’m not much good at making speeches. I’m better at drilling men I guess … The Squadron I have been with is entirely manned by Australian personnel, it has made a name for itself, and the credit is due not only to the pilots but the ground crew as well … Just because I got the DFC it does not mean I won it myself. The whole squadron helped … We must have every man available, and the more the better and the quicker it will be over. The lads over there are a grand bunch of boys and are doing a grand job. I have been away 18 months. It has been a great experience, and I wouldn’t have missed it for anything. I am sure all the returned men here know how I feel—what it’s like to get home after a real go, a real ding-dong fight.

In March 1942, Peter joined 75 Squadron in New Guinea under Squadron Leader ‘Old John’ Jackson, another veteran and ace from 3 Squadron in the Middle East. Equipped with P-40 Kittyhawks, 75 Squadron quickly became engaged in the defence of Port Moresby, one of the crucial early battles in the New Guinea Campaign. Shortly after, Turnbull was appointed commanding officer of 76 Squadron and promoted to squadron leader. 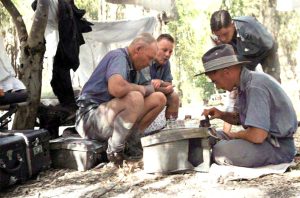 Peter Turnbull playing chess with Squadron Leader John Francis Jackson DFC—a distinguished fighter pilot, he was killed in action on 28 April 1942 during a flying battle over Papua New Guinea and is buried in Bomana War Cemetery. Jackson International Airport, Port Moresby, is named after him

Equipped with P-40 Kittyhawks, the squadron was sent to Papua at the end of July to help defend Milne Bay. Following the landing by Japanese marines at Milne Bay on 25 August 1942, the RAAF Kittyhawks of 75 and 76 Squadrons played a crucial role, destroying Japanese landing barges and stores; flying at treetop level they strafed enemy positions and supressed enemy movement.

Two days later, Peter was on a mission with Flight Lieutenant Ron Kerville to spot and attack two Japanese tanks that had been causing heavy casualties on the ground at Milne Bay. It was then that disaster struck. Kerville later wrote in a letter to Peter’s mother:

It was just about dusk when we took off together to attack a Japanese tank located on the roadway right on the shore of Milne Bay. Peter was in good spirits as we talked over the method of attack and as we flew out to locate the target he told me exactly what to do if my engine failed—‘hop out old boy and swim for it.’

He was really happy to be flying again after a few days on the ground. He told me to keep top cover—watch his attack and then follow him in. As I did so, I saw his aircraft dive from about 600 feet and from about 500 yards out to sea.

His guns opened fire in a long burst—tracer could be seen flying in all directions from the tank and I could not tell whether it was return fire or Peter’s own fire. He carried the dive very low and his aircraft, during the recovery, turned over—hit the trees and disappeared into the dense undergrowth.

I called up on the radio in the hope that perhaps he was not badly hurt—but, fortunately, he was killed instantly, for which we were all thankful as the target was 400 yards inside enemy territory. The thought of him being in Japanese hands at that stage of the struggle was not a pleasant one. Although he has passed on, I assure you Peter’s spirit still lives in the squadron of which he was so proud—we will never forget him. 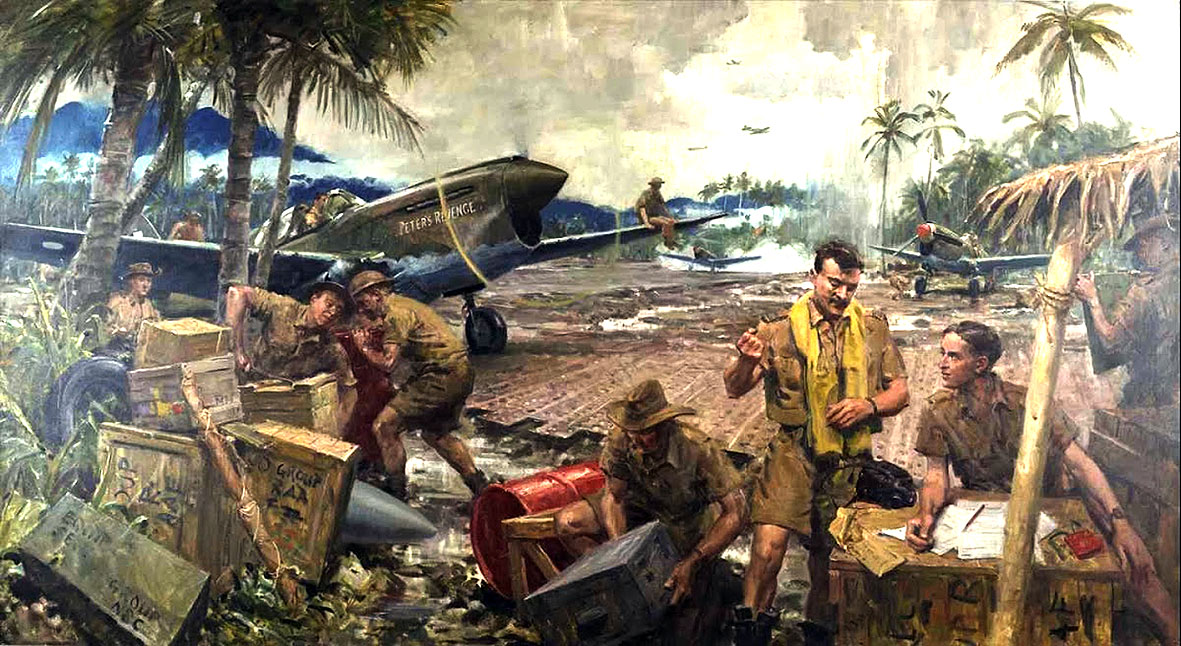 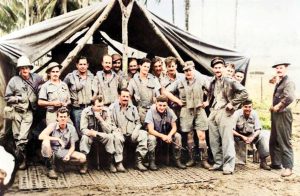 Members of 76 Squadron outside a tent at Milne Bay. Peter Turnbull is pictured fifth from right

Eight days later a patrol from the 2/12th Battalion found the plane near Kabi Mission and recovered his body from the wreckage. He was buried in a temporary cemetery at Milne Bay, marked by a wooden cross, and was later re-interred at the larger Bomana War Cemetery in Port Moresby.

Such was the regard in which he was held among pilots and troops on the ground, the official historian later wrote:

Soldiers much admired and appreciated the work of the two RAAF squadrons and, for them, the gallant Turnbull had epitomised the courage and skill of all the airmen.

Australia’s defeat of the Japanese at Milne Bay owed much to the RAAF and men like Peter; their Kittyhawks sank enemy landing craft and shipping, destroyed stockpiles of supplies, and suppressed enemy troop movements. Such was the importance of 75 and 76 Squadron that Major General Cyril Clowes specifically 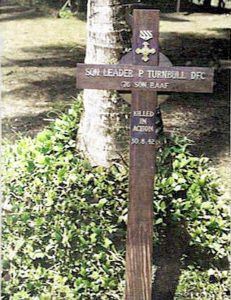 praised the RAAF’s untiring and courageous work which earned the admiration of all. The Commander of New Guinea Force, Lieutenant General Sydney Rowell, noted that the actions of the two RAAF fighter squadrons were the battle’s ‘decisive factor’.

After Peter’s death, Milne Bay’s No. 3 strip was renamed Turnbull Field in his honour. It marked the furthest westward advance of the Japanese in the area, and was a lasting reminder of his remarkable courage and bravery.

Kerville later wrote in his diary at Milne Bay:

During all operations in this area, [Peter’s] leadership judgement and organising ability have been an inspiration. Never still, he provided a wonderful example to all.

Official war artist, William Dargie, inscribed ‘Peter’s Revenge’ on one of the planes in his 1969 painting, ‘RAAF Kittyhawk Squadron at Milne Bay, August–September 1942’, as his own personal tribute to the much-loved squadron leader (previous page).

Back home, Peter’s parents were devastated by his death, but were somewhat comforted by the letters they received from his friends and colleagues. In a letter to Peter’s mother, Leading Aircraftsman Doug Cox said Peter’s deeds

. . . stirred everyone . . . he just ceased being an officer and became our hero and real friend.

He enclosed a poem that included these lines:

But pilots say when the dusk is grey
And the sunset fires grow dim
That Turnbull flies in those cloudy skies
And angels smile on him.

He was one of the most outstanding pilots and personalities of the original 3 Squadron and was well known throughout the Middle East.

His name was legend on the Northern fronts. It was with deep regret and bitterness that we learnt of Pete’s death in action. His manner and sense of duty were an inspiration to all. Australia has lost one of its finest men.