Sad to read in the December 2021 edition of PNG Kundu of the passing of Denys Faithful. He was indeed a famous artist, aviator and kiap, and he was one of those lovable denizens in the Parthenon of colourful characters of pre-Independence Papua New Guinea (PNG). 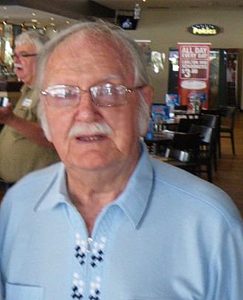 And amongst the myths and legends of the pre-independence legal fraternity of PNG, Denys is well remembered in a Supreme Court case known unofficially as ‘The Faithful Committal’.

To set the parameters of this story it is first necessary to understand the multifunctional world of the kiaps. In the isolated communities in the Highlands or the islands of pre-independent PNG, it happened that just like Saint Paul (1 Cor. 9:19–22) the kiap had to be all things to all men. He had to be a policeman, lawyer, jailer, magistrate, coroner, sociologist, historian, engineer, meteorologist, mechanic, surveyor, architect, clerk, builder, banker, handyman, anthropologist, cartographer, genealogist, postmaster, auditor, and representative of every government department for his area of jurisdiction. And why? Because in these remote locations there was no one else there to perform these functions.

So, if you could imagine a kiap conducting a court case, you might see him first asking each witness the questions a police prosecutor might ask then, on cross-examination, questions a defence counsel might ask, and then you might hear him summarise the case for both the prosecution and then the defence, and then as a magistrate you might hear him consider both summaries and then he would decide the case. Then, if the decision included a jail sentence, who would take custody of the prisoner? Why the kiap of course because he would be the jailer.

It all sounds chaotic, doesn’t it? But it never was, because although all these duties were performed by the same kiap, the separate functions, in theory, were kept separate. Thus, a prison sentence would be documented by the kiap as magistrate, issuing a Warrant of Commitment to himself as jailer, and that warrant would be the legal authority for the kiap to keep the prisoner in custody in the station jail. So, it often happened that when the kiap was acting in one jurisdiction, he might be required to authorise himself to perform some other function in some other jurisdiction by issuing himself with the correct form.

But, of course, some kiaps considered that authorising themselves to do some other function by way of the correct form was a whole lot of bureaucratic nonsense, since no one would ever stop them from doing their various duties anyway, and the correct piece of paper could often be issued in retrospect if it was ever needed. So, it often happened that the correct form was never used.

However, the city-centric legal profession of pre-independent PNG insisted that the exactitudes of modern civilisation be maintained even in these far-flung reaches of empire. And this happened in the case of ‘The Faithful Committal’.

I was not present at this court case, and it occurred so long ago that retrospection dulls the memory but, from what I remember one lawyer telling me, the story went something like this:

Denys received information that a village woman had been murdered by her husband. Acting swiftly to prevent payback from the wife’s relatives, Denys went to the village and arrested the suspect. Although the wife had already been buried, it was still necessary to obtain the appropriate evidence of cause of death, so Denys ordered the wife’s body to be dug up so he could examine it. Denys then saw that the wife’s skull had been cloven clearly consistent with the blow from an axe, and he found the axe in the suspect’s house, still with vestiges of dried blood and human hair. Denys photographed the wound and ordered the body reburied. With plenty of witnesses, a murder weapon and appropriate photos, it was a clear case of murder. So, back at the station Denys convened a coroner’s court, recorded the witness depositions, remanded the suspect in custody and committed him for trial at the next circuit sittings of the Supreme Court.

But when Denys later gave evidence at the Supreme Court trial, he was subjected to persistent questioning by defence counsel like this:

Counsel: Who was the police officer in charge of the murder investigation?

Counsel: You said you exhumed the body for examination.

Counsel: In what capacity did you exhume the body?

Denys: In the capacity of police officer investigating the case.

Counsel: Who authorised the exhumation of the body?

Council: Did you have an Exhumation Order issued by the Coroner?

[Pause. What could Denys say? If he admitted that he did not have an Exhumation Order it would have meant that he had committed the crime of unlawfully interfering with a corpse. So, he had to say yes.]

Counsel: Well, I have looked through the depositions of the committal proceedings, and I cannot find any exhumation order. Can you tell the court where it is?

Denys: It is in my head.

Counsel: Can you explain that?

Denys: Well, when I was the police officer investigating the crime I asked the Coroner for an exhumation order and I know he issued one.

Counsel: How do you know that?

Denys: Because when I was the police officer I knew what the Coroner had in mind at all times.

Counsel: How could you know that? Who was the Coroner?

Ah yes, Denys. You were the epitome of the colourful kiap and we miss you.