‘And now let’s spin another disc from the Beatle boys’—those were the words I heard from NBC announcer, Cathy Garoa, when I first tuned in my new radio-cassette player in early 1980.

Where I lived in Papua New Guinea, there was no FM radio, no television, no Australian newspapers and the internet was not yet a thing. So how did Papua New Guineans obtain their information? 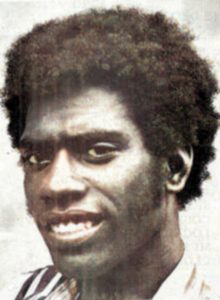 If you lived in the major centres, The Post-Courier newspaper was available most weekdays. But for rural PNG the only source of news and entertainment was the National Broadcasting Commission, through its shortwave and small number of AM services. Overseas shortwave radio was available, but the reception was variable. Listening to the ‘wireless’ in the evening, and especially to dramas on Sunday nights was entertaining and educational for a newly-arrived expat.

One of the funniest episodes occurred during the high school quiz program when host Justin Kili asked, ‘Who is the Queen of Papua New Guinea?’ The student answered, ‘Queen Elizabeth the second.’ I was incredulous when Justin Kili responded, ‘Incorrect. It is Queen Elizabeth Eleven.’

I recall listening to a rugby test between Australia and New Zealand. My car had a shortwave radio and I parked under a mango tree outside a friend’s house and connected a wire from the car’s antenna to the security wire on a window to get a stronger signal. The game was just audible through the static but, with an esky of SP between us, Ashley and I could listen to the match. At the end of the game we asked each other, ‘What was the score?’ The Post-Courier did not include the rugby results on Monday and I had to wait for the fortnightly letter from my father to get the result.

In 1981, Ela Beach RSL installed one of the first satellite dishes and I was able to watch the Bledisloe Rugby Test live. The RSL was packed. The Wallabies scored first early in the match, and I jumped out of my seat to cheer, but quickly sat down when I realised I was surrounded by All Black supporters. As usual the final score was not in Australia’s favour.

The power of the provincial radio service was proven to me over and over again throughout my career. Whenever I had to go bush we would put out a toksave on the local NBC radio station to inform villagers that our team would be arriving on a particular date to hold an awareness meeting or survey food gardens. Without fail the message would had been heard and there was always a warm reception on arrival.

On occasion we would take an NBC officer with us and, with an ancient tape recorder, they would record awareness sessions and interviews. Everyone wanted to speak into the microphone and they would listen eagerly every night to hear themselves on the radio. 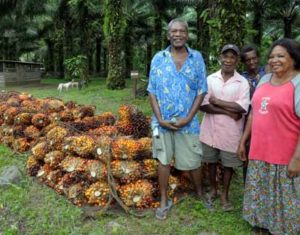 The oil palm extension service at Hoskins had a weekly thirty-minute radio slot which was broadcast on Tuesday nights at 7.30 pm. All the growers in West New Britain would tune in and listen to the information on pick-up schedules and other relevant topics. I was scheduled several times a year to contribute to the program. My usual subject was fertilisers. We developed simple radio plays to convey the message that the nourishment was good for growth of the palms, and if the grower harvested every fortnight the payback from the fertiliser was very good.

We also took NBC announcers to field days and recorded interviews with growers for use in the weekly radio program. When the Lus Frut Mama Scheme was devised in 1996, the radio interviews with women participating in the pilot scheme at Sarakolok were very powerful in disseminating the benefits to women and families.

After one such broadcast, I travelled to Poliamba Oil Palms in New Ireland and attended a smallholder field day. As soon as I said, ‘Moning olgeta’ [Good morning everyone], I heard them say, ‘Ah em Grem King. Mi harim nek bilong em long Redio West long asde nait.’ [Ah, that’s Graham King. I heard him on Radio West last night.] Smallholder oil palm growers in New Ireland were listening in to the oil palm program broadcast from Kimbe as that was their only source of news about oil palm prices and agronomy.

By 1999, the NBC studios in Kimbe were very run down and the original analogue equipment was mostly unserviceable. The technicians tried valiantly to keep it going but, with no funds for replacement and upgrade, the equipment died and so did the station. Similarly, the station in Popondetta was mostly non-functional when I started work there in 2000.

Occasionally, we would get a message that Radio Northern was back in operation, and we would go in to record a program. But the villagers had lost interest and were not tuning in to the station as it was so unreliable.

The government focus was now on television through Kundu TV and the internet had arrived as a means of communication. But outside the major towns, communication is still a major problem.  Although the telecommunications company Digicel claims it covers ninety per cent of the country, the vast majority of the rural population cannot afford the cost of making a phone call, let alone surfing the internet.

I was prompted to write this after reading Keith Jackson’s stories [in PNG Attitude] of the development of the NBC. It was a fantastic achievement. School education broadcasts, news and current affairs and music were broadcast throughout PNG.

Every school had a radio as did most rural households. Village trade stores always had to make sure they had stock of D-size batteries and there was talk of setting up a dry cell battery factory in PNG.

Sadly, successive governments failed to see the importance of a national radio broadcaster and the NBC is no longer able to fulfil its mission. It has a nice Facebook page but people cannot access this without power and reliable, cheap internet.

I cannot understand why the PNG Government has not seen the need to keep the people informed.  Maybe this was deliberate. It seems to me that the majority of rural Papua New Guineans now obtain most of their misinformation from churches. They know more about God’s plan than the government’s plan for development of their communities.