I refer to the article by Peter Comerford on pages 42 – 46 of June 2016 edition of Una Voce – his “Return to Panguna” and what an eye opening article it is for it brought back memories of the time I spent on Bougainville between June 1973 and July 1974.

I was the spare parts manager of Ela Motors based in Toniva at that time and naturally I did many trips delivering spare parts to the mine site workshops every week, so I came to know a lot about the workings of that mine. The photos attached to Peter’s article certainly stunned me and what a disaster for PNG to lose such a huge earner of money for the PNG coffers.

My story is something that nearly cost the life of my wife and I through a failure by the Bougainville Copper Limited (or BCL) to maintain a small section of the road that leads down to the Jaba River. On Sunday morning, 24th March, 1974, my wife and I decided to go for a picnic to the Jaba River situated about ten kilometers on the other side of the mining operations. The main road up to the mining site from Arawa is an engineering masterpiece in itself. During its construction, twenty-five workers lost their lives and dozens more were seriously injured caused by continuous landslides brought on by very wet weather and earth tremors. The mine site itself is 1,200 meters high up in the mountains.

Just prior to this incident I had brought a second-hand Corolla sedan for my wife’s personal use as she was working for a company in Kieta township. On our trip through the mine site to the road that led down to the Jaba River, I noticed a small shallow creek that flowed over the dirt road to the edge where it then plunged about 100 meters or more down to a creek way below. The water across this road (that seeped through a large pile of overburden about 15 meters away), was just a couple of centimetres deep. What concerned me a bit were several large boulders that had been placed over this small running creek some twenty meters up from the road. I also noticed a Caterpillar D7 Dozer with a powerful winch at the back just sitting beside the road near this creek—but no one in the Dozer at all.

Penny and I continued on down to the Jaba River, had a swim beside the causeway then had our morning coffees, time now close to 10 am. I noticed storm clouds building up quite rapidly over the mine site and I said to Penny that we had better start heading home. The reason I said this was that heavy downpours of rain occur very rapidly in the tropics and my mind went to that little creek we crossed over near where those huge boulders were. We packed up our gear, (camera, towels, picnic baskets etc.), and with me driving, headed straight back towards the mine and it was all uphill. The little creek had now widened to around three metres but just over my ankles in depth.

I had walked out to test the creek for depth and for solid ground and found that both were quite adequate for the Corolla to handle. By now the rain was increasing in intensity so we got back in the car, I reversed back from the water’s edge as far as I could go then gunned the engine and took off through the little creek. We got just over it but the back wheels kept spinning on a very soft piece of the road at the creek’s edge near the bulldozer.

By now, this creek was starting to rise rapidly and I tried to open my driver’s side door but by now the water and mud had risen about another ten centimetres or more in just a few seconds and the force of the mud and water was so hard I couldn’t open my door. I also felt our car move a bit and I yelled to Penny to get out of the car as quickly as possible, forget about our clothes (we were still in our swimmers), and get onto the mine side of the road near the bulldozer. As soon as Penny got out I clambered over to her side and joined Penny near the bulldozer. Just then a family from the mining company arrived down in their station wagon and saw our predicament. They too were heading down to the Jaba River. The father of this family asked me, “ Where is the driver of the bulldozer?”. I said I didn’t know and asked was the bulldozer there for. He told me that the mine had had similar situations like this before with their own vehicles getting stuck on the same spot so they put the bulldozer there (which had a powerful winch on the back) to pull the mine trucks out whenever they got stuck and there was supposed to be a driver with the bulldozer all the time. There were no signs up anywhere indicating that the crossing could be a hazard.

The fellow from the mining site turned his vehicle around, took Penny with him and his family to find the driver of the dozer because he would have had the ignition key to start the dozer. I stayed behind to keep an eye on our car. In the meantime, the rain had intensified and the creek across the road was now becoming a swollen rapid stream with bits of debris, stones and branches from trees racing through and dropping over the edge to another creek about a hundred meters below. Amazingly I saw our car being lifted up by the swelling stream and pushed to the Jaba side from where we had come. Soon after the fellow in the station wagon arrived back with the driver of the bulldozer; he had decided to go for a bit of a ‘walkabout’. 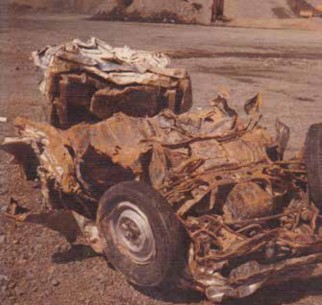 What remained of our Corolla sedan.

The fast- flowing mud and water was now just up to our knees and we were less than a meter away to hook the winch cable to our car when suddenly I felt the ground beneath my feet starting to shake violently. I looked up to where the huge boulders were and they were starting to move. Each boulder was about the size of a small bus. More frightening was the huge pile of debris that had piled up behind those boulders so rapidly and the Photo. What remained of our Corolla sedan. weight of this debris was starting to push those boulders forward.

We had barely made it when one of the huge boulders just up from where my Corolla was stuck gave way and thousands of tons of mud, water and debris came shooting down at a rapid speed. From the time we first got stuck as we tried to get across the stream to the time our car was hurled over the edge by the tree was less than five minutes.

All Penny and I had on in this cold pouring rain were our swimmers as all our clothes, towels, camera etc had gone over the edge with the car. The expat fellow who drove the dozer took us both back to his house (with his family) which was up in the mine area gave us some hot soup, loaned us some old clothes, and then drove us the 56km back to our house in Toniva. He told me that I have every right to claim for losses against BCL because the driver of the bulldozer should have been with the dozer all the time and he would have been able to pull our car out the moment we first got stuck.

The case for compensation

The solicitors in Port Moresby wrote to Bougainville Copper Ltd (BCL) the 10th April 1974 on our behalf claiming damages $1,200 for the loss of our car and personal possessions. BCL replied on 26th April saying, “ Information to hand indicates that Bougainville Copper Limited had a bulldozer on standby at this section of the road and the claimant refused a tow because his vehicle did not have a tow bar. Under these circumstances we do not consider ourselves liable for the ensuing loss. We also draw your attention to Clause 14 (d) of the mining (Bougainville Copper Agreement) Ordinance 1967 which would appear conclusive in this case”.

Bougainville Copper Ltd finally paid up in August 1974 and by now we were living in Wewak. There was a Clause we had to sign to receive the payment and that was that we were not to make any public statements for five years about the incident. Those five years ended in 1979.

In late 1989 an armed rebellion by disgruntled landowners lead by Francis Ona eventually caused the mining operations to close down completely. The mine remains closed to this day.