… I’ve seen Santa. He has fuzzy brown hair, brown skin, a laplap around his waist and bare feet; and there was not one scrap of red winter apparel with white trim on him at all …

As a young man, I was extremely fortunate to work in Papua New Guinea with the Department of Agriculture Stock and Fisheries (DASF).

The night was moonlit, the air heavy with the scent of the tropics. It was very quiet. I didn’t carry a lamp or torch, as the blue-white light of the moon was enough for me to see the road. I had seen the lights of New Guinea settlers in their officially allocated sawn-timber houses, along with the occasional murmur of families as they prepared for the night. They were probably as confused as I was, as they had only recently come from many parts of PNG as settlers to the oil palm scheme in West New Britain. They were the pioneers of the scheme, the first of many. 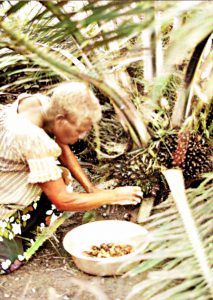 I suddenly became aware of a fellow traveller coming my way. This man held a torch, which he used to light the road. The pain of homesickness left me with no desire for company, so I stepped into the dark shadows of some bushes. When the traveller came closer I could see he was carrying a bag over his shoulder, and as he came adjacent to me he suddenly gave a gasp and shone his touch onto my white legs. Being found out, I stepped out onto the road and identified myself. I recognised the man as a settler who lived close by and called his name. He recognised me and did the same.

We talked for a while and he told me he had been to the Chinese store at Hoskins some twenty miles away and purchased some little gifts for his children. These he had in the bag over his shoulder.

He had been able to get a ride on a PMV to Nahavio but, unable to obtain transport home from there, had walked the last few miles. We talked for a few minutes and then parted company, each to our own Christmas.

As I walked home I realised I had seen Santa, and it lifted my spirits. He had fuzzy brown hair, brown skin, a laplap around his waist and bare feet; and there was not one scrap of red winter apparel and white trim, in contrast to the traditional Santa; however, this Santa had a real sack of presents over his shoulder. It was a timely reminder that, irrespective of our culture, we all love our families and this man’s sack of gifts for his children reflected the true meaning of giving at Christmas—the fine humanity and dignity of the Christmas tradition.

Some days later I met this man again and he explained that when he had seen my white legs he had got a real fright as he had thought he had seen a ghost.

He said, ‘Mi lukim lek belong wanpela masalai, em masalai belong dis nupela ples; Tasol em yu iet Peta; na em i orait.’ (I’ve seen the leg of a ghost, the ghost of this new place but it’s only you, Peter; and that’s OK.) At least this man had given me the credibility of ‘orait’.

Christmas Day 1968 saw me arriving in my old Land Rover (my vehicle allocation) at the Pattersons’ place at Nahavio with a few beers, a bottle of Tia Maria and some sort of contribution to the dinner. I was looking forward to some Aussie companionship. The party had already started and I was a few drinks behind.

As I settled down with a pre-dinner drink, there was a knock at the door and a New Guinea man said ‘Meri belong me i gat bel na em i bagarap pinis, na emi mus go long haus sik’. (My wife is pregnant and she is not well, she must go to the hospital.)

To put things into context— in 1968 the oil palm scheme in West New Britain was very isolated. 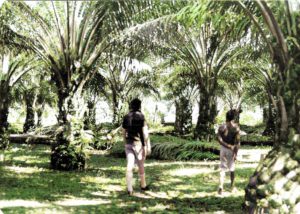 It was obvious that since I had the only means

of transport and was sober I was to take this lady in distress to hospital. So, I leapt into the trusty Land Rover and set out with the husband of the sick lady showing me the way. On arrival at the settlement block there were a number of people waiting, and they quickly loaded the patient into the Land Rover. We set out with a number of concerned relatives, who proved to be very useful.

First thing to contend with was a fast-flowing flooded causeway. The extra weight kept the Land Rover on the road and not floating down the creek. Another flooded creek looked very deep, but a laplap draped over the radiator and held by someone sitting on the bonnet of the Land Rover, kept us going as the water was pushed away from the motor.

Finally, we arrived at the hospital and delivered the patient to the sister who appeared slightly annoyed that her Christmas Day was being interrupted—but the patient was at the right place and being looked after.

The home trip was uneventful and I returned to Nahavio hoping for a Christmas dinner. There was a little food left and everyone else was at the merry stage of Christmas which, as I was sober, was a little isolating.

As I drank the warm, flat beer that had been kept for me, I thought that it had been the longest Christmas dinner I had ever had; however, ‘Santa’ with his sack of toys, and helping a mother and unborn baby on Christmas Day had made this Christmas memorable.