My first memories of going down the Boluminski Highway were the animals — village pigs, chickens, dogs. The birds took off sometimes nearly hitting my elbow as it hung out the window. 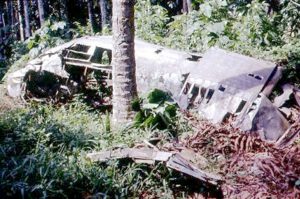 B17 fuselage at Kalom Plantation,1969

Passing Utu High School, at Panapai, if you looked across to the ocean there were three half-submerged Japanese tanks deliberately driven there to prevent the Allies getting them. By 2011 they had become part of the reef. Local kids knew nothing about those tanks.

At Lemakot I observed coral-built fences with head posts on each side of the village displaying the carved head with a cap denoting a German captain (kiap?) from the previous colonial administration. Fangalawa was to be the road junction to the planned road to the west coast. Further on, at Lemakot Mission with its high-steepled church, was a garden with war relics.

We had a grader to service at Lakuramau Plantation, now called Poliamba with its oil palm factory. We pulled in there, took the Allis Chalmers grader onto the beach under the coconuts and started servicing. No environmental considerations then! We let the oil soak into sand. When lunch time came, I stripped to my underdaks and joined two or three mechanics in the soda water. I always had Francis and Linus with me.

Further down at Konos there was a Public Works Department (PWD) depot. There was a large shed and we could do our servicing under cover out of the coastal rain. There we towed, from Bolegila Plantation, an Austin tipper truck with a blown head gasket.

At Bolegila there were a few WWII Japanese trucks used by the Stanfield family (former coastwatchers) scattered among the coconuts. I scavenged for odd nuts and bolts. It was near here, while about to cross a river, a huge family pig jumped out and hit the Land Rover. I bowled it over and it fell into the creek. The village women cried out, ‘Em i kilim pik’. The mechanics in the cab said keep going. The pig would be eaten that day anyway. Bolegila, built by Old Man Stanfield, was a marvellous place constructed mainly in concrete. The house had tile floors and was built on a cliff overlooking the sea. It was later purchased by NBPOL (New Britain Palm Oil Limited).

There were a number of other PWD depots along the road. When we got the International we could do a fair bit of work under cover.

After a front wheel bearing repair to a Ford tractor at Belik Plantation, while going into Namatanai a prisoner with grey laplap marked with black arrows suddenly appeared from behind a hedge. He was heading back to work with equipment on the other side of the road after he got a drink of water at the tank behind the District Office. I skidded to a stop but, sadly, ran into him. ‘No wori tingkim’ from one of the mechanics. We gingerly loaded him onto the tray and delivered him straight to the hospital. He had leg injuries but was otherwise OK. No thought of payback in those days.

At Namatanai we were 263 km from Kavieng and I stayed at Tong’s, an old shutter-windowed guest house, sometimes for up to a week. This was a chance to meet other admin people and we swapped a lot of stories. We could get SP beer there, too. The local workers had separate accommodation and meals paid for out of a government voucher book. We used this as a base from which to support the road construction group on its big push to Uluputur and then join up the tracks up the west coast to finish on the east coast at Fangalawa.

While I was staying at Tong’s and conducting repairs to an Allis Chalmers front-end loader at Kalom Plantation, an old man onlooker told of a B17 bomber in a nearby coconut grove. He led us to the site where we found the aircraft in three pieces. With tears in his eyes he said, ‘We couldn’t do much with the wounded crew, they all died and we buried them near the plane.’ As a young boy he witnessed the aircraft hit by Japanese anti-aircraft fire, losing height and coming down among the trees. He was shocked to see so many young men in the crew. American officials came through and repatriated the remains. I took photos showing how well preserved the aircraft was.

The koronis highway was normally a village responsibility and the villagers were paid for filling pot holes and clearing away debris. PWD graded and rolled the road regularly. The graders and other machines then came from Great Britain via Burns Philp ships such as the MV Rosebank. 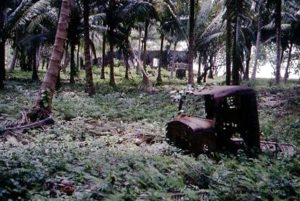 It was a strange job, invariably carried out at night, after general cargo had been discharged and copra and other produce loaded. This involved welcome overtime for me and the other staff. Lesser weighted machinery was carried as deck cargo. Heavier equipment was stowed in the hold mounted on wooden cradles with wheels strapped to the sides. Graders were lifted by the ship’s derricks and suspended over the wharf. We unstrapped the wheels and took the wheel nuts from their tar-paper wrapping, careful not to lose them between the wharf timbers.

Occasionally, in these nights of tension and excitement, an assisting local mechanic accidentally kicked a few nuts into the water below: ‘Sori tumas masta.’ When this occurred I raced back to the depot to get some replacements, borrowed from an existing grader. Then the machine would be started and driven off to the depot. Those BP ships, their skippers and crews provided a welcome and efficient service.

It was mid-May 1969 that the District Works Officer, Allan Bell, announced a re-sheeting and grading program for the highway and also the construction of a road from Namatanai to Uluputur, and up the west coast linking up the plantation tracks and also to connect with Fangalawa on the east coast. I had a big job from early June that year when the PWD road construction group began the upgrade. With my staff we had to keep the following fleet of equipment serviceable: seven diesel road graders, three dozers with angle tilt blades and rear rippers, three front-end loaders, eighteen tipper trucks, three drawn vibrating road rollers, one Conquip articulated tractor crane, fourteen diesel, wheeled tractors with tipping trailers and one tractor-drawn self-loading scraper.

When I returned in 2011 the Boluminski had been sealed, but had deteriorated in lots of places due to lack of maintenance. Somehow, money dedicated to this project appeared to evaporate. Koronis surfaces are easy to maintain by using a grader. Pot holes in bitumen are a real problem if not attended to promptly. u

The Boluminski Highway was named after Franz Boluminski, a district officer in the German New Guinea service 1910–14.