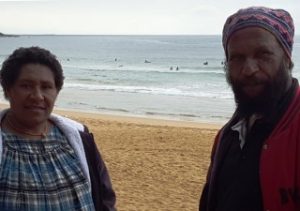 Julie, never before seen the ocean, and Daniel

DANIEL:  I HAVE been listening to my wife, Julie’s, daily prayers to God in the Enga language in the privacy of our hotel rooms in Noosa, Brisbane, Sydney and Cairns over the action-packed two weeks we were in Australia.

All this was made possible by the inaugural McKinnon-Paga Hill Development Company fellowship scheme, PNG Attitude and many other friends of Papua New Guinea.

One morning in Brisbane, I heard Julie plead with God to make Keith Jackson’s spinal operation successful and when we heard in Sydney that it had indeed gone well and that Keith was ready to go back to Noosa, Julie was elated and thanked God again that night.

“I ask you, oh Lord, to please bless him and keep him strong with good health as well as all the other lovely silver-haired men and women so they can live longer and continue to help more writers from PNG.

“I thank you Lord Jesus for making it possible for me to come here to this beautiful country. Amen.”

I thought that was thought-provoking and I decided to interview her on Saturday before we departed for Wabag in the highlands yesterday.

I talked to Julie in our room at the Bellview Motel on The Esplanade in Cairns. I knew she would find the words to relate her experiences here in Australia but was surprised at how she poured out her thoughts without any hesitation, like a spring.

What follows is the word for word transcript:

JULIE: BEFORE leaving my highlands home at Wabag in Papua New Guinea’s Enga Province just over two weeks ago, I was wondering what kind of place I was going to.

Having seen some action movies about Australia in PNG, I thought I would see violence and rough people on the streets, especially in cities like Brisbane and Sydney.

But there was none of it. I think action movies are an illusion that gives a bad image of peace-loving Australians.

As soon as I landed at Brisbane International Airport, I saw that Australia was beautiful. I also saw that the people were humble and kind. The coach driver was very helpful. He handled our bags with care and spoke to us with kind words.

A lady in Noosa offered to take my photo in front of the Noosa Blue Resort where we stayed. She told me her dad had fought in New Guinea during the war and that she was happy to meet me.

I was made to feel welcome on the Qantas flight to Sydney when one of the cabin crew brought me three bottles of water and spoke to me in Pidgin English, saying he had grown up in Rabaul.

I have seen clean streets, beautiful parks and even saw a lady walking her dog in a public place in Noosa and picking up its excrement using a plastic bag and dumping it in a rubbish bin provided by the local council. 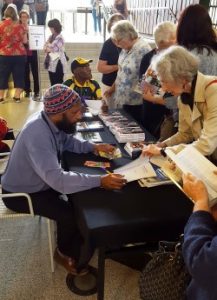 Daniel signs his book at the Brisbane Writers Festival

Australians know how to enjoy life. They create heaven on earth and I think many of them will go to heaven. They are so kind, happy and willing to help each other.

I think they live less stressful lives and that’s why they live longer. I could not believe that Professor Ken McKinnon, our Sydney host, was 85. I am sure he and his lovely wife, Sue, will live to be 100 and I told him so in his apartment where we had dinner with two other guests.

He took us to his secret place, a small beach where he swims every morning and has been doing this for many years. I wish buai chewing, cigarette smoking, boozing Papua New Guineans would follow his example and learn to live quality lives. I think lifestyle diseases are destroying many of our people in PNG.

I went into many Australian homes, ate with them and shared jokes with those who could speak Pidgin. I sensed that I was accepted as I was – an illiterate woman from a remote province up in the highlands of PNG who was on her first trip overseas.

If I struggled with my fork and knife and ate with my hands, they didn’t seem to mind or notice. These gestures comforted me. I mixed with them as if I had known them before.

Something I noticed in the shops, train stations, hotels and public transport systems is that everywhere there are people ready to help.

I went shopping on my own in Brisbane and Sydney and, when people realised I was new to the place and gave only one word answers, they simplified everything for me. I was able to understand much better and felt at ease.

The streets are designed with everybody in mind – the mother with a baby in a pram, the old men, a person in a wheelchair. That’s why we were able to take our wheelchair writer Francis Nii to many interesting locations in Brisbane.

I wish our towns and cities in PNG could be designed in such a manner so people can enjoy themselves. Francis Nii was even booked into hotel rooms, like at Noosa Blue, especially designed for wheelchair guests.

I will take many memories with me back to PNG but the one that stands out is me standing beside my husband to give presents at the Jackson’s home in Treasure Cove to Hon Glen Elmes MP, Noosa Mayor Cr Tony Wellington, Deputy Mayor Cr Frank Wilkie, Cr Ingrid Jackson and many Australian friends including the youngest of all, three year-old Leilani.

And finally, I thank Paga Hill Development Company, Keith Jackson and Professor Ken McKinnon, Ben Jackson and organisers of the Brisbane Writers Festival for treating me as an equal to the PNG writers – Francis Nii, Martyn Namorong, Rashmii Bell and my husband Daniel Kumbon.  I received the same treatment and I thank you all for your generosity and foresight. 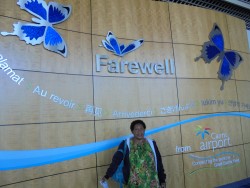 I am a mother of five children and what I will do now is to encourage my children to read and write more.

I know the problems my children’s schools face – no libraries, no books, no properly trained English teachers and so on but, despite the odds, it is my duty as a parent to encourage them to read and write more.

And maybe one day they can follow in the footsteps of their illiterate mother to Australia.