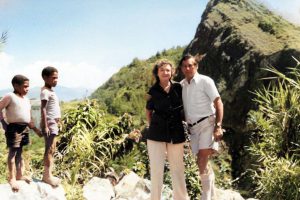 On a cold Taree evening, my grandmother, Margaret (Maggie) and my grandfather, Edward (Ted), sat huddled in the draughty log cabin he had built on his soldier’s parcel of land given to him after WWI. Maggie was pregnant, and it was becoming evident that this baby, due sometime in August, was not going to wait. Faced with no other option but to lock the two small boys (Patrick was only three and Jim, two) in the cold log cabin alone, and having no car or horse or dray, Margaret and Ted set out to walk the two miles to the main road to try to get help. The river was swollen with the recent rain, and impassable, so there, on the riverbank, on a freezing cold evening of 18 July 1923, my mother was born. That is where Ann Patricia (Pat) Guest’s story starts and it set a precedent through her life, always being in a hurry.

To keep this short, I’ll fast forward to when Mum met my father, Bill Guest, who had fought in New Guinea with the famous 39th Battalion. After the war, Dad rejoined the army and was posted to Port Moresby in the Papuan Infantry Battalion, and so started his love affair with this wonderful country and its beautiful people. Briefly posted to South Australia, he met Mum, the fairy tale of love at first sight. Three weeks later, they married in a simple ceremony because, as Dad termed it, he needed Mum on his meal ticket!

On 1 April 1958, I arrived and Dad was posted back to Lae in the Papua New Guinea Volunteer Rifles (PNGVR), and in 1959 Mum and I joined him there. Dad had to go out on many patrols with the army and on one patrol, worried about leaving his young family alone, he gave Mum a pistol. She already knew how to shoot from army training. Dad thought he would send someone to check that we were okay; the doorknob turned, and Mum grabbed the gun and shot through the door. Hurried footsteps away heralded the visitor’s departure. He reported to Dad that his wife didn’t need to be protected as she had damn near killed him!

Dad left the army and we had a quick stint in Adelaide; however, the call of New Guinea was too strong and, six months later, Dad accepted a job in Lae with Carpenters and we went back. Mum worked for an insurance company and our life in Lae was idyllic; so many stories, though one does come to mind.

There were no sewage systems back then and the outback dunny sufficed. Social life was abundant and at one of the many parties, attended by a lot of expats, with free-flowing beverages, but only one outback dunny, used by the ladies while the men used the surrounds. It was the wet season and the ground was saturated. Mum decided to visit the outhouse before they left to go home. As she sat there, she felt the earth move and very slowly the pan sank into the wet ground. Grabbing hold of the handle she screamed out for help and, eventually, she was rescued. It was one of her stories that always gave me a chuckle, her hanging on for dear life as the pan disappeared beneath her.

Dad was offered the manager’s job with New Guinea Company in Goroka and, when I was seven, we moved there. Scott arrived and our family was then four. The trade store was dilapidated and run down but over thirteen years Dad built the store up to be a thriving business. Mum ran and built up the drapery section, eventually, buying for all the Carpenters stores in New Guinea. Dad managed the store but Mum managed all of it and him.

Bowls was their love and they spent every weekend at the Goroka Bowls Club. Mum represented PNG in the championships in Port Moresby and was the first woman to compete with the men in the men’s fours. Testament to her skills, we packed away many trophies.

After Independence and jobs were being localised, in 1979, after twenty-one years in PNG for us and almost thirty years for Dad, Mum and Dad decided that it was time we went finish to Australia. Such was the love the local people had for Mum and Dad, the day of our leaving will be forever etched in my mind. The locals lined the street from the store to the airport, the meris howling and wailing, throwing themselves around Mum’s legs, begging her not to go. One of our store bois was a bagpiper in the PNGVR, and he piped us onto the tarmac—how we got on that plane, I’ll never know. We came finish to Kippering, the house Mum and Dad had bought in preparation. Dad painted it light blue and dark blue, for his beloved Sturt AFL team, and called it ‘The Zokozoi’ after the infamous boi bar in Goroka.

After Dad died in 2006, with that same strength and fortitude she was known for, Mum joined War Widows, Legacy and Ex-servicewomen; she played bingo every Sunday and mahjong every week; she enrolled herself in a computer course and learnt how to navigate a computer and send emails and, at ninety-three, took on the position of Secretary of Ex-servicewomen.

Mum never took any medications, believing 1000 mg of Vitamin C and aloe vera could fix anything. At eighty-six she had a stroke and a lengthy stay in hospital. She was determined to get over it and she did but, at ninety-two, she had a fall and cracked three ribs and a vertebra in her back. Again, showing her defiant, stubborn and fighting spirit, she was determined to walk again and she did

Mum gave up her licence at ninety-six, not because she felt she couldn’t drive, but she had trouble getting in and out of the car. A series of falls rocked her confidence and then COVID-19 confined her to the house. After the last few falls, Mum was diagnosed with congestive heart failure and, eventually, she ended up in hospital.

The realisation that she would have to go into aged care was just too much for her. We moved her into Seabrae Manor at Rothwell, and I will be forever grateful for the care and compassion they showed my mother, who was not the easiest person to deal with. Going into aged care was, in her words, God’s waiting room.

One of the things Mum had was her strong Catholic faith and her love of the rosary, which she said every day of her life, right up until the end.

Mum was not doing well and after her ninety-seventh birthday we managed, despite the COVID-19 restrictions, to get the whole family including the great-grandkids and her grandson, Tim, who is in the navy, back from Darwin, to celebrate it with her. It was evident that her incredible story was coming to a close. She passed into God’s care on 5 September 2020.

Pat, Mum, Granma and GG was a great storyteller and her stories will live on in her grandchildren, her great grandchildren and, hopefully, their grandkids because, like a good book, it never ends.