English missionary, Rev. Charles William Abel (1862–1930), began work at Port Moresby in 1890 and in 1891 he joined Rev. FW Walker on the mission station at the island of Kwato, about 3 km west of Samarai Island in Milne Bay. Mainly because of hard physical labour by the two men, Kwato was reasonably habitable by 1892 and some buildings had been erected, including the stone non-denominational church. 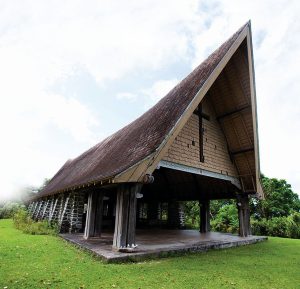 After Rev. Walker resigned, Charles Abel and his new wife, Beatrice, worked hard to make Kwato a model mission station. A boarding school was established to train Papuans in manual skills such as Western-style carpentry for house and boat construction and furniture making. In 1911 he established coconut plantations for the production of copra.

These activities were opposed by the London Missionary Society (LMS) who believed Abel was pursuing practical education at the expense of religious studies. In 1916, when the LMS withdrew financial support, Abel resigned, and established the Kwato Extension Association, which trained teachers and evangelists and promoted sport.

It also ran plantations in the Milne Bay area, a dairy farm and a boat-building enterprise, whose boats were used to transport and supply the Australian Coastwatchers during WWII.