This story is about Patrol Post X in Papua New Guinea and how, in the mid-1950s, the Patrol Officer (PO) of the Department of Native Affairs had to manipulate the law, public monies, government stores, specialist workforces, his authority and the truth to achieve development. The successful ‘operator’ had to know how to work within, and outside, the formal structure of the bureaucratic organisation. He depended very much on his personal relations with individuals for survival as many a PO had gone to the courts, been dismissed or sent away to more forbidding places for making errors in human relations.

An officer of the Department of Native Affairs had to be a generalist and, on this patrol post, his duties included being in charge of police and prisons; he was also a magistrate and arbitrator and cared for the agencies of Treasury, Posts and Telegraphs, Public Works, Health, Education and Civil Aviation. One of his most important jobs was the exploration of the hinterland and the consolidation of central government influence.

In this case study the PO wanted to get teachers and an education complex established on Patrol Post X, a station rated very low for central government priorities, especially with regard to education, as first contact was still being made with the local people. 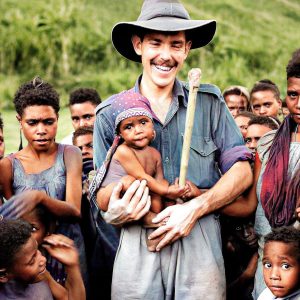 The PO wrote a letter to the District Officer (DO) explaining the need for a school at Patrol Post X. The DO minuted it on to the District Commissioner (DC) and the DC wrote another letter to the District Education Officer (DEO). The DC and DEO met each other at golf but there were many things to discuss other than a school at Patrol Post X. Eventually, a letter came back from the DEO, through the DC and the DO, saying that no money was available to build a school and that the few teachers available were already posted for the following year. The DEO indicated that three teachers might be available in 18 months.

The PO knew the DEO personally and contacted him directly on the radio telephone and informed him that the station staff and surrounding villages were so anxious to have a school that hundreds of volunteer labour had come into the station and had already partly completed the school. The DEO had just come back from a short course at the London School of Economics, and this sounded romantically like lectures he had attended on a new method called community development. The DEO was interested and promised a tour of inspection after the Christmas vacation and, if all was in order, could possibly direct three teachers to this project.

There was no school at Patrol Post X; nor had the people thought of one because they did not know what a school was. The PO sat down to plan the project and the first thing was to study the availability of money and manpower. His funds were as follows:

Out of these funds he very quickly calculated he could misappropriate £1500 for the new school project. The prisoners had planted acres of gardens and the station was self-supporting in the supply of fresh vegetables. They had already excavated the airstrip while the PO was on patrol. It was only a matter of the PO making out cash contingencies with fictitious names.

In the absence of two other literate officers all he had to do was sign them three times in the capacity of authorising officer, paying officer and certifying officer. The PO had to be especially careful about this because Treasury had returned contingencies in the past because one signature was lacking. 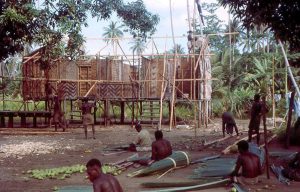 The PO then had a meeting with administration employees on the patrol post, including the police, to study manpower requirements. The expert in this field was the Sergeant Major of police, a holder of several war medals and 30 years’ experience in self-reliance, self-help and community development. He had taught the PO how to be a magistrate and arbitrator as well as how to avoid being speared in uncontacted and uncontrolled areas.

The Sergeant Major drew attention to a recent clash between two nearby village groups. Consequently, 125 men were to appear before the PO next day charged with riotous behaviour. Most of the able-bodied men about villages were involved in the clash and, apart from the gaol being full, the PO had considered there were the social and human aspects of having them away from their families for three weeks in the particular season when subsistence was extremely difficult.

The next day the villagers resolved that 250 people among them would assist in the project for half a day, each day, for four weeks. Each would receive one meal a day. This arrangement would be in place of 125 men going to gaol for three weeks with three meals daily and accommodation provided. The PO duly submitted court returns to substantiate a false requirement for stores of meat, fish, salt, flour, hard peas, rice, soap and tea. It established a tremendous amount of goodwill to give a hot mid-morning meal to any volunteers who came to assist the school project. Additional calico ordered for the prisoners who never went to gaol would be the first two changes of dress the children would receive on their first day of enrolment.

Within several days the manpower requirements were adequate and 300 adults were well supervised and hard at work. Among them were 80 prisoners who went off without police escort in their own supervised teams to collect bush materials from station land. Management was a small problem and so some long-term trusties, who knew from past experience what bush materials were required, were allocated as supervisors of village groups.

The police were appointed as construction supervisors under the able management of the Sergeant Major. They marked out and had levelled the sites for three married quarters, three classrooms and a sports field. 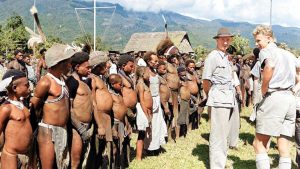 Holloway with a UN Trusteeship Mission in 1956

The pilot-owner of the Dragon Rapide that flew into Patrol Post X was briefed on the scheme. His silence was assured because he also became the agent to purchase materials such as louvres, fly wire, nails, screws, three-ply, hinges, stoves etc from the coast. Several extra charters were paid for in cash out of money made from the sale of sweet potato. He also had the task of delaying the DEO’s tour of inspection by one week and to ensure that space on his plane was not available for a surprise visit by the DC, DO or auditor.

After the first week the project really started to take shape with evidence of structures going up, a new flagpole and a stone-lined pathway. All this drew the curiosity of nearby villagers, and they helped in providing materials for thatching the roof, which were unavailable on the government station.

In the fourth week the outside work had been completed and work started finishing the interior of the houses and making school desks. Children, girls and boys from the government station and villages nearby and faraway, 120 of them, were listed by the PO in anticipation of their enrolment. Dormitories and gardens were commenced, and orientation classes were started in the middle of the fifth week. A medical orderly, a corporal, the office clerk and the Sergeant Major’s wife were class leaders. The Sergeant Major taught the children to march and to sing ‘God Save the Queen’. He took great pride in this because, only several years earlier, he had been to the Queen’s coronation.

Finally, in the sixth week the DEO came on his tour to see the school buildings. He was impressed, not only by the school buildings but also by the massive cultivations around them, the flag flying in the breeze and 120 children, dressed in unbleached calico, singing ‘God Save the Queen’.

In speeches, it was related to him how the people had desperately wanted a school and that they had gathered their meagre resources together to build it. They knew his name and feasted him well. He made a case study of their achievements and, although based on false information, it seemed to fit in perfectly with techniques he had learned at the London School of Economics. He wrote glowing reports to headquarters, and within another two weeks, three teachers were posted to Patrol Post X. The PO had achieved his objective.

Biographical Note: Sir Barry Blyth Holloway KBE; born 26 September 1934; died 16 January 2013. He went to PNG as a Cadet Patrol Officer in 1953 and, after time as a kiap, settled in Kainantu where he was a foundation member of the Bully Beef Club, and was a strong advocate for independence in the lead up to the 1968 elections. He was Speaker in the House of Assembly from June 1972 to September 1975 and then continued as Speaker in the National Parliament until August 1977 after which he was Minister for Finance until 1982. He served on many committees and continued in various roles for the governments of Sir Michael Somare and other prime ministers.