The story by Adam Liu, ‘The Search for Nicolasa’, in the December issue of PNG Kundu had more relevance to me because of the Saipan connection than the Rabaul connection.

I did my Peace Corps training in Saipan, the capital of the Commonwealth of North Mariana Islands (CNMI), a territory of the United States at that time, and have visited Garapan, although it was a pretty nondescript village back then. I spent seven years living/working in the Caroline Islands and regularly visited Saipan.

The Chamorro people are the indigenous people of the Mariana Islands, but because of Spanish colonisation centuries ago, they all have names like Santos, Camacho, Cruz, etc. and their language now has a lot of Spanish-sounding words in it.

A long time ago many people from the Caroline Islands were introduced into the Saipan population. These were people from islands now in the Yap and Chuuk states which had been devastated by a typhoon. The Chamorro and Carolinians are two different ethnic groups now living on Saipan. I am not sure if Adam Liu made that distinction.

I forwarded the article to a good friend of mine who married a woman from Satawal, an outer island in Yap state, and who is now living in Hawaii doing consulting work in fisheries throughout the Pacific for the last thirty years. His wife still has lots of relatives living in the Carolinian community in Saipan. The following is his response:

Thanks for forwarding the story. It is incredibly interesting. If it has not already, it should go somewhere in an academic journal to be available for posterity. I subscribe to the Journal of Pacific History, and I think that would be an appropriate one for submission.

Nicolasa’s father was from the Celebes and ended up on Saipan. Not that surprising given the trading that took place during the late 19th century. I think most of the names mentioned are Chamorro, not Carolinian. So how did Nicolasa get from Saipan to Rabaul? Well, Rabaul was the headquarters of German New Guinea. 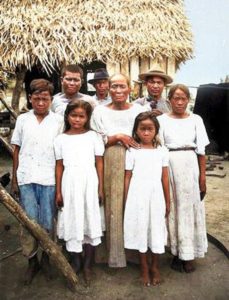 The Germans at the time controlled the Mariana, Caroline, and Marshall Islands. German ships that conducted government business were based in Qingdao, China that the Germans controlled. Considering the geography, it is likely that shipping routes between Qingdao and Rabaul stopped over in Saipan (controlled by Germany from 1899 to 1914).

If you want to pursue this further, you might want to contact Dr Dirk Spenneman, who is at Charles Sturt University. He has done extensive research on Micronesian history and culture. I just had a look at his personal website and he wrote an article, Spennemann, Dirk HR (2009), ‘Ships and Shipping in the German Mariana Islands 1899–1914’. Report prepared for the CNMI Historic Preservation Office, Albury, NSW.

I also wrote to Fran Hezel, an historian with the Catholic church, who is actually now living in Guam. His response:

It sounds as though the author of the article you forwarded did his homework well. He seems to have strung together nearly the full story of the Saipanese woman, Nicolasa, who married a few times and saw much of the world before her death in her nineties. I just have a little background to add.

Saipan was resettled by Carolinians in the late 1800s, but the Spanish made sure to send some of the Chamorros from southern Guam up to Saipan after them to ‘civilise’ them, i.e. make sure they wore proper clothes and learned to make the sign of the Cross. It sounds as though Nicolasa was one from one of those latter families.

When the Germans took over Saipan in 1900, they established a link with other places around the Pacific—Rabaul and Angaur for mining as well as in Nauru. They were buzzing around the Pacific in their ships until 1914, when they lost their possessions, so it wouldn’t have been hard for Nicolasa to meet Germans of all types during that period. She wouldn’t have had any big problem in moving from place to place either.