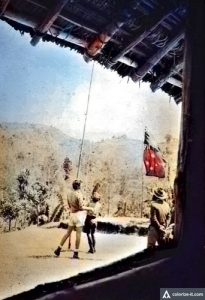 Papua New Guinea’s first government had a well-established provincial, administrative and village contact structure on independence. At the core of the successful kiap system was a central bureaucracy that had direct contact with villagers throughout PNG—no matter how remote the location.
IT WAS CHANNELLED through an estimated 2,000 official rest houses where local communities and government representatives regularly met. These assembly points were most commonly used for routine visits or, in more outlying areas, formal patrols, to update census records, monitor community health, assess village mood or pass on new government directives.
Kiaps were the dominant symbol of Australian administration and PNG’s post-independence politicians would, not unnaturally, have been keen to distance themselves.
But this came at a price. Whatever anyone might have thought about kiaps themselves, they functioned within a structure that had polished its capacity to deliver government messages, and at the same time return useful messages, or observations on shifts in village circumstances or attitude, back to government.
A good example is that the new PNG flag was shown at every village assembly point over 1972–73—well ahead of Independence Day itself in 1975. Few, if any, Papua New Guineans would not have been aware of it, which meant an overnight, possibly destabilising, jolt to national perceptions was avoided.
Showing the new flag was not straightforward. Village resistance to Independence could be fierce and there were occasions when kiaps had to summon all their skills to make sure the new national emblem could fly unchallenged and unmolested.
Now, forty-four years later, it is clear that abandonment of the regular and blanket government-village and village-government communications exchange that was central to the kiap system has triggered unforeseen consequences.
The absence of regular and direct government-village-government contact means that all too often Port Moresby’s response to rural problems is to ignore them—assuming it is aware of them in the first place. Or, in the case of village unrest, or direct challenges to central authority, descend on the trouble spot with overwhelming force, then almost immediately retreat, leaving a confused and unguided community to its own devices.
This being the case it is no surprise a number of no-go areas have emerged. One of which is the Kunimeipa section of the Goilala sub-province, which is hardly eighty miles from Port Moresby itself.
Another result is that disintegration of government-village contact continues and, unless a similarly effective rural administration system is re-established, further decline in contact between villagers and central government is an inevitable, unfortunate, and avoidable, result.