I hope that everybody is surviving the winter despite the cold and wet weather that those of us in southern parts of Australia have been experiencing. The good news is that by the time you are reading this, spring should be underway.

80th Anniversary of the Sinking of Montevideo Maru

The memorial ceremony, held in Canberra, commenced with a service in the grounds of the Australian War Memorial. Unfortunately, the Canberra weather did not cooperate and those who attended listened to some moving speeches from the comfort of their umbrellas and wet chairs. Later that evening around 120 people attended the memorial dinner at Rydges Hotel.

Both were moving ceremonies and brought home to me the fact that the link between the PNGAA and the Rabaul & Montevideo Maru Group does enhance and build on the aims and objectives of the PNGAA by providing another significant historical episode to the story of Papua New Guinea and, by drawing in to our PNGAA story another significant part of PNG history.

The Montevideo Maru Memorial Service and Dinner (see pages 59–62) were attended by a good number of PNGAA members and also caused me to reflect on what can happen when members support the activities of the PNGAA. We are a much stronger organisation when we work together and contribute what we can to the success of our Association.

Your committee along with member volunteers works hard to make our Association a success, but I would like to ask all members to reflect on what can be achieved when the committee and the members do what they can to support the aims and objectives of the PNGAA.

Finally, I would like to specially thank Andrea Williams for the huge amount of time and effort she put into the Montevideo Maru memorial events in addition to the time and effort Andrea puts into the PNGAA in general.

As always, as president, I welcome any input from PNGAA members. Please feel free to contact me by email on president@pngaa.net or via mobile on 0410 530 502. Questions, comments, suggestions, complaints are always welcome.

I also welcome compliments that relate to our activities.

In this issue we commemorate the 80th Anniversary of the Battle for Milne Bay— Japan’s first defeat on land in the Second World War—which was a defining moment in the evolution of the indomitable Australian fighting spirit. And, featured below is Chip Mackellar’s evocative poem – is he right? Who will mourn their passing, when the last old kiap dies? 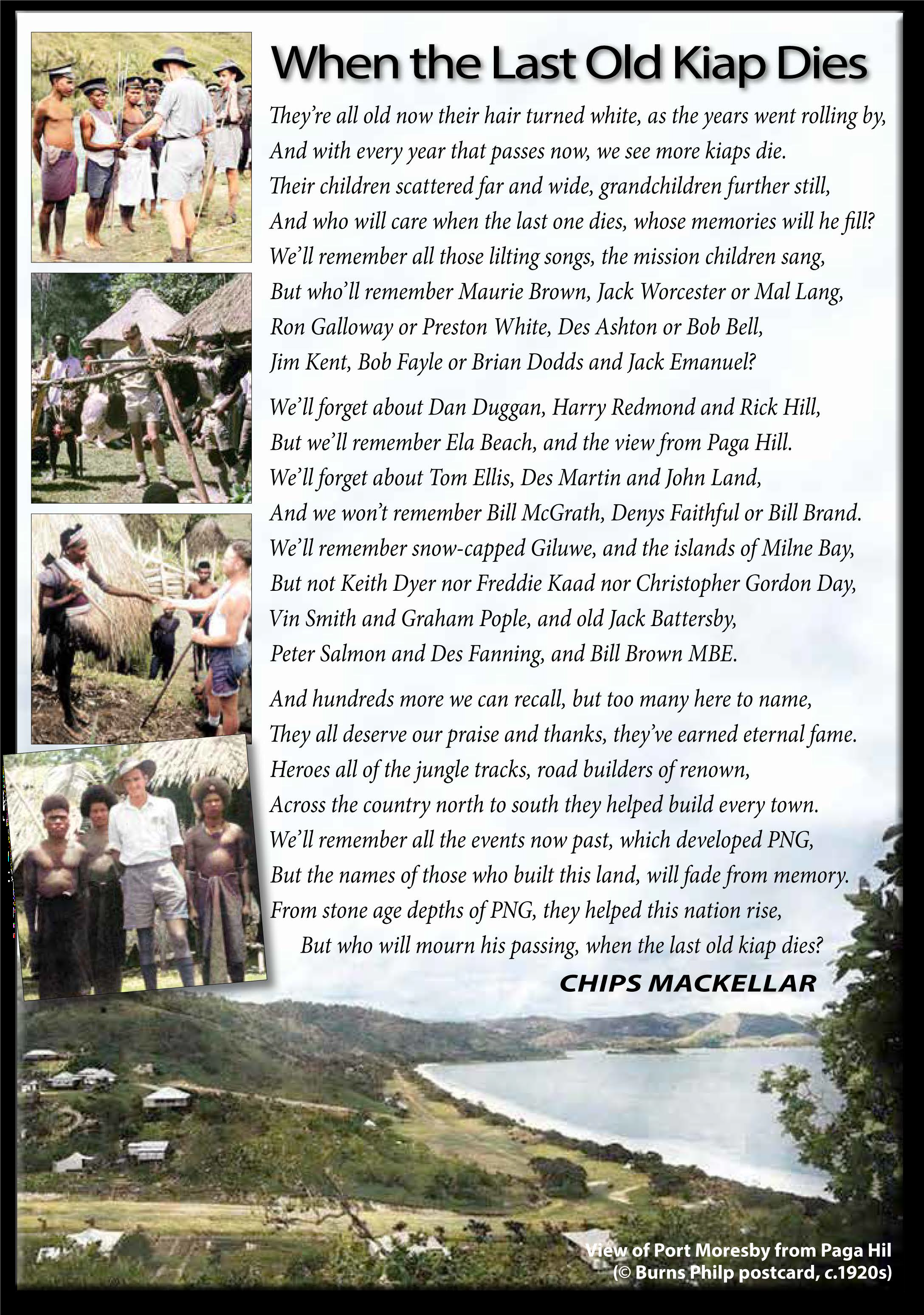