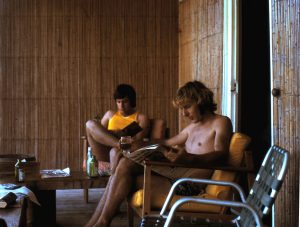 Tony on the verandah of the
Kiaps’ house at Kaintiba Patrol
Post, with Dave Henton in the
foreground

The September issue of PNG Kundu 2020 arrived the day before I was due to drive to Melbourne from my home in Swifts Creek, Victoria, to catch a flight to Cairns for my return to Tabubil, PNG. Reading the issue en route inspired me to write this. Not only because I have been meaning to do so for some time now, but because of the several articles that were relevant to my time and experiences in PNG.

Fred Kaad, Fred Pratt and Ok Tedi, the 75th Anniversary of the end of the war in the Pacific, Murua Ag Station, John Nightingale, Sean Dorney, Max Benjamin, Bob Bell and Bryan McCook have all had an impact on my time in PNG in some way or another.

Let me start with Fred Kaad. What a remarkable man. I think he should be Sir Fred, along with his well-earned OBE. I arrived in the vast metropolis of Sydney in January 1971, having driven from my home town of Swifts Creek (population 300). I was to attend the six-month Kiaps’ course at ASOPA, Middle Head, Mosman. Our mentor was Mr Fred Kaad. ‘Mr’ … we dared not call him anything else. It was a great six months spent with thirty other candidates ranging from me as the youngest at twenty to Luke Hausmans, forty-something. We took our attendance very seriously at the beginning until we discovered the various pubs in the area, Tooheys and Reschs beer and the single girls attending the teacher training courses (and it was here that I met my future wife and mother of my three wonderful children).

Mr Kaad either noticed or was told of the dropping off in class attendances and was in the middle of reading the riot act to our group when I walked in, late and half-full of booze. As I attempted to scuttle down the back of the room I was met with a roar as he pushed himself red-faced halfway out of his wheelchair and proceeded to give me a dressing down like I had never experienced before. At the end of it he told us we thirty were selected out of over 1,000 applicants Australia wide, 500-odd which were interviewed and psych tested and that we had better pull our heads in if we wanted to be going to PNG.

Not only did we feel from then on a fairly special lot but, over a few beers that night, we all tried to imagine how bad the rest of the applicants must have been and, why us? A motley mob from all walks of life with no particular traits in common that we could identify. Strangely enough, despite our differences in ages and backgrounds, we all got on.

That was my experience with Mr Fred Kaad, one I will always treasure.

Mr Bob Bell (photo of District Commissioners on page 11, September 2020, PNG Kundu) was my next memorable encounter on being posted to the Gulf District. I remember being very disappointed at drawing the Gulf as we all wanted a Highlands posting. As it turned out it was the best thing and, standing to attention in front of District Commissioner Bell, I was told I was being posted to the inland Patrol Post of Kaintiba, established formally only several years prior. Mr Bell told me he expected me to be out on patrol nine months of the year, and we were. No electricity, no roads, one government charter flight a fortnight, weather permitting, and spent with two other kiaps, two expat primary teachers, two German missionaries—the total expat population on the station—and surrounded by wonderful Kamia (Kukukuku) people.

There were no cash crops and the only Pidgin spoken was with the police and our interpreters. One patrol lasted for sixty-two days away from the station, walking from village to village on mainly census and spreading the word on the impending self-government and Independence.

One of the more memorable treks was with ADO Dave Henton, walking from Kaintiba to Murua Ag Station, where we caught a canoe to Kerema to attend the annual Kerema ball. It was there I met didiman, Charlie Fletcher, who looked after our carriers until we returned.

Two years later I was sent to Port Moresby to attend a local magistrate’s course and, at the end of that, was told I was being posted to Ihu on the coast, where the previous kiap had been thrown in the river by some disgruntled locals. The mud and the mangroves wasn’t my idea of fun so I reluctantly resigned, went south, and began my commercial flying training. It was firmly in my mind to return as soon as possible to pursue a flying career.

In November 1978 I was accepted by Talair and returned to be posted to Vanimo to start what turned into twelve wonderful years with that company. During my tenure between 1987 and 1990, as Chief Pilot, I met Bryan McCook who, in the September PNG Kundu, wrote the story of Fred Kaad’s accident.

Bryan returned to PNG after some time away to help out Dennis Buchanan over the busy Christmas period. I was tasked with getting Bryan current again on the Twin Otter, a daunting task as Bryan had forgotten more about PNG flying than I knew at the time. However, I am proud to say he is in my log book, one of the true legends of PNG aviation.

During my time at Talair, Dennis sent me to the Solomons to help out there for several months, and it was in Kieta enroute that I met Sean Dorney. Since then I have followed Sean’s career and what a marvellous one it has been. His battle with MND goes bravely on and, having lost a brother-in-law to that insidious disease, I have nothing but the utmost respect for his courage and determination.

I also read Fred Pratt’s article on Ok Tedi and he is another I had the pleasure of meeting through our mutual friend, Richard Leahy. Having spent the past twenty years flying the Dash 8 based in Tabubil, it was fascinating to read of the early exploration days in the Star Mountains.

Max Benjamin and John Nightingale also feature in the September edition, unfortunately, as they have both been lost, far too early, to all of us in PNG. Through my time based in Rabaul with both Talair and Islands Aviation, I was fortunate enough to have met both these remarkable characters, like so many others who have made my PNG experience such a rich and rewarding one.

Last, but not least, was the mention of the 75th anniversary of the end of the war in the Pacific. My Dad did two tours of PNG with the Australian Army during the war and I blame him for my lifelong fascination with the country and its people. VP Day also has special significance to me as it was on this day in 1945 that my father met Mum, a twenty-one-year-old girl in Melbourne. Sixteen days later, on the first day in Spring, they married and the union lasted sixty-five years.

I head back to PNG for a twenty-eight-day tour, reflecting on the past forty-two years of continuous flying up there. My short stint as a kiap will always remain very special to me as will my flying days—hopefully,

A special thanks to those who produce this wonderful magazine, which I look forward to receiving every quarter.