‘Your task is to go and improve the standard of plant maintenance in New Ireland,’ Ted Hicks the District Commissioner of Wewak directed me.

I arrived in Kavieng, February 1969 and was booked, with my wife, into the Kavieng Hotel. It wasn’t a posh hotel, no aircon, and that night we were overrun with the biggest cockroaches I had ever seen. So I didn’t get much sleep.

In the very early hours of the morning I got up and wandered downstairs to be greeted at the bar by a small group of expats: ‘We’ve got rum on tap. What would you like for breakfast?’ Not a bad crowd of local businessmen and traders. Pat Gallen was the proprietor and looked after us well. 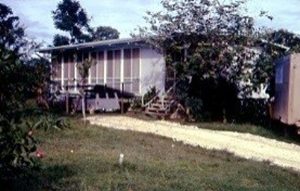 Bevynne’s house in Kavieng. His Morris 850 station wagon is in the carport.

The next day I was picked up and given a whirlwind introduction to the layout of the town, shown the workshop and various accommodations. We moved into a two-bedroom bungalow which to my wife, after the house in Maprik, was real civilisation. The house was fully furnished as we arrived only with our suitcases. My tools were shipped in crates to arrive later. We had to clean up a bit of mildew. At the time I didn’t realise that the District Works Officer had a much bigger house with a view. The DC, Les Williams, who I didn’t meet for quite some time, had a huge house on a ridge overlooking a scenic view.

When I arrived at the works depot, there was a mess of gear lying around. I had no idea who the previous workshop foreman was, and things were definitely not in a shipshape order. But, together with the obliging local staff, we soon got into sorting things out. This task took me about ten days.  We could then start on repairs and servicing.

My chief offsider was Francis who helped me out right from the start. Joe was a welder and Linus a liklik mechanic. Labour personnel varied between six and eight, not including drivers and plant operators, and I had to train them as well. I was responsible for keeping monthly staff time sheets and this took considerable effort due to variations in attendance. My initial workhorse vehicle was a Land Rover utility.

In June of that year I was joined by Jeff Sheldon, newly arrived from south, as a leading hand mechanic. Living in the single quarters, he had no vehicle and I picked him up on the way to work. An industrious worker, he was missed when he left to return south after about twelve months.

A function of this sorting out was to set up a wall-mounted plant maintenance schedule showing the plant item, its description, service type—(minor) filters and adjustments; (major) oil change, hydraulics, etc. Plant included graders, loaders and dump trucks. We now had a plan to work by.

There was a need to include training of some of the local mechanics who, up to then, were barely keeping up to the necessary maintenance standards.  Hands on training included removing cylinder heads, fixing hydraulics, general servicing and filter changes.

Spare parts were always a problem. I had to get my library of manuals sorted so I could reference requisition orders, write out and send to stores in Rabaul. Everything had to go through Rabaul. This paperwork sometimes kept me up at night. Heavy spares were delivered by ship, lighter stuff such as filters came by air. Delays were inevitable. My office was at the northern end of the workshop complex, with desk, telephone and book shelves. At the opposite end was the lubricants store, which was cleaned up, drums set up on pallets put together by local carpenters.

I reported to my boss, Wally Howard, the Regional Mechanical Supervisor based in Rabaul. We discussed problems by telephone. He made onsite inspections about every three months which were always helpful. We also socialised with the administration community usually at the RSL or the hotel. 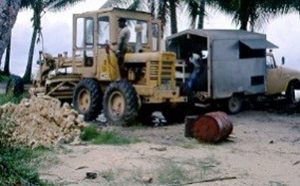 The trusty C1300 International set up to work on a grader at Lukurumau Plantation on the beach, off Boluminski Highway, 1969

My support transport to travel down the island had to be booked from the Admin Transport, and what was then available was not always suitable. And then we got International 4×4 C1300s, a complete workshop on the back of a truck, including welding gear. But the configuration of two wheels front and back didn’t help on the rough roads. The vehicle was unstable on corners because of the weight we carried. Dual rear wheels would have been more suitable. I had to drive carefully to avoid serious accidents. What a boon the C1300 was to me. I travelled the length of the island going through all sorts of villages and plantations. I faced many incidents and problems but these are for another day. u