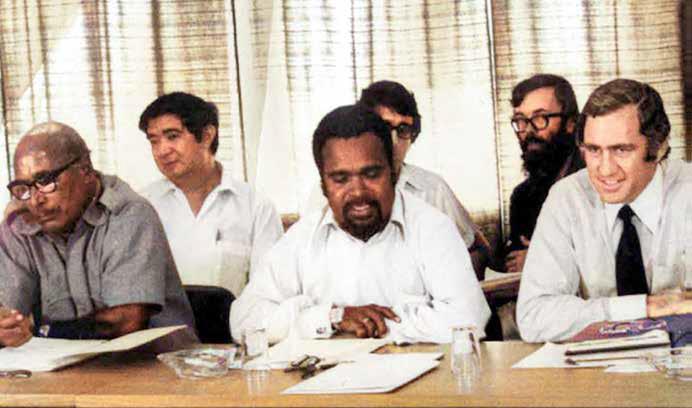 In 1971 I was labouring under a variety of pressures as a very young Minister for the Army, having been appointed at the age of thirty. As you know, we were very heavily involved in Vietnam. I had already visited Papua New Guinea once whilst a student at Melbourne University. The Army portfolio took me frequently to PNG because as Army Minister I was responsible for the Pacific Islands Regiment (PIR) as it then was, now the PNG Defence Force. However, when Ceb Barnes (Charles Barnes, Minister for Territories, later External Territories, from 1963–72) stood down, I took over his portfolio.

I was sworn in on 2 February 1972, and I spoke with Ceb Barnes, spent an hour with David Hay, who had been Administrator and was then Secretary of the Department of External Territories, and then flew to PNG, which in those days involved going via Sydney and Brisbane and only then up to Moresby. I arrived on the same day I had been sworn in and immediately held a press conference!

My predecessor, Ceb Barnes, had emphasised that I was going to have to address law and order issues—I didn’t find this surprising because there were already stirrings for self-government. There were the demonstrations led by Michael Somare of the Pangu Party, there was extensive cargo cult activity, a breakdown in law and order was commencing, particularly in the Highlands, payback attacks were rising and there were the stirrings of secession on Bougainville. It seemed to many a tenuous situation.

So, I made my first ministerial visit with my firm view that, given the deterioration in the security situation, if the government sought to restrain the movement towards self-government and independence, it would bring about a backlash of perhaps even horrific proportions—even in a relatively small country such as PNG.

I didn’t have much guidance on what awaited me in PNG. I knew that I had a first-class Administrator in Les Johnson, who wanted to move the pace. David Hay had been more conservative as Administrator, but then he had been enormously

constrained by Canberra. The Department of External Territories gave the Administrator very little leeway whatsoever; Administrators had to report back to Canberra all the time for advice. David, therefore, understanding this situation, wanted, as Secretary of the Department, to free things up.

I made something like twenty-one trips to PNG in 1972. But, as I said, I was already convinced when I first arrived that we had to move sooner rather than later, although I was constrained in the first two months because we had to await the House of Assembly elections. This election was fought on the issue of whether or not there should be internal self-government.

The largest party, the United Party, was opposed to self-government. I got sick of going around PNG to be met at airstrips by a man in a grass skirt with a bone through his nose, bilas (a decoration such as feathers, paint, plants, etc.) in his hair, carrying a bloody pig and a bilum (string basket) and someone standing beside saying, ‘This man is the physical embodiment of the reason why you can’t have self-government.’ It was quite clear that it was a setup—it happened too often. This was part of the United Party’s orchestrated campaign opposing early self-government.

The elections were held in late February and early March. The House of Assembly was to convene on 20 April and the first vote there would determine who had the numbers. To form the Government would require fifty votes. The results of the election gave the United Party forty-six or forty-seven seats.

The Pangu Party under Michael Somare had twenty-six or twenty-seven. The Peoples Progress Party under Julius Chan had ten seats.

The night before the House of Assembly convened on 20 April, my Press Secretary, Michael Darling, brought me a count which showed that Pangu, with all their efforts to form a coalition still only had forty-six members and, therefore, were theoretically one short of the United Party. At the very time I was reading this, Les Johnson brought me a statement of Michael Somare’s announcing that he did have the numbers, that he had more than fifty votes, and that the Peoples Progress Party had better decide whether they were going to join Pangu in government or not. In fact, Somare, consummate politician that he was, announced that he had the numbers when he didn’t—it was a bluff and it worked.

So, PNG now had a government comprising a national coalition that, in the case of Pangu, wanted immediate self-government, but in the case of the People’s Progress Party was more interested in the form of the government that was put together. Michael Somare saw me the next day and said, ‘I want early, not immediate, but early self-government, but at present I’m more interested in the shape of self-government.’ I responded by proposing that we hold constitutional talks in June 1972. Interestingly enough he suggested July—a month later.

I want to emphasise that all of the travelling I did to PNG and all of the discussions I held there just reinforced in my own mind the view that though Australia had been slow at moving towards acceptance of independence, we were now on the right track. The worry was always that when we did transfer power, there would be a lack of depth in the PNG civil service. It seemed to me we couldn’t correct that overnight. We had established training colleges and these were doing a sound job, but there were still insufficient trained people.

On 27 and 28 July, Michael Somare and I sat down to discuss the transfer of extensive legislative and administrative power to PNG. We had an enormous range of powers and programs to hand over. Some powers had already been transferred but even so Australia had until recently exercised a veto because the Governor-General, on the advice of the Minister for External Territories, could overturn any proposal by any minister in PNG.

Matt Toliman, Leader of the United Party, was not in favour of the more rapid pace towards independence—the United Party was starting to adjust to the fact that there had to be self-government, but they weren’t keen on independence.

This period really did see the development of a framework for PNG as a fine independent nation, and I think it is important to recognise that the way in which a trustee leaves a territory is extremely important. I was always very proud of the way we finished the job.

I say ‘we’ although the Coalition was swept out of power on 2 December 1972 and the actual task of seeing through the date of self-government and independence was left to the then Labor Party. Gough Whitlam and I used to talk about it a great deal. And it does seem to me we left PNG with a substantially larger reservoir of goodwill between the former colonial power and the newly-emergent country than existed in most other comparable situations.

I should add that there were also, of course, pressures in Australia, from those in favour of a federal structure, to desist from faster moves to early
self-government. But I was strongly of the view then that a country, containing 500 different tribes speaking more than 700 different languages, needed not a fragmented system, but a more centralised system.

After I ceased to be Territories Minister, the question of autonomy for Bougainville arose. I’d always believed that Bougainville ought to have a degree of autonomy, but when the provincial system of government was first mooted in PNG, I discussed the matter with Michael Somare. At that stage I was the Shadow Foreign Minister and I rang him and said, ‘Why are you doing this? Why are you setting up a provincial system of government? This is going to haunt you in the future.’

And he said to me (and I well remember the conversation), ‘If I don’t establish a provincial system, I may lose Bougainville and PNG will end up just another exporter of coffee, tea and copra. I have to have Bougainville’s copper contributing its resources and revenue to the task of nation building. Unless I give Bougainville that autonomy, PNG will not be a viable entity.’ This was the origin of the system of provincial government. I agreed with Somare’s political assessment. He persuaded me, as so often was the case.

I think PNG owes the Somares and the Chans of this world an enormous amount. Particularly, at that time, Michael Somare. I had met Somare when I first went to PNG and when he was an angry young man. He was to become a very close personal friend. I suppose in those days we were both a couple of smooth operators and we probably deserved one another! But we were able to achieve a fair amount together and his astuteness, his timing, his capacity for negotiation in 1972 in putting that coalition together was something at which I marvelled.

And it is well to remember that had it not come together, then the future of PNG and its relations with Australia would have been vastly different. I had started out on the assumption that because the Westminster System was the system I knew well, it was the system for PNG. But I very quickly came to realise that institutionalised division between government and opposition might well be the antithesis of what a Melanesian society requires—a society where you need to sit and talk and talk your way through problems. At the end of the day we did hand over a Westminster System, but we did so on the basis that we expected this to change and change substantially. I’ve been amazed that it hasn’t changed to a far greater extent.

PNG achieved independence on 16 September 1975 and here we are in December 1993. I think we are witnessing a situation where, for whatever reason, bilateral relations have drifted somewhat.

I think it is a slightly ominous drift. If I were to name Australia’s key foreign policy relationships, they would have to be: PNG, New Zealand, each ASEAN country, Japan and the United States. Of course, it is always a dangerous thing to identify ‘special relationships’ because those not deemed as special can take offence—though it’s not as offensive as accusing someone of being recalcitrant. But I don’t think there would be too much disagreement over this list.

And so, I conclude a fairly personal account of an interesting ten months in PNG. I have left many anecdotes out, but nevertheless, I have tried to give you the flavour and thoughts of someone seeking to bring about historic change.

Edited extract from Lines Across the Sea: Colonial Inheritance in the Post-Colonial Pacific