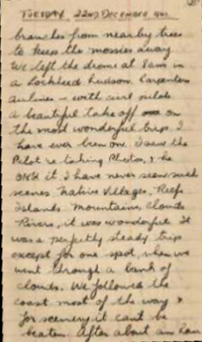 A page from Gibson’s diary

A diary, a phrase book, and a box of negatives—with no provenance, needed dusting off—to see if we could reveal the story of ‘Sergeant Herbert’, and we really didn’t know that was his name—it was a guess made from the name pencilled on the front cover of the phrase book. Now digitised and transcribed – here is the reveal …

The diary begins on 16 December 1942 with the author reporting to the Townsville Flying Boat Base to get a ride to Port Moresby; five hours later he was picked up at the wharf by a car that had been cobbled together from several vehicles, no doors or bonnet, and was dropped at the sergeants’ mess for a meal.

At this time Port Moresby was full of allied soldiers, engaged in its defence from Japanese forces—most recently from an overland advance from the north coast, via the Kokoda Trail and Owen Stanley Range, intended to isolate Australia from the United States.

Notes from the Diary

He sought out Padre Percy Sands, the RAAF Chaplain who ran the Recreation Hut, which provided activities for off-duty servicemen, and the next day set up a projector, checking it several times during the afternoon.

The following day when the Mobile Cinema arrived, he erected the ‘plant’ and met the operator, Frank Hall, from Newcastle; he was also introduced to Les Bell (b. 1905/d. 2000) a radar operator, who lived in New Guinea prior to the war and was a cousin to a friend in Edmonton, near Townsville, Val Plate. 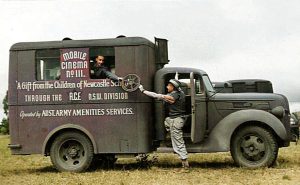 Mobile Cinema Unit No. 111 of the Australian Army Amenities Service

In between commitments ‘Herbert’ was keen to explore—he met up with Flight Sergeant Harry Drake and spent the day hitching rides on jeeps and army trucks—travelling high in the mountains, stopping at a hospital unit at Koitaki and continuing to Rouna Falls, bordering the Sogeri Road.

He had borrowed a webbing bag from Drake to carry his 16 mm camera and film and took many photographs—although the falls are not represented in the small box of negatives in this collection. Their day was long—hitching rides home was less successful, having to walk a number of miles, and shelter from torrential rain, eventually arriving back in town too late for dinner.

Having instructed the padre in how to operate the film projector, he made arrangements to visit Milne Bay—this time aboard a Lockheed Hudson aircraft, and with permission from the pilot took photographs of the scenery along the way—villages, reefs, islands, and cloud formations, until they reached the forward-position on the far eastern end of the Papuan peninsula. 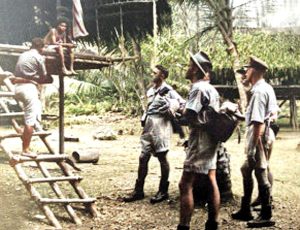 Here he set-to repairing a projector at 100 Squadron (RAAF) camp, staying with the ‘photo section’ and enjoying their unique kerosene-tin shower. ‘Herbert’ then spent Christmas and Boxing Day 1942 exploring villages and battle sites in the area with his camera.

‘Herbert’ waited more than a week for transport back to Port Moresby. His diary details his ‘adventures’—being led astray by crafty villagers and bargaining for souvenirs; it also documents his visit to a mass Japanese grave site, and a side trip flying up the coast to deliver parts for a damaged aircraft before he finally returned to Port Moresby.

There was an obvious association between ‘Sergeant Herbert’ and the Mobile Cinema units. The answer lay in the collections of another man, also held at State Library, Gordon George Gibson (1913–54) who was born in Charters Towers and later lived in Edmonton, North Queensland where he worked as a cinema projectionist at the Regent Theatre, from 1939 to 1941. 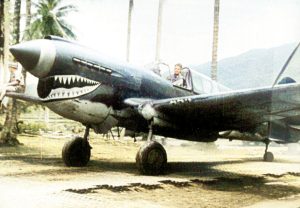 Gibson then served in the Royal Australian Air Force from 1942 to 1946, as a cinematographer and technician, who maintained cinema equipment in the North East Area which included Horn Island, Port Moresby and Milne Bay. There are four collections relating to Gibson held by State Library; one in particular, OM87–26, includes a biography written in the same hand as ‘Herbert’s’ diary—in which Gibson recorded spending Christmas 1942 at Milne Bay.

The diary and negatives, which have been digitised from ‘Sergeant Herbert’s collection (now Gordon Gibson Diary and Photographs) will soon be available online, and images which were obviously taken during his trip in

Many thanks to staff member, Hannah Nguyen, for transcribing ‘Sergeant Herbert’s’ diary and so revealing his true identity, and which now also informs the images in his other collections. 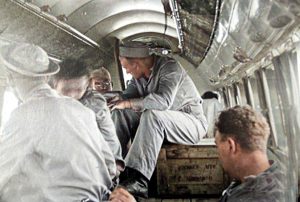 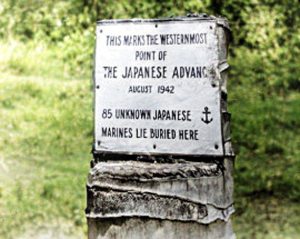