It was the first Australian town ever to be attacked. Japanese aircraft carriers and bombers were involved, the end result was devastation and many hundreds of Australian civilians and soldiers killed. You’re probably thinking of the Bombing of Darwin, which happened this day 75 years ago – right? 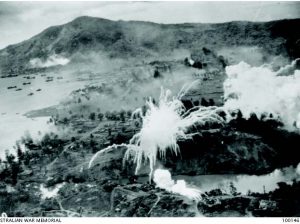 You’ve seen comprehensive media coverage, including a live broadcast of commemorations in Darwin led by the Governor General and Prime Minister. Many of you will have shaken your heads in astonishment at the old newsreel film showing Darwin in ruins and reporters telling you that 243 Australians were killed in these raids, which were downplayed for obvious reasons at the time.

If I told you that the first attack on an Australian town was followed by the heinous massacre of 160 Australians who’d surrendered to the Japanese, and the internment of another thousand who would all die in one night in the biggest single loss of Australian lives in one incident in WW2… would you be confused or would you think I’m just making stuff up? Because the Japanese never actually landed at Darwin …or did they?

No. Because I’m not talking about Darwin.The first Australian town to be attacked in war was Rabaul. Rabaul also was the capital of an Australian Territory – The Territory of New Guinea.

New Guinea – not the PNG you know today – was governed and administered by Australia after being mandated to Australia by the League of Nations post WW1. In fact the first battle, casualties and medals by Australian troops – well before Gallipoli – was when Australia seized German New Guinea in September 1914. But that’s another story and some readers might be confused enough already.

So, back to Rabaul 1942. Administered by government departments answering to Canberra. Populated largely by Australians in the public service and an Australian garrison of soldiers and airmen. Its acting Administrator was the brother of an Australian Prime Minister (Earle Page) and among the civilians were the uncle of former opposition leader Kim Beazley and the grandfather of Midnight Oils singer-turned politician-turned singer Peter Garrett.

The deaths of those three of course were no more tragic than the other 1400 Australians who died as a result of the Fall of Rabaul but are mentioned to easily and simply reinforce that – yes – Rabaul was an Australian town and New Guinea then was Australian ‘soil’. That’s a fact not an endorsement of colonialism.

The Japanese on January 23, 1942 invaded and occupied Rabaul with a massive fleet fresh from Pearl Harbour. They made it a Pacific fortress from which they launched the Kokoda and Buna campaigns among many others and the Battles of Midway and Coral Sea. Up to 300,000 Japanese were garrisoned there from 1942-45 and five airfields hosted 300 bombers and fighters.

Rabaul the Australian town – previously called the Pearl of the Pacific – was to be reduced to rubble or nothing by war. Most – and I repeat MOST – of its inhabitants never survived the war. Fourteen hundred died. Yes, 1400. So, less than a month ago it was the 75th anniversary of the Fall of Rabaul.

But you’re confused, right? You didn’t see it on the news or read about in the media, right? Surely, even though you might not personally have known of all the details above, the media and Australian authorities would have ensured that the tragic events and victims of this milestone were remembered. Right? Wrong. Rabaul is our national blind spot. Our collective myopia. We rightly commemorate the Bombing of Darwin. We rightly remembered the 75th anniversary of the Fall of Singapore last week. We recoil at the horrors of both Darwin and the Singapore aftermath. So we should. Lest We Forget.

But why has Australia forgotten Rabaul? Why is it not in our school curricula – like Gallipoli and Kokoda and Singapore and Darwin? With some remarkable exceptions, why is Rabaul such a mystery to most Australian journalists? Why is it that most Australians have never heard of our biggest maritime disaster – when 1053 Australians from Rabaul – soldiers and civilians, boys and granddads – perished in the sinking of the prison ship the Montevideo Maru? A monument to the 1053 civilians and soldiers killed on the Montevideo Maru was erected by Rabaul townsfolk and descendants. That’s 15% of the total of Australian POWs who died in captivity. It’s double the number of Australians killed in the Vietnam War and many more than died in the sinking of the HMAS Sydney (645) and the hospital ship the Centaur (268). The number of Australians who died as a result of the Fall of Rabaul is nearly five times the number of victims in the first bombing raid of Darwin 75 years ago today, though an estimated 900 were killed in all Darwin raids over months.

None of those of us who do know the story of Rabaul and New Britain can really put a finger on the answers to all the rhetorical questions I’ve posed above. Perhaps – initially, in the decades after the war – it was multiple shades of shame. Shame that the town and its people had been abandoned. That infamous official cables showed the government of the day had described the men of Rabaul as “hostages to fortune”. That they ordered the pitiful garrison to “stand and fight” – with a couple of WW1 vintage anti-aircraft guns and handful of Wirraway trainer fighters – against the might of the multiple aircraft carriers, destroyers, submarines, hundreds of bombers and fighters and 5000 Japanese marines in landing craft.

Shame that they ignored requests to establish escape routes and hide munitions and food in the hills. Shame – and this perhaps is the most galling – that they expressly forbade Australian civilians from escaping on a massive Norwegian freighter in the week before the invasion. That potential evacuation ship the Herstein was ordered to continue loading a cargo of copra -rather than than a cargo of humans. It could have taken hundreds of Australian civilians let alone a Chinese women and children and loyal New Guinea workers employed by our administration in our ‘protectorate’. Hundreds perhaps thousands of the latter groups were executed, starved and imprisoned. It still rankles those communities today – and should. And mixed in there perhaps the shame of the order “every man for himself” as shocked Australian commanders finally realised what a ridiculous, shambolic and shabby affair it really was.

Perhaps it was the decades of obfuscation around the fate of the 1053 men on the men on the Montevideo Maru, which led to decades of misery and heartache for families. Perhaps, too, it was the shame of the indirect result of the bumbling of Rabaul – the Tol massacre that I wrote about recently on its 75th anniversary.

Maybe it was too easy to ignore, and too hard to talk about, in a post-war period when so many had suffered in so many theatres. But there’s no excuse today not to right the wrongs of the past. The war is long gone but the pain and anger of descendants of victims will not fade away. The anger part could be eased – by giving the events of Rabaul 1942 due respect and recognition.