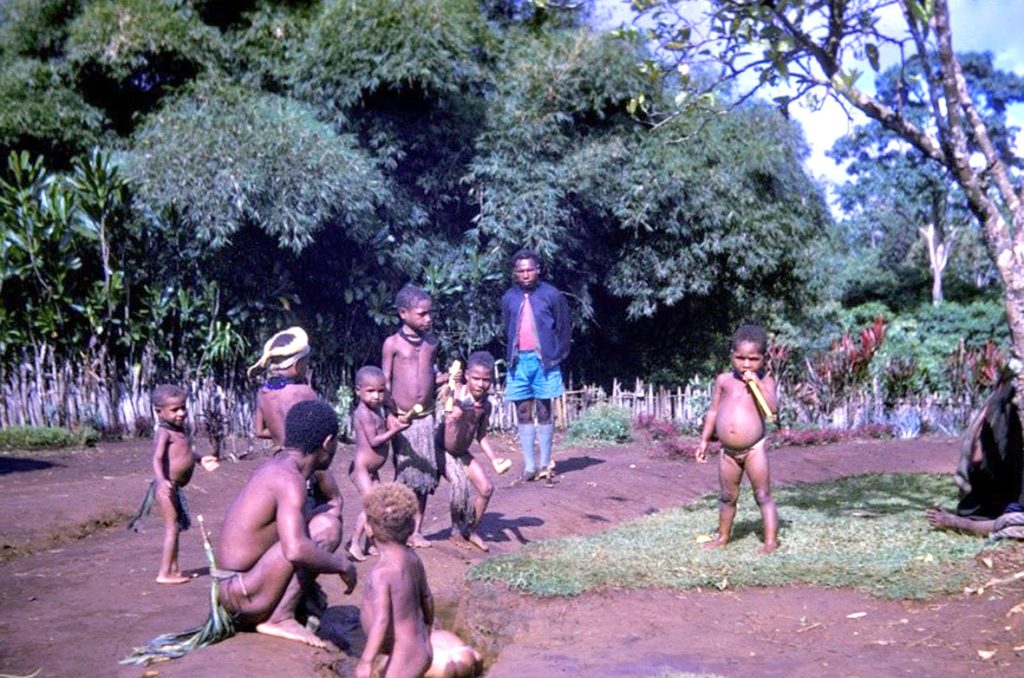 As the plane took off from the Unani airstrip I realised that it would be three weeks before another came to take us back to Kundiawa. I had volunteered to be a medical attendant to the annual patrol around Bomai in the south west of the Chimbu District. What I had not realised was quite how isolated we would be down in the tropical rainforest of Bomai.

The people of the Bomai are said to have migrated here from Karimui about a generation ago, in order to act as agents for trade in feathers and fur. They had formed loose gatherings and had been persuaded to build a basic haus kiap (government rest house) in five different locations. The airstrip in Unani had been built in 1962 and there were villages in Sivika and Talabakul. To the west was an extinct volcano Mt Au (Suavi) and we planned to walk around it, entering the Western District before returning to Unani to be picked up. It took us three weeks as we had to supervise the clearing of a new airstrip at the base of Mt Au for a week. The first patrol came through in the early 1950s and the first medical patrol was mounted in 1957 during which anti-yaws injections were given. In the following years three aid posts were established.However, there was no time to lose as people were gathering for the annual census and tax paying with sweet potatoes. There were disciplinary matters and disputes to be settled. The young patrol officer had already set himself up and was in conversation with the two policemen. The chief came up and was presented and he proudly paraded his thirteen wives. Many of these had been married to his two brothers who had been killed in fighting some years before and they now took refuge in his house and under his care. Unani had a population of 352, tiny compared to normal villages but was important in the Bomai. The roll call was taken and all births, marriages and deaths were noted. It was 1969 and the likely given year of birth this year would be ‘taim man em i go sanap long mun’ (the time when man stood on the moon).

Bomai lies at a lower altitude than Kundiawa and although chest infections were less, they were greatly troubled by malaria. However, spraying with DDT under the Malaria Eradication Program had been effective and the population was increasing. There had been a medical patrol in the previous year for mass vaccination and an inspection for leprosy. This was repeated in February 1969 and in March a health educator had done his rounds. The first aiders were building up a rapport with the population, but the people still did not trust them for antenatal care or delivery. They were generally effective in treating gastroenteritis and pneumonia and skin complaints were common. 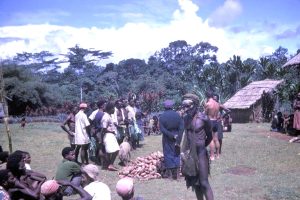 I examined most of the population, checking for the size of their spleens. There was a prevalence of between 5% and 20% of enlarged spleens which indicated a fairly high malaria transmission. Scabies was prevalent and skin infections common. Twenty patients with leprosy were examined and some had rather irregular supplies of medicine. Half the deaths were in children under ten years of age. I treated the sores and scabs and tried to advise about backache but in these environments, where strong physical activity is essential, backache is normal.

After a couple of days we walked along paths through the tropical rainforest to Talabakul. The going was rough and we were glad of guides cutting back creepers from the path. Rivers were crossed by wading through and the way was wet and 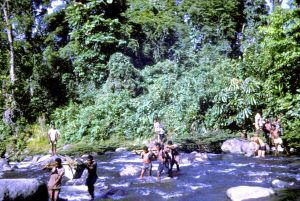 bumpy. I had a pair of ‘jungle boots’, which were very useful as they used to keep the leeches out. However, one evening as I took them off I found a particularly full and bloated leech under one of my toes. It had obviously enjoyed its meal and I had no problem dislodging it with a lighted match. One of my most useful medicines was ‘wara bilong paia’ (fire water)—or iodine mixture in spirit, which I used liberally on all open sores or leech bites. That it stung like anything must have been a sign of its potency. It was well respected.

We worked our way round to Mt Au and came to the airstrip that had been partially cleared. The massive trees had been felled with axes and then pulled by a big team of men pulling on several lianas tied around the trunk. They had cleared a 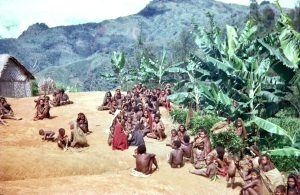 Mothers and children waiting their turn at Jimi Valley clinic

respectable area and on the last day we were honoured by the weekly flight approaching and making a pretend landing to encourage the team to finish the job.

At roll call later I was struck by the number of men with dramatic headdresses made of bird feathers. It turns out the nurse aide had a shotgun and birds had become fairly scarce in the vicinity. Soon we were on our way back round Mt Au and eventually arrived at Unani. The plane came on time and we were soon back in Kundiawa. It was an interesting trip with the intention of showing a medical presence and boosting the status of the aid post orderlies. 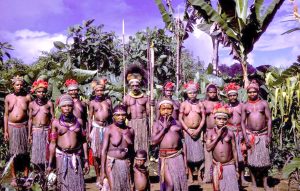 Bomai chief and his thirteen wives

week patrol in the remote and isolated Jimi Valley in the north of the Western Highlands District. It is now in its own province of Jiwaka bordering Madang Province. At that time there were no roads into the valley so we flew from Banz to the one airstrip. There was a road there along the valley with just two vehicles in the area. A young researching doctor was doing a follow up of a survey into cretinism—an unfortunate byproduct of a diet rich in phytates in mountainous areas that blocks the absorption of iodine, and thus the manufacture of thyroxine. The children are born with lifelong mental problems and often die by the time they reach about five years old. 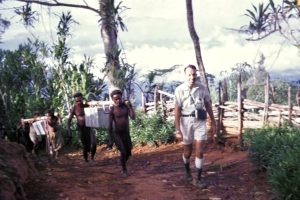 looking at as many children as we could. The people were extraordinarily friendly and welcoming and progress was excellent. The paths between villages were good and the large liana bridges across the Jimi River, though wobbly, were strong and trustworthy. We examined many children and the researcher was well pleased.

When I returned to London, I finished my degree and started on the rotation of junior hospital doctor appointments. However, I then spent a year-and-a-half in South Africa, where I was able to put some of the skills I had learnt into use. I also found that the health service in Papua New Guinea gave a far better community health service than that which was on offer to the black people of South Africa. Then, after marrying my wife Annie in 1977, we went to the Solomon Islands for 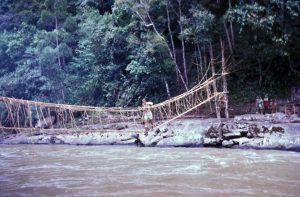 three years where I was really able to make a difference as a medical officer in Malaita then Gizo.

After that I was a general practitioner in Devon, England but, after retiring, I spent fifteen months working with my Annie, a nurse, in the HIV department of a mission hospital in Tanzania under the auspices of VSO (Voluntary Service Overseas). I became quite an expert in Tanzanian HIV! We were then so lucky to be able to spend a year in the third great Melanesian country of Vanuatu, again under the auspices of VSO. We were able to help, advise and care for another Melanesian group—though the taxi drivers always reckoned my bislama of Vanuatu was not authentic, but a corruption of Pidgin English from the Solomons or even Papua New Guinea. We were so pleased to be able to help and serve in all three countries.