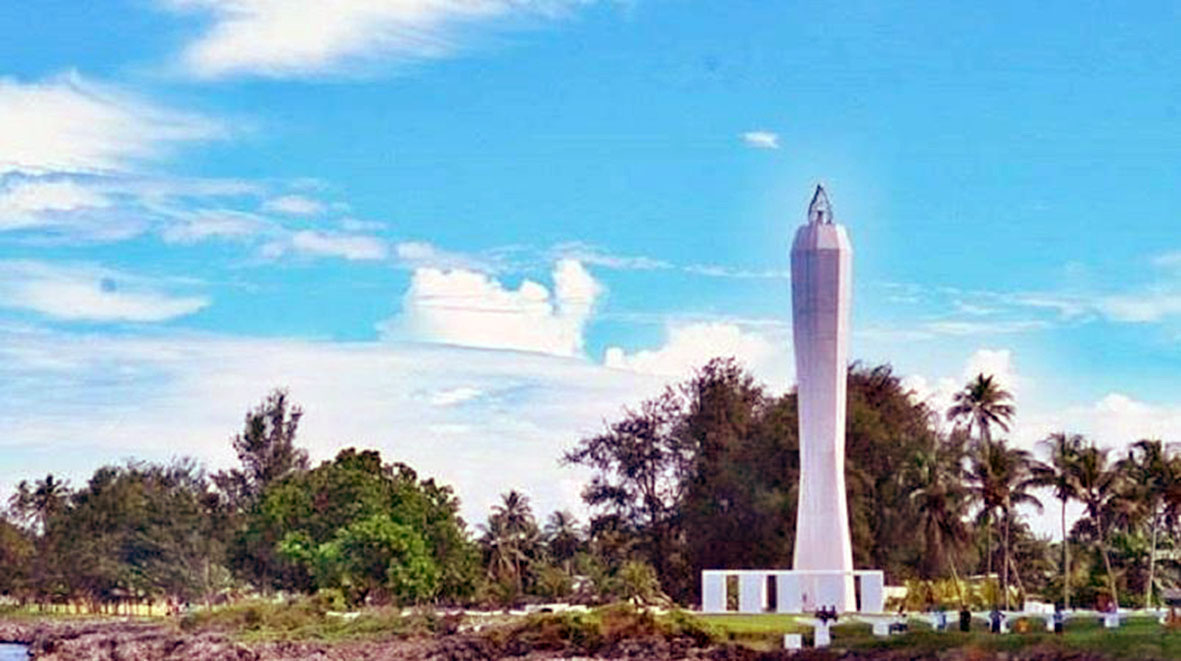 One issue that receives less attention than it deserves concerns the role of the native troops throughout the islands north of Australia who played a crucial role in the defence of their own countries and Australia as well. These native troops included men from Papua, Bougainville, Buka and the Solomon Islands (where they were known as Scouts), Java and Timor.

Whilst this article is dedicated to the local men of New Guinea who were recruited and trained to serve with the Coastwatchers, there were two other bands of nationals who contributed so much to the Allied war effort in the South Pacific and thus deserve appropriate and well-earned recognition.

First, the Fuzzy Wuzzy Angels (with no military status) comprised the untrained volunteers, and indeed sometimes conscripted natives, who assisted and carried injured Australian soldiers down the Kokoda Trail, and retrieved all supplies and ammunition dropped by parachute from the C47 Dakotas. They have been deservedly highly publicised and recognised as heroes, by all channels, including governments, the Australian military forces and the media. 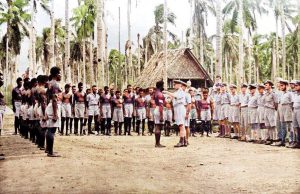 Second, a Papuan Infantry Battalion (PIB) had been formed with 500 nationals (led by 77 Europeans) in early 1940, being recruited and fully trained with weaponry to engage the enemy. When the Pacific War in 1942 eventuated, they became the unsung heroes who carried out sterling support of the young and undermanned troops of the Kokoda Trail Campaign. This was then followed by further missions at Buna, Gona, Sanananda and Salamaua, then further north to the Ramu Valley and Finschhafen, moving forward to push the retreating Japanese towards Saidor.

However, the natives who served with the Coastwatchers were also little known, except for any readers of the book The Coast Watchers written by their founder and Commander, Eric Feldt.

Moreover, it should also be noted, despite the countless number of natives who served in each of the above categories, there has been an almost total indifference to those natives who were killed, of which there were many! Despite considerable searching, I have been unable to ascertain the number killed while serving in their various capacities, and can only pay homage, richly deserved, to those indigenous heroes, who served and died while performing their duty in defence of their homeland and ours.

Because of my own service in Papua New Guinea I worked with those men and I would like to relate some of their contribution here, from a coastwatching perspective. 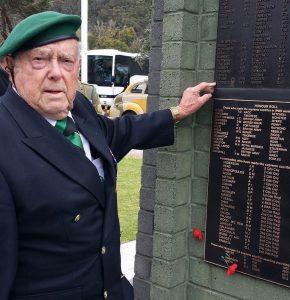 The author with names of fallen comrades from Australia and the Pacific on the memorial at Tidal River, Australia

Our trained Papua New Guinean allies performed a range of essential tasks. They carried our radio equipment and all our other gear, climbed coconut trees to erect radio aerials, built our thatched accommodation and retrieved our food and other supplies dropped in parachuted ‘storepedos’ by Liberator bombers or Catalina flying boats. They also performed several functions in relation to our daily living such as cooking, washing, digging holes for the latrines and the security duty of maintaining escape routes. Importantly, as recorded in Feldt’s book, using their local knowledge and language skills to elicit information, they guided and warned us when on patrol.

In his recent article ‘Remembering the “wasman” of Papua New Guinea’, Paul Slater* reported that in 1943 the Allied Intelligence Bureau (AIB) brought 76 native men from Port Moresby to train at a camp in Queensland. This occurred because it was recognised that insertion of Coastwatchers into the islands to observe and report on Japanese positions and movements would not work without local assistance.

And so the young men from the islands trained with the Australians at Tabragalba. They were armed with US M1 Carbines, better for jungle fighting than the Army’s bolt-action Lee-Enfield.

They embarked on an Australian hospital ship bound for Townsville. From there, they travelled by rail and road to the secret camp at Tabragalba, not far from Canungra in the Gold Coast hinterland. Here they trained as Coastwatchers. More young men arrived later.

But, as I can testify from personal experience because I was there: they were not too happy! ‘Em long kol planti’ … ‘It was bloody cold!’

Anyway, as Slater goes on:

The Papua New Guinean Coastwatchers were the eyes and ears of the Australians in a place where white men stood out. The formula worked well, and the intelligence provided by the Coastwatchers would prove critical to the Allied effort.

The locals also possessed some basic medical skills! On one occasion, I had developed a nasty boil on the back of my neck. One of them straddled it with two lines of cotton (where he got the cotton from, I don’t know!) and then twisted them with his fingers to grip the edge of the boil. He then pulled the cotton and out popped the boil! 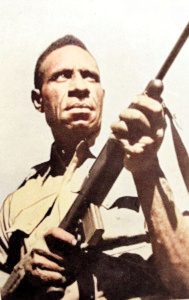 As we literally lived with these troops in the field, we soon learned to communicate with them using Pidgin English. It is a simple descriptive language. For example, the Lord’s Prayer words ‘Our Father who art in heaven’ becomes ‘Papa bilong mipela i stop long heven’.

The four essential components of a coastwatcher’s party were the expatriate leader, the radio operator, a former member of the 1st Independent Company and the Papua New Guineans, so without our indigenous allies, there would have been no Coastwatchers!

Our fully-trained Papua New Guineans were committed, like the other members of our parties, to be non-combatant. We were all under the strict mandate of the Coastwatchers to not confront the enemy, but to hide from, observe and report enemy movements.

Those local men I can name include people known to us as Yali, Mas, Buka and Mariba —although I can name many others such as Golpak, his son Kaole, Yauwika, Rayman, Ishmael, Makelli and Oras. Some, including Sgt-Major Simogun, are famous and were duly honoured with the British Empire Medal and/or Loyal Services Medallion for their fighting service. 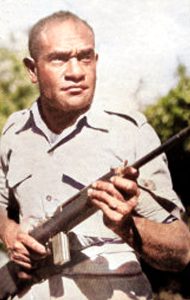 Eric Feldt’s tribute to two Papua New Guineans following their particularly heroic effort after the Hollandia Fiasco reflected his own high regard for our indigenous comrades generally, as expressed in his book, The Coast Watchers (p. 373):

Throughout the world, there has been divided opinion among the learned and wise on racial virtues. There are those who contend that the pure-bred is superior and that the mixed breed inherits the worst traits of both parents. There are others who hold that the complete mixture of races, once stabilized, is the best; others that the half-breed and all other men are creatures of their environment and training.

Coast Watchers wouldn’t know about such erudite matters. They only know that the half-caste Julius McNicol and the full-bred native Yali can have a place in any party where danger is to be faced and courage and resource are the qualifications.

Julius McNicol was later awarded the British Distinguished Service Medal for his services with the Coastwatchers, before and at Hollandia. 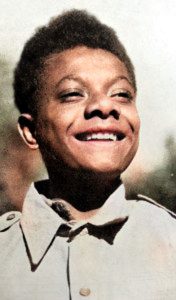 It is fitting that the names of the local soldiers killed in the islands north of Australia appear side-by-side with their fallen Australian comrades on memorials throughout Australia and the Pacific. The names of killed Papua New Guineans and Timorese Coastwatchers, for example, appear on the memorial at Tidal River, in Victoria, Australia.

Because many of these men were fully-trained AIB troops armed with Lee Enfield rifles, towards the end they were used as guerrilla fighters and were provided with more lethal weapons to ambush and kill Japanese troops. In this manner, over 200 Japanese troops were attacked and killed by the coastwatching party on the north coast of New Britain.

In return for their expert and indispensable efforts in support of the Allied cause, our Papua New Guinean troops received a weekly issue of twist tobacco.

Editor’s Note: Along with those mentioned here, there were many groups and servicemen involved in the New Guinea Campaign, including the militia unit, New Guinea Volunteer Rifles (NGVR), the New Guinea Infantry Battalion (NGIB) and the Australian New Guinea Administrative Unit (ANGAU), amongst others.

Paul Slater’s article may be seen at: https://www.lowyinstitute.org/the-interpreter/remembering-png-wasman-second-world-war
Readers may access other stories by Jim Burrowes on his website: https://thelastcoastwatcher.wordpress.com