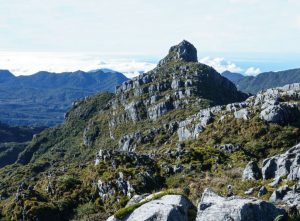 In 1963, ADO Des Fitzer, along with PO Ross Henderson and Surveyor John Groenewald, conducted the last of the great exploratory patrols into the Star Mountain foothills in the north-west corner of Papua. In 1969 stories began to circulate that the patrol had brought back copper-bearing rocks from Mt Ian. These stories seem to have originated from senior administration sources. It was quite common in those days to be in conversation with a government official, and when you mentioned that you were working for Kennecott in the Star Mountains to be told, ‘Oh, Des Fitzer brought back copper samples from Mt Ian’, as though that meant that the government, and not Kennecott, were responsible for the discovery of Mt Fubilan.

In those days copies of patrol reports were not readily available to the general public. Kennecott assumed that the patrol had come up the west bank of the Ok Tedi, climbed and named Mt Tricia (after the DO’s wife), crossed the Ok Mani and proceeded north to Mt Ian (which they named after the Western District DO, Ian Holmes), then climbed Mt Ian to reconnoitre the way to the Kauwol Valley away to the north-west.

The question asked was ‘did the patrol report record the collection of these samples?’ No response to this could be obtained. Kennecott checked with the Mines Department assay laboratory in Moresby and there was no record of assays of rock samples being brought in by government patrols, but still the claim persisted.

The Dutch were still in charge of Netherlands New Guinea (NNG) until mid-1962. The Dutch had reported that their patrols had contacted villages in the Star Mountain foothills in the ‘Taub’ valley on the Australian side of the border. The Australian administration decided to send a patrol to contact these villages, and to climb Mt Capella. Because ADO Jim Kent’s 1954 Star Mountain patrol had been unable to proceed north past the Ok Mani, it was decided that the 1963 patrol would follow the Ok Mani west to its headwaters, then follow the Ok Kwirok down to the NNG border, and then head north inside NNG to the ‘Taub’ valley. Fitzer made two reconnaissance flights over the proposed route.

The patrol departed Kiunga on 17 January 1963. On 8–10 February, while camped at Kaiumguin and Kumguit, just south of the Ok Mani, Fitzer again asked if there were tracks north of the Ok Mani along the west bank of the Ok Tedi and was again told ‘No’. The patrol proceeded on its planned route. They camped at Guirok on 16–17 February, crossed the Ok Kwirok, and headed north inside NNG to the ‘Taub’ which they found to be called the Kauwol. The patrol contacted villages in the Kauwol Valley, and on 4 March moved north into the Benkwin area. There they were unable to obtain guides. On 13 April, after forty fruitless days trying to find tracks to the north, further efforts were abandoned, and the patrol headed east to the Alice (Ok Tedi) valley. They crossed the headwaters of the Ok Tedi on 16 April and reached Bultem on 17 April.

And that was the nearest that the patrol got to Mt Ian. So, there were no rock samples brought back from Mt Ian as the patrol got nowhere near Mt Ian.

The patrol then turned east and followed the Telefomin ‘kiaps’ route to Telefomin station.