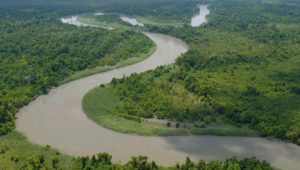 While writing his book on the 1938–39 Hagen–Sepik patrol conducted by ADO Jim Taylor and PO John Black, author Bill Gammage came across an entry in Black’s diary from the time Black was camped at Telefomin in January 1939. There were reports of a white man working to the south, who had just received an airdrop. Black sent a message, inviting the stranger to join him, but received no reply. In 1969, during a visit to Adelaide, Gammage met Jim Davidson, who told Gammage that he had been that white man. (In fact, it was probably IEC geologists, Osborne and Sadler, who at that time were working in the Olsobip basin).

Davidson spun Gammage a tale which Gammage records in his book, The Sky Travellers: Journeys in New Guinea 1938–1939, from which I quote:

Early in 1939 Davidson was prospecting for Standard Oil on the Fly-Black River Junction. On the Ok Tedi headwaters he drove off attacks four mornings in a row. On the fifth the attackers kept coming. Davidson saw a warrior astride a policeman, banging his head with a rock. He put a rifle to the man’s ear and pulled the trigger. Click. The man grabbed him and they wrestled over a cliff. Davidson fell onto a ledge and broke his leg, the other plunged into the chasm.

The incident is copied from Gammage and included in Jim Sinclair’s, Mastamak. Sinclair says of this incident:

It is a stirring account—but there are none of these lurid details in Davidson’s log. Davidson says he had a police escort. The officer-in-charge of the escort would have been bound to report the killing of the tribesman, but no mention of any such incident has been located in official patrol reports, nor in IEC nor Papuan Government records. There are no reports in the ‘Papuan Courier’ or the ‘Rabaul Times’, which normally covered such exciting incidents.

Davidson was employed as a field engineer by Island Exploration Company (IEC), which was a consortium comprised of Anglo-Iranian Oil (later British Petroleum), Vacuum Oil Co. (which merged with Standard Oil around 1934) and Oil Search Ltd (OSL). Davidson carried out a lot of survey work, though he appears not to have been a licensed surveyor. Like all IEC field employees he was required to keep a detailed daily log. A detailed account of Davidson’s activities, from 4 March 1937 to 1 June 1938 and taken from his daily log, is given in Mastamak.

The log records that on 1 June 1938 Davidson was surveying on a seismic line along the Ok Birum, on the west bank of the Ok Tedi, opposite what is now Ningerum Station. He fell and broke his leg. He was flown to Port Moresby for treatment and returned to Daru on 24 July, and departed for Melbourne on 11 September 1938 on expiration of his contract. Davidson was not even in Papua in 1939.