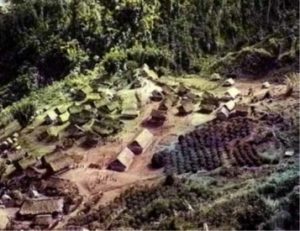 Momsalom is a large village in the lower part of what was the Naba census division north of Lae. The Naba extended northwards well up into the Saruwaged Range, with the more northern  villages at very high altitudes. The regular plantings are coffee trees.

This man is voting at the village of Dinagat in the Uruwa in the first House of Assembly elections held in 1964. At that time the people in this remote region still wore bark clothing and few spoke Pidgin. A translator was required.

They voted using a ‘whispered ballot’ system, whispering to me their preferred candidate. I would then mark their ballot paper and they put it in the box. 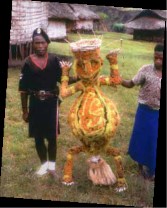 This is a tamboran, or spirit figure, from Dinagat in the Uruwa, c.1964. The policeman was Senior Constable Zowa, a firstclass policeman and a credit to the RPNGC. 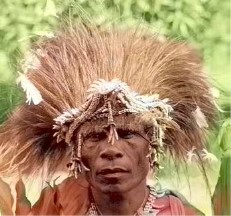 Constable Zowa in traditional dress for a ceremony. He came from Sio village on thenorth coast of the Morobe District, and was due his second 10-year star soon after these photos were taken in 1963 at the Kalalo Patrol Post.