The Rabaul & Montevideo Maru Society was  established in 2009 and integrated into the PNGAA  in 2013. The society encourages students and adults to explore the significance of WWII in the Papua New Guinea islands and what the start of the Pacific War in 1942 meant for Australia, including its worst maritime disaster—the sinking of Montevideo Maru on 1 July 1942. If you have news for the members, please contact Andrea Williams on admin@memorial.org.au

Twenty-eight members and friends attended NGVR/PNGVR’s 78th Anniversary Memorial Service to those who were lost when the MV Montevideo Maru was sunk by an American submarine, USS Sturgeon early morning of 1 July 1942. It was held at the Brisbane Cenotaph.

Specific mention was made of the thirty-six NGVR soldiers who perished on the Montevideo Maru and others who died in the aftermath of the Japanese invasion.  We understand the Brisbane service, due to the coronavirus situation, was the only service commemorating the men lost on the Montevideo Maru held in Australia this year.

After words of welcome by President Phil Ainsworth, keynote speaker Association Patron, Major General John Pearn, spoke of sacrifice, service and the debt owed to those who gave their lives.

Thanks to Gayle Thwaites

Hidden in the Trove Archives are a treasure of stories and personal accounts, of the men that made it home and their journey to escape the invading Japanese Army in Rabaul in 1942. This article was published in the Papua New Guinea Post-Courier newspaper:  Friday, 27 April 1973. This is an extract of the complete article:

On January 23, Lieutenant Alex Tolmer commanded a platoon at Raluana opposite Rabaul. He has since checked the Japanese records and reckons the Japanese force numbered 27,000 of whom 7000 attacked initially.

He withdrew his platoon to the upper airstrip when the position became hopeless. He and Lieutenant Geoff Donaldson (now chairman of Woodside-Burmah Oil NL) took their platoons north. After three days the party of 40 reached a plantation.

The Japanese were dropping surrender leaflets and sent a message asking them to give up; but next day Sgt Kevin Walls arrived with news of McCarthy and his escape plan. They headed for Pondo in a tiny pinnace where they met McCarthy and Captain ‘Pip’ Appel who had taken the coast area.

Finally, they reached Talasea from where the troops had to climb over the mountainous peninsula. It took them three days to go over 27 miles to Volupai. They were taken by boat to Iboki where the increasing number of sick and exhausted were cared for by Mrs Gladys Baker, wife of a plantation owner.

Alex Tolmer took a boat party down the north coast seeking more survivors as far as the western tip of New Britain. Then he followed the other survivors who had crossed 70 miles north from Iboki to Vitu Island where the 380-ton coastal trader Lakatoi lay.

When he arrived, she was being camouflaged, her bridge barricaded with bales of rubber, and her hold loaded with coconuts. About 214 people, including 140 Lark Force troops, sailed in her to Cairns.

Major John Akeroyd, regimental medical officer of the 2-22nd Battalion, had manhandled eight stretcher cases over the mountains to St Paul’s Mission near the north coast with two squads of bearers.  When he heard that 90 patients at Rabaul’s military hospital were without doctors he decided to be taken prisoner. He moved to the beach when the Japanese threatened to shell the mission if he didn’t give himself up; by the time they finally collected him he had 56 patients from troops moving to link up with McCarthy.

Eventually he set up hospital in the Rabaul POW camp in two sheds each designed for 20, but each holding 60.

Just before the Coral Sea battle, the Japanese Navy took over, and Major Akeroyd complained that the rations had been reduced to two meals of rice a day. At the first complaint the Japanese officer drew his sword and said: ‘I have no time for you and your sick.’

Confronted later with the Geneva Convention, he drew the sword again, pointed it menacingly at the Major and snapped: ‘International law is made by fools in time of peace. This is war.’

Lt Tolmer and Major Akeroyd were both from the 2/22nd Battalion and some of the lucky few that made it back to Australia.

The Australian Government leaflet (below), written in Pidgin/Tokpisin, to advise that the Pacific War would soon be over and Australians will be returning.

The following is the translation:

To all the Luluais, Tultuls, older people and those who worked for the government.

In New Britain we have taken Sag Sag and Kilinge. Our aircraft are continually bombing Rabaul so that the Japanese ships are no longer safe there and cannot stay there as they have previously done. In Kavieng also there is plenty of bombing – similar to Rabaul. You must not help Japanese or give food to them.  If you find an aircraft Captain of one of our soldiers, look after the well and hide them. If the Japanese try to talk you around, you must not listen. Very soon we will be coming back.

Note from the Government. 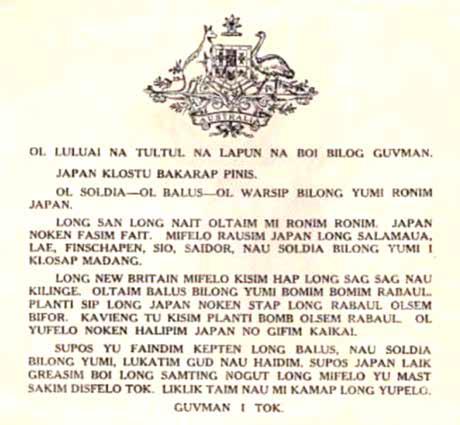 From the Kenneth England Collection

Either Side of Eleven Minutes on the Montevideo Maru: Decades Prior

Harry Adams, a Bristol-born engineer who landed in Australia prior to WWI, wanted to serve in the war. It wasn’t what he’d hoped for, he wanted to join the Royal Navy, but he ended up assisting the Australian Navy in their effort to set up wireless communications.  He did it on Nauru after starting in Bitapaka on New Guinea.  According to the words of Una Adams, the woman who Harry would marry in 1919:

‘The most important thing to do with the theatre of war is communications.’

The Day of Harry’s Marriage

Harry had proposed by letter and his soon-to-be wife, Una, had accepted. She came from Sydney to join him in PNG. It was 1919, and he had survived WWI. Harry had an engineering business going now, too. It went so well that he would eventually have to move it to the capital of Rabaul. Harry had a night with the bachelors prior to his day of days.

Una said that Harry was late meeting her when she arrived on the big day. But he was delivered to her by the men. They came in on a ‘bulamakau cart’, because cars were not available. But he did come in, and they were married about twenty-three years—until Harry died at sea on the Montevideo Maru, having been ordered to board by Japanese forces in Rabaul on 22 July 1942.  It’s 1 July 2020 Seventy-eight years since the Montevideo Maru was torpedoed by the submarine USS Sturgeon off the Philippine island of Luzon – they say it took eleven minutes for the ship to sink – and it’s possible that my great-grandfather suffered the entire eleven minutes before perishing! It is very possible that he was helpless and frightened.

The USS Sturgeon didn’t know there were prisoners-of-war and civilians on the Montevideo Maru.  Otherwise, they surely wouldn’t have sunk it.  In 2020, people are kneeling for nine minutes. They are realising how long nine minutes really is. Think about eleven minutes.

On 6 September 1945 the surrender  of all Japanese forces in New Guinea,  New Britain and the Solomons,  by Commander-in-Chief of the  Japanese Imperial Southeastern Army, General Hitoshi Imamura  and Vice-Admiral J Kusaka, Commander South East Area Fleet, was accepted by Lieutenant General  VAH Sturdee, General Officer Commanding First Army, on the aircraft carrier HMS Glory, located  off the coast at Rabaul.

Japanese signing the surrender on the HMS Glory, 6 September 1945

Rabaul had been an important strategic location for Japanese forces in the Pacific due to its proximity to New Guinea and the Japanese mandated Caroline Islands. In January 1942 Rabaul was the first Australian territory to be attacked by the Japanese.

The signatory to the surrender document, General Hitoshi Imamura, was detained at Rabaul before being tried in 1946 by the international Military Tribunal for the Far East set up by General Douglas MacArthur. Imamura was found guilty of committing war crimes in violation of the Geneva and Hague Conventions.  He was sentenced to ten years imprisonment and released in 1954.

To commemorate the sinking of the Montevideo Maru on this day seventy-eight years ago, the Australian War Memorial live streamed a tribute to Gunner Ivan Hatcher of Coastal Battery, Lark Force, on their YouTube channel.  Watch HERE