On 1 July 2022 the 80th Anniversary Commemorative Ceremony was held at the Stone of Remembrance at the Australian War Memorial in Canberra. 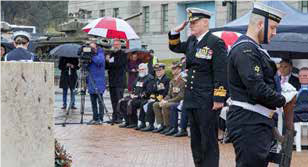 Although light rain fell this did not dampen the spirit of guests attending, many of whom had travelled from Victoria, South Australia, Western Australia, Queensland and NSW.

The 80th Anniversary Commemorative Address was provided by Colonel James Kidd DSM, CSM, representing the Chief of Army. Colonel Kidd had recently returned from three years as Defence Attaché at the Australian High Commission in Port Moresby. Colonel Kidd also had family living in PNG in earlier years. His tribute to those affected by those early days of WWII in the Pacific and his understanding of the significance of this event to the families involved was most appropriate and very warmly received. 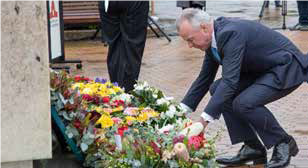 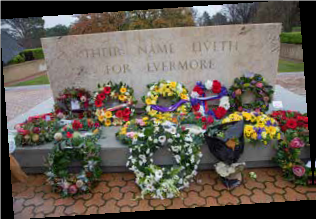 Prayers were led by Chaplain Grant Ludlow of the Royal Australian Navy, and vocalist, Sergeant Jennifer Cooke, with the Band of the Royal Military College, Duntroon, led the hymn and national anthems. The bugler was musician Ryan Koroknai.

Photographs taken by the AWM photographer are able to be viewed Here .

Held at the AWM on the evening of 1 July 2022, this service acknowledged the service of Corporal George William Spensley of the New Guinea Volunteer Rifles and the sinking of Montevideo Maru. Wreaths were laid by his daughter, Gillian Nikakis, and his descendants.

You can still watch this service online through the AWM website or HERE   https://www.youtube.com/watch?v=2zKxf7sIPl4 (note that there is a 7-minute introduction with the flame which can be fast forwarded).

The evening, held at Rydges Hotel, Canberra on 1 July 2022, began with mingling and cocktails before guests moved to the Forrest Suite for a 2-course dinner. Special guests included the PNG High Commissioner to Australia, His Excellency John Ma’o Kali and his wife, Mrs Kali, as well as Emeritus Professor David Horner AM, Dip Mil Stud, MA (Hons), PhD, FASSA, who gave the keynote address with the topic: ‘The Fall of Rabaul, the Montevideo Maru Tragedy, and the Defence of PNG and Australia’. Mr Horner is an emeritus professor in the Strategic and Defence Studies Centre at the Australian National University, where he was Professor of Australian Defence History for fifteen years. He is the author of 37 books and numerous articles on military history, strategy and defence. His books on command during the Kokoda battle and on Generals Blamey and Vasey deal particularly with the New Guinea Campaign. He has also written a book on the Pacific War. 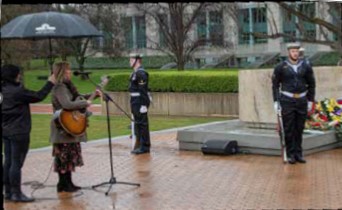 Kylie Adams-Collier kindly led the two national anthems for Australia and Papua New Guinea. We are also grateful to Kylie for taking the wonderful photos during the evening dinner.

Guests enjoyed hearing from His Excellency, Mr Kali, who spoke briefly at the start of the evening.

The Commemorative Address by David Horner AM covered the broader worldwide situation in the early years of WWII and how it affected the New Guinea islands and Australia. His address was outstanding. Numerous questions followed. The address will be available on the website HERE   www.montevideo-maru.org under 80th Anniversary. 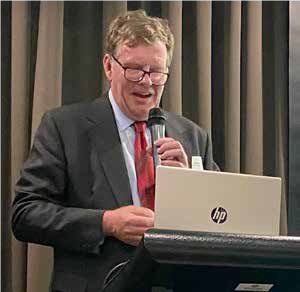 We were hoping that the new book Lost Women of Rabaul, by Rod Miller, published by Big Sky Publishing, would be available on the night, but we remembered Sr Berenice Twohill, Lorna Johnston née Whyte and their fellow prisoners, and the launch went ahead despite the book’s delay. Thank you for telling us a little about it, Rod. The book can be purchased through https://www.bigskypublishing.com.au/books/lost-women-of-rabaul/

Each table had a magnificent bouquet of flowers arranged by Elizabeth and Drina Thurston. Display tables were scattered around the room for guests to browse information related to the fall of the New Guinea Islands in early 1942. These included a magnificent album showcasing the historical 70th anniversary dedication of the Rabaul & Montevideo Maru Memorial at the Australian War Memorial, Canberra, and other albums and photos. Ross and Pat Johnson had brought several historical posters, including a tribute to the NGVR history, and we thank them for the special items of knowledge shared that evening. We thank Rebecca Mills for the wonderful displays shared too—and delighted that her grandad and instigator of the Ballarat Montevideo Maru Memorial, Dr Les Drew, could be present. There are so many angles to this history! Max Clarke brought along the original painting done by Christine Arnott and used in the first flyer that Keith Jackson and the Rabaul and Montevideo Maru Society had back in 2009!

Guests were also asked to bring along a small black and white photo of their relative or friend who was connected with Rabaul, Kavieng, Tol, the New Guinea Islands and the Montevideo Maru in 1942. Information written on the back was to include name of person, service number (if appropriate), connection with the New Guinea islands, if they escaped—how, and the connection with the person attending this event. A collage of photos of these people was made up at the dinner over a coloured canvas photo of Rabaul. It was a poignant collage and a wonderful innovative tribute, with thanks to Gayle Thwaites who has also greatly assisted in sharing this story through our social media.

It was intended to pepper the evening with various quiz questions related to the 1942 events, however, the busy evening meant that the quiz questions were placed on the tables to create discussion—with answers overleaf when needed. I thank Rod Miller, Patrick Bourke and Scott and Margaret Henderson for their contribution to this. We will gradually include general knowledge questions in Memorial News from time to time, with answers in the following edition, so keep watching this space!

Many people helped to make this a hugely successful evening and I thank them all. It was special to have two other founding members of the Rabaul and Montevideo Maru Society present—Elizabeth Thurston and Max Uechtritz. In addition to those mentioned there was the ‘behind the scenes’ support. To Phil Ainsworth, wonderful knowledge and support always, to Ally Martell—a huge thank you for the name tags and your assistance with media (a big relief!), Ross and Pat Johnson (‘what else can we do to help?’), to Bill Brown and Anthony Regan, and to committee members—Norma Dewick, Chris & Louise Pearsall, and Max & Helen Uechtritz—and to all who attended—thank you, all, for making it a tremendously memorable anniversary.