A special service will be held at the Australian War Memorial in Canberra on 1 July 2022. A dinner will also be hosted that evening. It is likely that numbers will be capped.

Full details of these events will be available soon on both the PNGAA website (www.pngaa.org) and the Rabaul & Montevideo Maru Group website (www.montevideo-maru.org/) as well as social media. Additionally, you can send email enquiries to admin@memorial.org.au, if you would like to be kept informed.

Further recognition of commemorative events was made when, on 23 January 2022, Radio 2GB’s Chris Smith interviewed Tony Webster, whose father, Corporal Hugh ‘Nipper’ Webster, was from the 2/22nd Battalion, Lark Force, and one of only six who survived the Tol Massacre. Tony told Chris and listeners the story of this significant historical event and the men who lost their lives. If you missed it and would like to listen to the podcast, you can do so at this address:

On 23 January 2022, Private Alfred William Hawkins NX68309, 19th Dental Unit, AIF, was remembered at the Last Post Service at the Australian War Memorial in Canberra, commemorating the eightieth anniversary of the fall of Rabaul and Kavieng. He died with the sinking of MS Montevideo Maru.

Alfred William Hawkins’s name will be projected onto the exterior of the Hall of Memory on:

The 22nd Battalion held a service at the Melbourne

Shrine of Remembrance, to commemorate the eightieth

anniversary of the invasion of Rabaul. The service was held on 16 January 2022, with a small group attending. Residents of Bendigo and surrounds gathered at the Bendigo RSL to listen to the live stream. On 4 February 2022 a small service was held at Bendigo RSL for those who died in the Tol and Waitavelo Massacres.

Lyn Skillern of Leongatha Historical Society gave an interesting talk on 23 January 2022. About 20–30 people attended, all of whom had connections in some way to the 2/22nd Lark Force men of Gippsland. Lyn is producing a book which we look forward to seeing in the next few months.

Information about Lark Force has now been included on the Virtual War Memorial Australia website at https://vwma.org.au. Put ‘Lark Force’ in to the search bar—there is excellent coverage.

On 1 July 2022 the names of the soldiers who died on MS Montevideo Maru will be in the Honour Roll section of the website.

Please write to your local newspapers, local schools, historical societies and RSL clubs telling them your connection with this eightieth anniversary and asking that they remember this extraordinary part of Australian history. 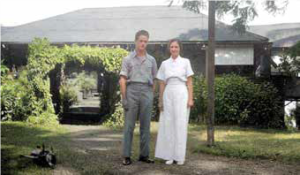 Still hidden in our National Archives are stories, reports and military records of the civilian evacuation and escape stories from Rabaul. One such record is a radio talk presented by ABC war correspondent, Gladys Baker—‘Evacuation of Rabaul’.

It is interesting to read the story from the perspective of a female civilian and how Mrs Baker assisted the Australians in their time of need, plus her personal escape journey to Brisbane.

If you would like to read more about Gladys’ story, please check out the PNGAA 75th Anniversary Commemorative Book Project, When the War Came:  New Guinea Islands 1942—personal stories of those who faced WWII on Australian territory and our greatest maritime disaster—the sinking of Montevideo Maru. Copies are available for purchase HERE or are available for viewing at the National Library of Australia or your State Library.
Gayle Thwaites

We are currently working on updating the Rabaul & Montevideo Maru Memorial website and this should be completed in March 2022. The new link will be:        www.montevideo-maru.org 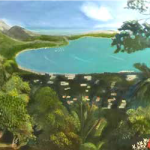 During lockdown Gillian has been busy painting and this one may be going into an exhibition Gillian is organising next June 2022. Gillian is also the author of the book, He’s Not Coming Home, which was initially published in 2005 and 2006 and re-published and printed 2016. It costs $25.00 (+ $7.00 postage), total $32.00 and is available by emailing Gillian Nikakis at gcniks@bigpond.net.au

In early 1942 the Pacific War came to the New Guinea Islands, and the Rabaul & Montevideo Maru Group has prepared research about soldiers and civilians who were there during the outbreak of hostilities, information on which is included below.

In this EIGHTIETH Anniversary year we suggest you contact your local secondary school to suggest they focus on some of the soldiers and civilians who were caught up in the Battle of Rabaul on what was Australian Mandated Territory. This is an appropriate project for Anzac Day, for 1 July and for Remembrance Day. A list, or a link to it, of those who perished on the Montevideo Maru can be supplied to any school interested in perhaps choosing their own person, if you do not have a relative or friend who was involved and who you can recommend. This project is not confined to those who perished on the Montevideo Maru.

Schools can also obtain a copy of the book, When the War Came: New Guinea Islands 1942, and use the group’s online education package     HERE

It includes all those men, women and children, in the New Guinea Islands at that time:

Many were Missing in Action due to no known graves. Many men who survived did not speak of their escape afterwards—they often had survivor’s guilt. Some families have not found out their relative escaped until after they passed away.

All these stories are significant. We have an opportunity to identify more of those involved and focus on what we can document about individual soldiers, civilians and their extended families.

Some stories will include reports from survivors—official and personal—some will include Red Cross reports on the fate of individual people.

All will contain the background to a civilian living there at that time, or the soldier’s details and, for many, reveal and share the generational memories of their families of those years.

The stories will aim to focus on relevant aspects to the individual soldiers and their families.

All these stories are different and combine to reflect a time and place important in our history.

Please contact us, and we will assist you to place your story or memories onto our new website. If you use material from our journal or website, please acknowledge the source as the Rabaul & Montevideo Maru Group, Papua New Guinea Association of Australia and any original author/custodian of material. Contact admin@memorial.org.au

The Butcher of Tol 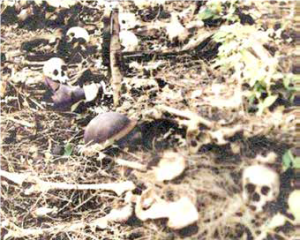 Remains of Australian soldiers after the massacre at Tol

It was late in 1946 and Colonel Masao Kusunose, was about to be tried by the Allies. The reason: at Tol Plantation on New Britain on 4 February 1942, he had authorised the bayoneting to death of 160 Australian prisoners. The prisoners were military and civilian escapees from the Japanese invasion of Rabaul. Tired, hungry and demoralised after nearly two weeks in the jungle, they had decided to surrender. A couple of men miraculously survived the slaughter, and escaped to tell the story.

Colonel Kusunose, fifty-eight, according to his peculiar code, was a man of honour. For him there was only one possible course—suicide. He could not commit hara-kiri because his samurai sword had been confiscated by the Allies. So, he decided to end his life by starvation and exposure in the sub-zero weather.

While Allied authorities hunted him, Kusunose went to the foot of Mount Fujiyama, to a deserted army barracks where he had soldiered as a youth. On 9 December 1946 he sat down facing the great mountain, which rose so steeply above him he had to bend his head back to see the splendour of the sunlit, snow-capped summit.

As he sat dying, Kusunose covered fifteen pages of his small black Japanese army notebooks with entries. On the last two days, he mentioned pains in his stomach and legs. His last entry was scrawled in red crayon: ‘Heaven will preserve Japan and the Emperor.’ Death came for him on 18 December 1946.

When an Allied search party reached the barracks at the foot of Fujiyama, they found an old straw sandal, a chopstick and a rusty can—Japanese, lacking Kusunose’s peculiar sense of honour, had long since looted everything else. The searchers also found his body, but it no longer faced the sacred mountain. Before he died, Kusunose had found the strength to turn away. The diary explained why: ‘It would be disrespectful if I died in the presence of revered Fuji.’ His left eye had been eaten away by rats.

The Australian War Memorial posted the following on Facebook on Christmas Day 2021.

During Christmas 1945 the men of 1st War Graves Unit were stationed at Tol Plantation in New Britain. The unit was involved in locating the remains of (and creating a cemetery for) the approximately 160 Australians massacred by the Japanese at the site on 4 February 1942.

In the midst of this cheerless task, Corporal Victor John Robertson, a signwriter from Western Australia, approached Captain David Keith Hanson with the idea of creating Christmas cards from the hard tack biscuits in their rations. Hanson readily agreed and Robertson created a biscuit card for each of his nine-unit members. Hanson sent his ‘card’ to his fiancée; to his amazement, it arrived in one piece.

The biscuit was donated to the Australian War Memorial in 1995 —still in its original packaging. 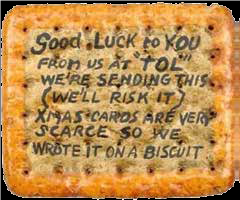 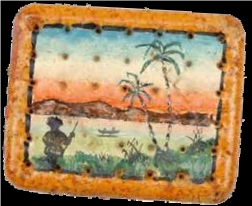