The Rabaul & Montevideo Maru Society was established in 2009 and integrated into the PNGAA
in 2013. The society encourages students and adults to explore the significance of WWII in the Papua New Guinea islands and what the start of the Pacific War in 1942 meant for Australia, including its worst maritime disaster—the sinking of Montevideo Maru on 1 July 1942. If you have news for the members, please contact Andrea Williams on admin@memorial.org.au

Good afternoon, ladies, gentlemen, boys and girls. My name is Albert Konie. We reflect on not just those who perished on the field of battle overseas, but also those who paid the supreme sacrifice in East New Britain. 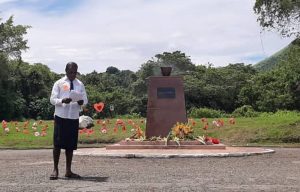 The thirty New Guineans and the first Australians to die in the Great War, at the battle for Bita Paka, the courageous members of Lark Force and those who went to their watery graves on board the Montevideo Maru, those who were massacred at Tol and Toleap and the brave Coastwatchers.

Not forgetting the residents of Rabaul who perished as a result of the occupation.

Our native brothers and sisters, the Fuzzy Wuzzy Angels, our local Chinese population, the prisoners of war from India, Australia, New Zealand, Great Britain and America and eleven-year-old Dickie Manson, executed on a charge of espionage.

We also remember the contribution of the Rabaul clergy and sisters imprisoned at Ramale and the civilian nurses who were captured and transported to Japan as prisoners of war for three and a half years.

In closing, we remember our own Rabaul Historical Society members who passed away this year, Melly Paivu, OBE, Anthony ‘Tony’ Stout from Lasul Plantation, Paul Bowen from Nonga, Daniel Gillam from Australia—Rest in Peace.

On Anzac Day honour the fallen, cheer the survivors,

care for the wounded and reach out to a friend.

Memorial for the Unknown 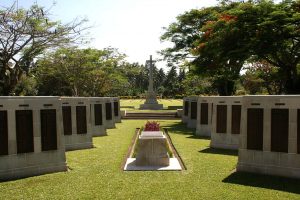 The Rabaul Memorial at Bita Paka War Cemetery, located approximately fifty kilometres south of Rabaul, commemorates over 1,200 members of the Australian Army (including personnel of the New Guinea and Papuan local forces and constabulary) and the Royal Australian Air Force, who lost their lives in New Britain and New Ireland in January and February 1942, and in New Britain from November 1944 to August 1945, and who have no known grave.

The memorial takes the form of an avenue of stone pylons leading from the entrance building of the cemetery to the Cross of Sacrifice. Bronze panels bearing the names are affixed to the faces of the pylons, which are silent reminders of the brutal Japanese occupation, and a central stone lectern at the commencement of the avenue carries a bronze plate with the following dedicatory inscription:

In this place are recorded the names of officers and men of the British Commonwealth of Nations who died during the 1939–1945 war in the New Britain area, on land,

at sea and in the air, but to whom the fortunes of war denied the known and honoured burial given to their comrades in death.

PNGAA’s education package encourages students and adults to explore the significance of WWII in the Papua New Guinea Islands. It complements the Australian History curriculum for secondary students and can be taught in one or two lessons. All information is available online through our Rabaul and Montevideo Maru website: https://www.memorial.org. au/Education/index.htm

In January 1942, after three weeks of air bombardment, Rabaul was attacked by the Japanese from the sea, and overwhelming odds soon broke the defence. It is estimated that against the original garrison of 1,400 the Japanese landed 17,000 men in the immediate vicinity of Rabaul. The defenders split into small groups and while some 400 managed to escape by sea a great number were killed or captured.

Of the latter, some 160 were murdered by the Japanese near Tol in February, whilst most of the remainder, plus some 200 civilians, were drowned when the ship, MS Montevideo Maru, whilst moving them to Hainan, was torpedoed and sunk on 1 July 1942—1,053 souls lost their lives in the tragedy.

Nevertheless, a number of the original garrison ran the gauntlet of the Japanese patrol and reached Australian territory in small vessels, overlooked when the Japanese commander sent destroyers steaming up and down the coast smashing all the boats to be found. Small forces on New Ireland, which lies near and north-north-east of New Britain, had been attacked and overwhelmed on 21 January 1942.

Thousands of troops participated in a series of operations against the Japanese throughout the country, including the Kokoda Trail Campaign from July to November 1942. However, it was not until November 1944 that New Britain was again the scene of fighting, when the 5th Australian Division landed at Jacquinot Bay, and the 11th Division at Wide Bay, and the Japanese were contained until the final surrender in August 1945.

Published to commemorate the 75th Anniversary of the Fall of Rabaul and the sinking of MS Montevideo Maru, Australia’s greatest maritime disaster, tells the stories of the civilian and military men, women and children caught in the lead-up and aftermath of the Japanese invasion and occupation of the New Guinea Islands in 1942

The book brings into focus the actions and characters of young men who left home to willingly serve their country, and then literally vanished off the face of the earth; of nurses and missionaries who volunteered to stay to help both the war effort and the local people; and of civilians—both men and women—caught at home on WWII’s Pacific front line.

Alongside are incredulous stories of escape and survival in an environment that threw every obstacle in their path.

Foreword by the Hon. Peter Garrett, AM and introductory piece by Max Uechtritz.

Cost: $60.00+$20.00 p&h within Australia. To purchase, please fill in the details in the Treasurer’s Corner Membership & Order Form at the back of this issue or order from our website: HERE