I knew that my father, the Reverend Thomas Simpson, had died in the Mandated Territory of New Guinea in World War II, but as a child, when I visited war memorials in Adelaide and Melbourne, I could not find his name. I concluded that he must have done something dishonourable that made him unworthy of formal recognition.

Many years later, I found out that ‘official’ war memorials were only for members of the Australian Armed Forces who had died in war. Civilians, Australians who served in allied armed forces (RAF, for example), merchant seamen, and charities (Red Cross, Salvation Army, for example) who were killed in the war were not eligible for formal recognition because they were not members of the Australian Armed Forces.

I also noticed that those on ‘official’ war memorials often ‘gave’ their lives as if it was a voluntary action. My father did not ‘give’ his life, it was ‘taken’ when he was beheaded on a beach in Kavieng. It is relevant to note that he and other Australian civilians were required by the Australian Government to remain in New Guinea after women and children were evacuated.

I concluded that this policy was discriminatory and I wrote to the Australian War Memorial in Canberra, asking why civilian war deaths were not publicly acknowledged. The formal reply explained that the policy was due to a lack of resources, inadequate, unreliable records of civilian deaths and the possible large numbers.

I wrote several more letters over a number of years and got similar replies. I realised that I did not have sufficient clout, so I wrote to Kim Beazley about the issue. I chose Mr Beazley because his uncle, Sid, had been a builder with the Methodist Church in Rabaul and had been killed in the war. A couple of weeks later, I received a letter from the Australian War Memorial acknowledging my most recent letter, and informing me that it had been decided that a Commemorative Roll on public display would be created to record the names of Australians who were killed in the war, but who were not members of the Australian Armed Forces.

There were, however, limitations on those who were eligible for inclusion on the Commemorative Roll. To be eligible an individual must have been killed during or as a result of conflict or operation the same as for the Roll of Honour, been born in Australia or had Australia as his or her last place of residence and a member of one of the following organisations or categories:

The Methodist Church was regarded as a ‘philanthropic organisation’ and my father was eligible for inclusion. However, in New Guinea for example, planters, business people, public servants and employees were not eligible. Again, it seems that some deaths are more worthy than others. This discrimination is disappointing but the Commemorative Roll is better than nothing.

Official statistics suggest that 900 Australian civilians were killed in World War II. It seems reasonable to assume that many of these were in New Guinea. It is important that as many as possible of those deaths should be recognised and included in the Commemorative Roll. If you believe that you know somebody who is eligible for inclusion it is worth checking with the Australian War Memorial to see if they are already there and, if they are not, to get them added.

The Commemorative Roll is located at the top of the staircase in the remembrance section of the Memorial. Attendants at the information desk are happy to open the roll at any page requested by the public. 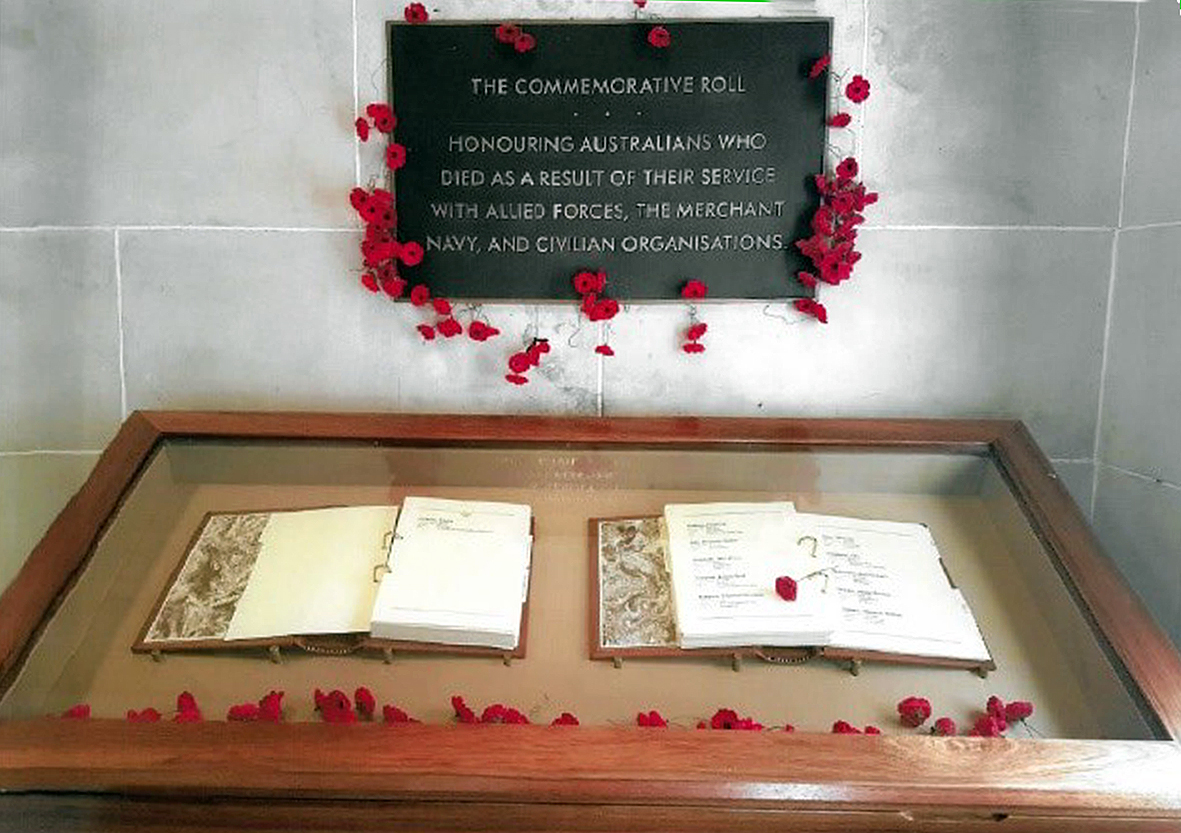