‘I am really into a routine … I think they are rather amazed when I get a letter typed with no mistakes in quarter of an hour instead of half an hour.’ ‘It was an old Royal typewriter—not even an electric one,’ recalled Kate when I interviewed her in May 2019.

Our parents, with youngest sister, Louise, moved from Tasmania to Port Moresby in April 1971. Kate followed them and took up a job at Burns Philp—the 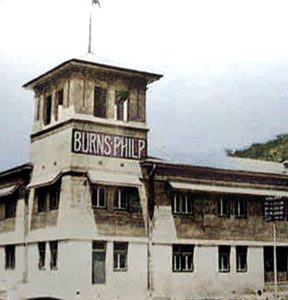 famous Island trading firm. ‘The firm was known as Beeps, or BPs,’ Kate said, ‘and I was working as an invoice clerk in the Plantation and Trade Department.

‘For many years the famous Burns Philp Store, built in 1912, was the biggest and most substantial building in Port Moresby. Its handsome, four-storey tower on the corner remains, despite much recent high-rise building, one of Port Moresby’s landmarks.’

The company was once a major Australian shipping line and merchant that operated in the South Pacific. It went out of existence in 2006.

Kate’s letters to me were a rich resource and a valuable reference for our interview. ‘I am typing invoices,’ she wrote. ‘The job isn’t too bad. When I leave, I will be a qualified invoice clerk—heavens, I seem to be doing everything.’

Usually an entry-level position, the invoice clerk’s job was to receive and process orders. ‘Some of them were ten pages long and I had to decipher the handwriting as well,’ recollected Kate. ‘The main responsibility was to make sure the invoices were accurate and that bills were paid on time. This would necessitate entering information about customer purchases, ensuring that the prices and amount due were correct and sending the invoice to the customer.’ 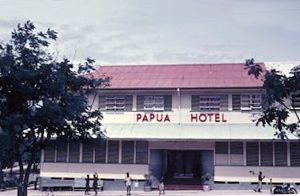 The Papua Hotel was known locally as The Pap or The Top Pub. Its restaurant served, amongst other 1970s delicacies, Lobster Thermidor, Bombe Alaska and French Onion Soup

Kate recalled, ‘The orders would come in from the estates—copra, coffee or tea plantations which were out on the islands—Bougainville, New Ireland or New Britain. The orders also came from areas on the mainland that were not easy to get to.’ Copra was then, and remains today, a significant agriculture cash crop in PNG. Burns Philp owned copra, as well as other plantations.

Once the order had been received, the items would be categorised. Often the lists of goods would be jumbled up. ‘Food items were mixed in with whatever else was wanted, such as spades, or tomahawks,’ Kate reminisced. She typed the lists on different sheets of paper and sent the lists to whichever department organised those items.

‘Some of the items on the lists were strange,’ she told me. ‘For example, fifty mantles: a mantle,* I found out, is part of a hurricane lamp. Not all the plantations would have electricity, and some may not even have had a generator.’

Locals, as well as a manager, were employed on the plantations. The orders would often include food items for the workers: ‘50 cartons of bully beef were a typical order, and tins of mackerel were very popular … and they would be 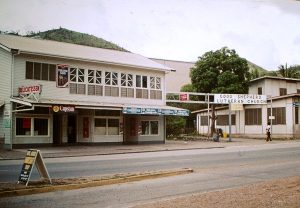 Good Shepherd Lutheran Church, Koki. Note the advertisements for Paradise Gold beer, Capstan and Cambridge cigarettes. Koki was a popular, meeting place of many of the local residents

shipped back to the plantation on a barge,’ said Kate.

‘If I needed clarification on an order,’ recalled Kate, ‘I would ring someone at the plantation or, more often, I would ask someone on the floor.’ Her response to my asking if she ever met any of the plantation managers or owners was, ‘No. If I noticed someone that I didn’t know, I would ask ‘who is that’ and they would say, “That’s the manager of x”,’ Kate added rather disparagingly, ‘I thought it would have been nice to have been introduced but maybe that wasn’t what one did!’

Kate was the only invoice clerk but she trained a local girl, Daisy, who took on the job when she left. ‘She was a bit older than me—we would have chatted, [but] like a lot of the locals she was very shy. Even the men were,’ Kate added.

‘We get 168 dollars a month,’ wrote Kate. ‘We start at eight in the morning and finish at 4.30 in the afternoon and have an hour for lunch. Occasionally, I would walk the 400 metres home for lunch,’ said Kate, ‘We had a staff canteen though, and could get a discount at the Beeps supermarket [where] I would buy my lunch—a green apple 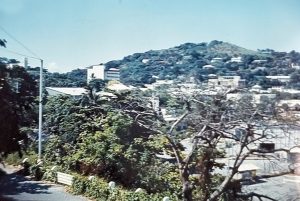 and processed European cheese.’ She went on to say, ‘You didn’t buy apples by the variety, it was either green apples or red apples.’ This must have seemed most unusual to a family from Tasmania who knew their Red Delicious from their Granny Smiths!

Kate worked as an invoice clerk for about seven months and left Port Moresby to travel and work in London. Although short lived, her employment at Beeps was ‘fascinating’ and she added, ‘I learnt so much about other parts of PNG.’ Kate agreed that in the 1970s ‘Port Moresby is a very pleasant and extraordinarily interesting place in which to live.’ u

* Editor’s Note: More likely for a Tilley or Coleman lamp.