In June 2014 a group of enthusiasts headed by Professor Glenn Summerhayes of Otago University did two archaeological digs in the Madang area of Papua New Guinea. These were in Malmal Village, located some twelve kilometres north of Madang, and Bilbil Island which is ten kilometres to the south. There were seven of us in the team, including Professor Glenn Summerhayes, Dylan Gaffney, an MA student, Affrica Cook from Oxford University, Teppsy Beni, a fourth-year student from UPNG, Herman Mandui, Deputy Director of the National Museum, Dr Judith Field of the University of New South Wales and myself.
IN APPLYING FOR THE GRANT, Professor Summerhayes noted that, ‘This project aims to shed light on the nature of human occupation along a long-neglected area of PNG—its north-east coast—and also to determine the age of the traditional trade network along this coastline, as Bilbil is strategically located to assess prehistoric movements of peoples and ideas from west to east. As we know little of this movement or of subsequent occupation along this part of New Guinea’s coastline, archaeological research here is a priority.’ 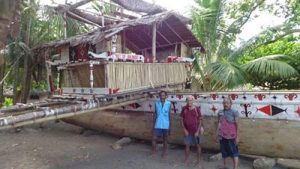 My input into the field trip was to liaise with the local people and provide background information from my own studies of the area. As I had lived in Madang through all of the 1970s, I was able to renew some old acquaintances. While the old informants I had known were now deceased, it was sad to hear that even some of the next generation had also died. We heard that the life expectancy for men in PNG is only fifty-five and for women fifty-seven years. The people I had most to do with in June 2014 were my own children’s friends from the 1970s. For example, my old Bilbil informant, Maia Awak, had died in 1979 but since then his daughter, Sibol, and husband, Masil, had also died. Their daughter, Sima, friend of my Joanna, now lives on Kranket Island with husband, Desmond Gadi, who is an electrician. 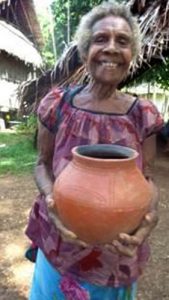 #2: Bilbil Village and Island, will be featured in the December edition of Una Voce