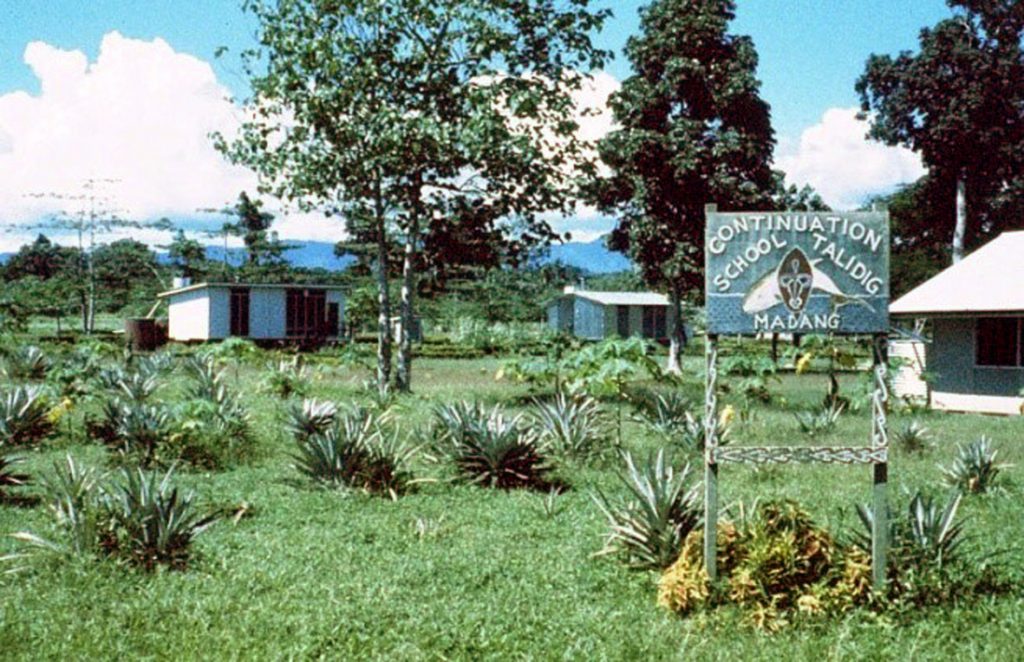 After six months at Malahang Teachers’ College in Rabaul, in 1961 I was posted to Talidig Continuation School. Talidig was a boarding school in the Madang District and it catered for students aged from eleven to eighteen years of age. The school was on the coast about fifty km north of Madang and had the Del River as one of its boundaries. There were four classes of about thirty boys each. There were no villages close to the school so all the pupils were from other villages all over the Madang District. I was one of a staff of four, with the head teacher having been there for five years.

Three weeks after I arrived at Talidig, nearly all the pupils and the head teacher left for the six-weeks’ holidays, leaving just fifteen boys, a Papuan teacher and his family and me in residence. I had no transport so I was more or less on my own. There were two villages about a mile on either side of the school, but in 1962 none of their children attended a government school. 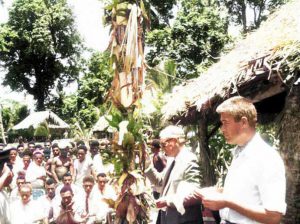 For the first time in my life I found myself living on my own and fending for myself; before leaving for TPNG I had lived with my parents. My house was a single person’s quarters and was basic. It was an unlined, fibro, six metre by four metre rectangular box with a metal roof. There was a small dining table and two chairs, two folding aluminium chairs, a kerosene refrigerator, a wood fuel stove, kitchen sink and cupboard. The bedroom contained a single bed and a shower and sink recess. There was a cupboard separating the bedroom from the living room; the bedroom side was for clothes and the living room side was for food and kitchen gear. A small rear porch held two concrete laundry tubs. The water supply was from two tanks at ground level with a wall mounted hand pump to lift water to a small tank on the roof. This tank fed the shower room, laundry tubs and kitchen sink. Only cold showers could be had.

The laundry consisted of a freestanding wood-fired copper in the yard behind the house. There was a pit toilet made of bush material. Another pit about one metre deep and wide and about two metres long—the rubbish dump—finished off my housing. Lighting at night was by kerosene pressure lamp. I had to buy this as there was no government issue. I had also purchased a twin-burner kerosene stove in Rabaul as well as a short-wave radio—my only form of entertainment. Radio Biak from Dutch New Guinea, Radio Australia and the ABC in Port Moresby were the main stations available. 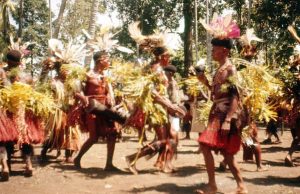 My duties, besides teaching a Standard 5 class, included supervising working bees before and after school and inspection of the dormitories, issue of rations, sick parade, cooking of meals and turning lights out at nine each night.

Every second Friday afternoon a Land Rover and driver would come to pick me up and take me to town to purchase food. This situation lasted for a few months until a trade store opened about two miles away on the town side of the school. We then placed our order with the storekeeper, who passed it on to the store owner, who then did our shopping for us and delivered it to the school.

After fifty-eight years I do not remember in detail what I ate. I do remember that soft drinks came from America, tinned ham from Canada, tinned fruit was Del Monte brand from USA. Tinned white peaches, which I really liked, came from Japan. Frozen meat and Arnott’s biscuits came from Australia. Cigarettes were English, beer was Australian. One English brand whose products I enjoyed were the Sun Pat peanuts in small cans, and their potato chips, which came as dehydrated flakes in cans also. To prepare the chips one had to heat oil in a pan and then drop in the flakes. Instantly they would swell to full size like the Australian chips I remembered. 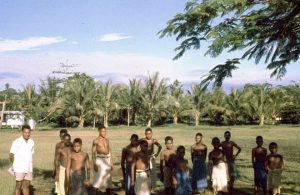 By March 1962 I had purchased a motor scooter. This meant I was no longer housebound, although, until I got myself a licence, I did not venture far from the school. Huxley’s plantation and Rempi swimming hole one way and the Road Master’s Camp the other way were my limits. By Anzac Day I must have obtained one as I was in town that day and witnessed the local Catholic priest tossing the pennies at the Two Up game.

A discussion must have taken place in the Madang Club another time about who was the best marble player growing up, because the next thing we knew a group of men was outside the club playing marbles.

In the midyear school holidays, we all came to town for a week to attend refresher courses. Our accommodation was paid for at the Madang Hotel. On a few other occasions, when I was off duty and I came to town, I would usually find a spare bed at the Commonwealth Bank Mess. Otherwise, I stayed at the house of a chap I had known from the Meadowbank Boy Scouts. He was a Co-Op officer and would not always be in residence. On these visits I would catch up with other teachers and we spent our days drinking and our nights at the movies. If the new District Education Officer joined us, we would all end up drinking gin and tonic. All drinks were twenty-five cents each in those days, so on Sunday afternoon I would return to Talidig with a very sore head. 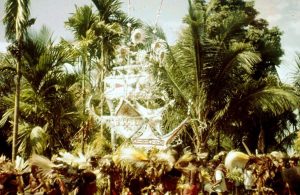 The Royal Commission on the use of alcohol by Papua New Guineans arrived in Madang in the August/September 1962 school holidays when we were all staying in the Madang Hotel for the refresher course. It was here that I first met Bill White, another teacher, who was being posted to Karkar Island. One night, while having dinner at the hotel, two very attractive women were in the dining room also; they were secretaries attached to the commission. Bill said, ‘Let’s ask them out’ and so he called the waiter over and asked him for a pencil and paper. He then wrote a little ditty that went like this, ‘Our names are Bill & Len, we are two lonely men and we would like to meet you.’

Their first reaction was to say NO, but Bill was not deterred and whatever excuse they sent back, including that they had to type up the day’s meeting minutes, did not stop him. He approached the judge, who gave them the OK to meet us. With no further obstacles, we took them for a moonlight stroll from the hotel to the Coastwatchers Monument and back. It was nice to have a couple of girls to talk to. I had been in PNG for about sixteen months and they were the first women of about my own age that I had spoken with in all that time. 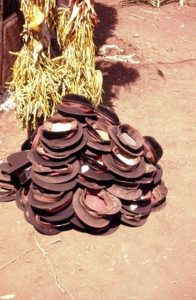 Living fifty km from town and only getting into it occasionally, it was almost impossible to meet or have a relationship with a member of the opposite sex. I had had a girlfriend in Sydney and we corresponded regularly for most of 1961, but she
and her parents had moved to Melbourne about the same time as I came to PNG.

She had made new friends and, while I didn’t receive a ‘Dear John’ letter, I understood when her letters became fewer and fewer and then stopped. So that night walk with the two secretaries was a nice interlude. They flew out the next day for the next town.

My only regular contact with women in 1961/62 was with a Mrs Huckley, who was the same age as my mother and the head teacher’s wife, who would say a few words if she was taking her baby for a walk after school hours.

She and her husband did not encourage close social intercourse. I think in the year I was there, I had dinner with them once, when they invited some of the Catholic brothers or priests from Rempi to dinner.

The only other women I saw were those who worked in Burns Philps’ or Carpenters’ stores and in the Education Office, if I was in town in business hours 8.00 am to 4.06 pm, which wasn’t often, and they were all either married or spoken for.

Of all the major towns I visited during my time in PNG, I think Madang is the most picturesque. My favourite place to stand and enjoy the view was on a small bridge between the Madang Club and the hotel where you could look up the inner passage between the mainland and a string of islands and see Karkar Island. faintly in the distance. I called it my ‘Bali Ha’i’ place, like the one in the movie, South Pacific. 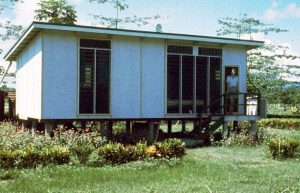 The school was in an area which was part of a proposed Sumgilbar Local Government area, and the new Sumgilbar Local Government Council was to meet for the first time in March 1962. This was an historical event so we transported the whole school to the site of the new council and its ceremonial inauguration. This was about ten miles further up the North Road near Dylop Plantation.

This occasion gave me an insight into how the villagers and the Administration had interacted with each other until this time. The Administration had been trying for some time to get the people in the area to co-operate in forming a local government council as the first step on the road to self-govern-ment and independence. Until this day each village had been run by a luluai (a headman or chief) and his assistant known as a tultul. These appointments had been made and confirmed by the Administration. On this day all the luluais and tultuls would step down and be replaced by the newly elected local government councillors. As part of the ceremony they would all hand in their previous badges of office, which were their head caps. The new badge of office showed that they were now elected by their villagers, instead of being appointed by the Administration.

All the dignitaries were there: the Administrator, Sir Donald Cleland and his wife, the heads of the various government departments, the Catholic Bishop for the Madang District, the heads of the Lutheran and Seventh-Day Adventist Churches, all the school children from government and mission schools and their teachers along with many other interested parties. The day started with the addresses of welcome followed by the change of badge ceremony. This was followed by opening speeches by Sir Donald and the new Head Councillor. Speeches by the administration people were in English and were translated for the villagers into Pidgin by a patrol officer and vice versa, when the councillors responded. After the formal ceremony we were treated to a mass of entertainment in the form of play acting and sing-sings performed by each village group. They were dressed in some of the most elaborate costume hats I saw while in PNG.

I made a tape recording of the opening ceremony and the sing-sings. I can still listen to these to this day and if anybody knows how to save and add these recordings to Facebook, I would be happy to share them. I had the tape recordings put on to two CDs about twelve years ago, so I can play them on my computer.