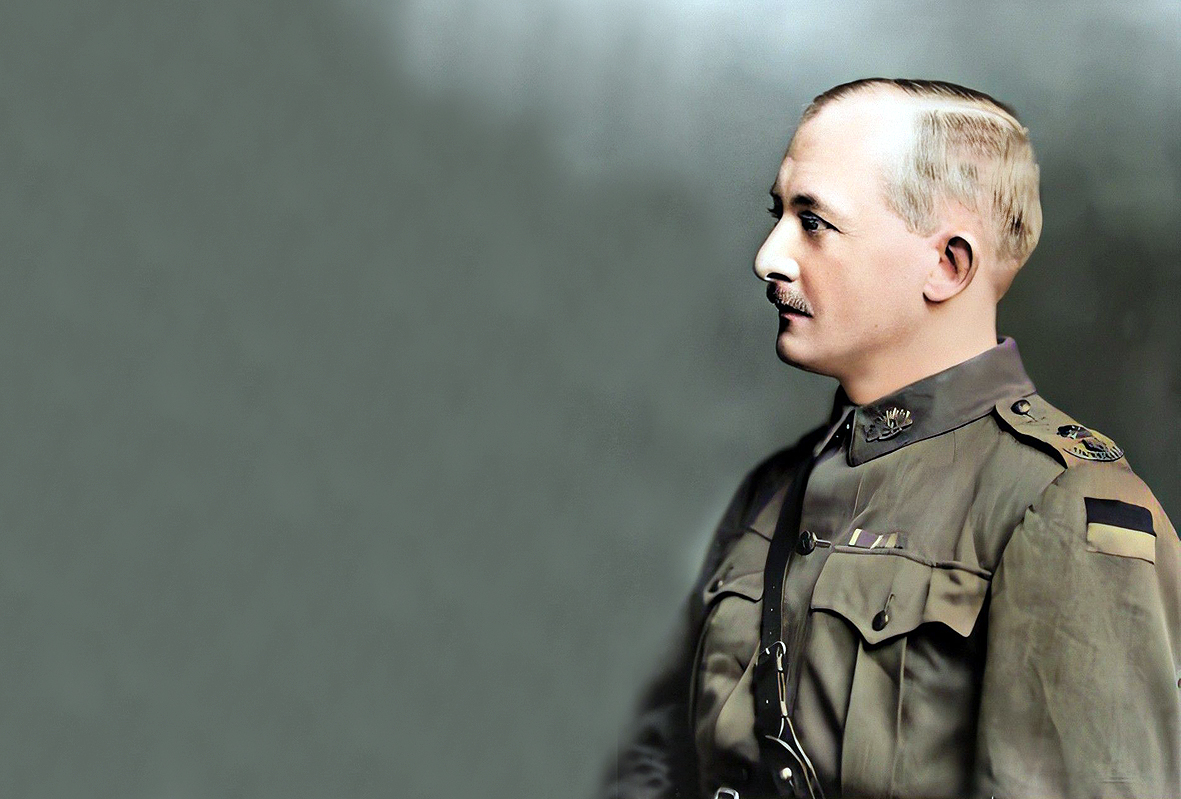 Maurice Wilder-Neligan had a meteoric rise through the ranks from private at Gallipoli to lieutenant-colonel on the Western Front and, when the war ended, he was the second- most decorated soldier in the AIF.

Maurice returned to Australia on the Takada arriving in Brisbane on 11 September 1919 and was discharged on 12 October that year. He gave the reason for his discharge as ‘headaches’. His medical report stated:

These were the result of ‘a gunshot wound to head at Fleurbaix, large loss of bone to right eye socket, several operations on head—was completely paralysed for about six months, now walks normally, only suffers from occasional headaches, other wounds all quite healed causing no disability.

After a brief attempt to return to civilian life he enlisted in the Australian Naval and Military Expeditionary Force (AN&MEF) on 26 March 1920. He was appointed lieutenant and attached to the Rabaul garrison. Maurice returned to Brisbane in April 1920 to receive his French Croix de Guerre in an investiture conducted by Sir William Birdwood on 1 May. He returned to Rabaul as Temporary Deputy District Officer, Rabaul.

When the military government ended he transferred to the civil administration becoming the District Officer at Talasea, New Britain with the honorary rank of lieutenant-colonel. He was vested with police and magisterial powers and travelled extensively in the district, completing a well- documented patrol in July 1920. In the report he wrote of one of his favourite villages, Kerapi:

One of the best villages I have seen. The old chief is anti-whiteman, his son Galu has now been created chief and is a fine stamp of man. An excellent native plantation, well kept. Cocoanuts [sic] have all suffered from paga and are all dead. Good water, fair tracks. They have recently suffered from an epidemic which seems like measles, it decimated the young and very old.

The Administrator of New Guinea said of Neligan’s patrol report:

This report is one of the best and is certainly the most complete it has been my pleasure to receive during the period of my service and I think it will be of interest to the Minister and any bodies who are interested in native races.

Neligan met up with Shipmann on one of his furloughs to Sydney in December 1921 to discuss the financial dealings. Neligan attempted to pay back money owing to the Germans, but his cheques were dishonoured by the bank. Neligan visited a close friend, Dr SV Appleyard, in an attempt to gain some credit. Appleyard had been attached to the 10th Battallion AIF as medical officer at the time of the bloody battle of Polygon Wood and they had become close friends.

Early in January 1923 he was called to Rabaul by the Administrator to answer allegations of financial mispractice made by Shipmann, as well as his other debts in Australia. In an attempt to clear his name Neligan resigned his position in the Administration and set out for Rabaul by sea in the MS Manum with his servants, Yami and Kubrik, and Patrol Officer Cunningham. He went ashore to stay at the village of Ekerapi on 6 January 1923. The next day he directed his Chinese cook to take his surplus belongings to Rabaul as he intended to stay at Ekerapi for a few days. The Manum departed for Rabaul with Cunningham and his police on 7 January.

In the early hours of 10 January Neligan called Yami to his room to clean up a mess as he had been violently ill. When they went to wake him later in the morning they found him dead, aged forty-one.

The Ekerapi people were instructed to prepare a canoe on which the body was to be conveyed west to the government rest station at Talasea but, due to a storm, the journey took twenty-six hours.

An external examination was made by the medical assistant at the station, Francis John Giles, who found that decomposition had already set in but there were no signs of foul play. The next day a coronial inquest was held by the Acting District Officer at Talasea, who again found that his death was from natural causes. There was a widely held assumption that he had poisoned himself as his actions would have brought disgrace to himself and his family. His war-related head injuries may have exacerbated his erratic behaviour which had been evident in recent months.

Neligan was not normally in financial want as he received money from England from time to time, although he had begun to hear of peculiarities of Neligan’s behaviour in New Guinea, but he put that down to the after-effects of the head wound.

Maurice Wilder-Neligan was buried on the hillside overlooking the sea behind Talasea Government Station on 12 January 1923. His funeral was conducted by the District Officer Edward Taylor and was attended by all residents and officials in the vicinity, who, with the native police, accorded him the fullest honours possible. Some accounts say he is buried on nearby Gurua Island but that is incorrect.

By late 1923 attempts to resolve Neligan’s financial issues had gone all the way to the Prime Minister’s Department. The head of the department made the comment: 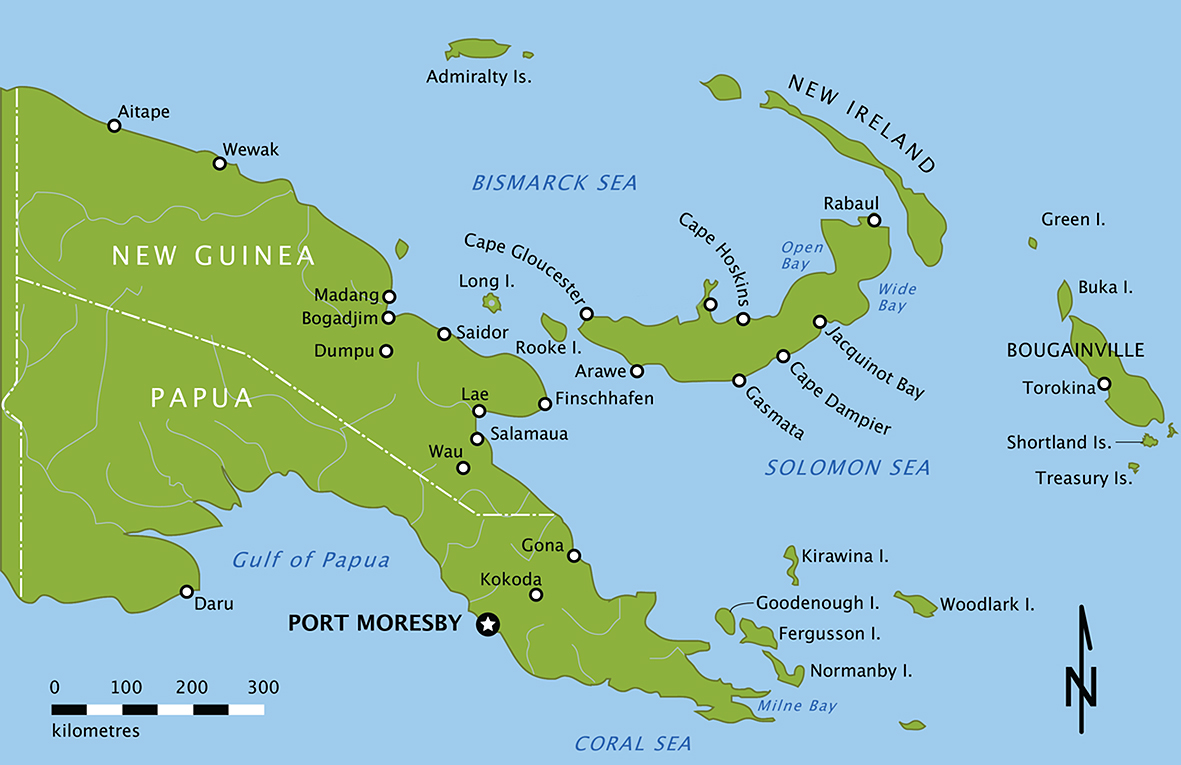 Map of the area

There is a strong assumption that Neligan committed suicide by taking poison, and we should let the matter drop due to his military record.

In November 1923, the Crown Solicitor recommended:

There is not enough evidence to warrant the institution of civil proceedings against Neligan’s estate to recover the amount that is alleged he obtained from Shipmann and Raettig.

A request was made for his body to be reinterred in the AIF Cemetery, West Terrace Adelaide—the home city of the 10th Battalion which he commanded in the final stages of the war. But, in accordance with his wife’s wishes, he remained at Talasea and a memorial stone was placed on his grave in 1926. 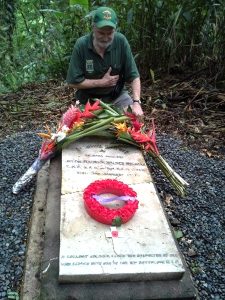 Inscription on the gravestone: In loving memory of my dear husband Lt Colonel Maurice Wilder-Neligan CMG, DSO and Bar, DCM, Croix-de-Guerre. Who passed away on 10th January 1923—A gallant Soldier, loved and respected by all who served with him in 9th Battalion AIF

The expatriate community and locals continued to hold Anzac Day services at his grave for many years, but it eventually fell into disrepair and was forgotten. The surrounding area is actively volcanic and it was also within Japanese occupied territory during WWII, which compounded the problem.

Miles Farmer, OAM, the son of a soldier who had served with Neligan, arranged to visit the grave for Anzac Day 2015. Peter Humphreys informed me that Ashley Barnes from Kimbe, PNG, spearheaded the location and initial clean-up of the site and the purchase of a brass plaque which now hangs in the San Remo Club at Kimbe, West New Britain.

In 2019 the Office of Australian War Graves (OAWG) became involved and late in September 2019, was able to have Neligan’s death accepted as war-related, which entitles him to an official ‘post- war’ commemoration placed at his grave site or a plaque in an Australian Garden of Remembrance.

The OAWG Manager PNG and Cheyne Benjamin visited the site in December 2019 and found that it was again very overgrown and a large tree had fallen and smashed the gravestone. The site was re-cleared by local landowners.

They revisited the grave site in February 2020 and Cheyne was tasked to find a local builder who could construct a new grave as the old grave was beyond repair, and to confirm if the local landowners would be interested in maintaining the grave and its immediate surrounds. As the headstone is of significant historical value, OAWG is going to establish if it could be reused in some way.

In early 2020 Covid-19 was beginning to be a problem in PNG and Australia and the OAWG Manager returned to Australia to operate out of his Canberra office. This put all plans on hold until he is able to return to PNG when he hopes to resume 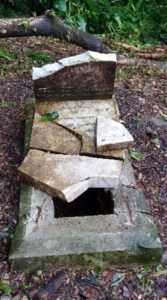 discussions and planning with Cheyne to restore Maurice Neligan-Wilder’s grave.