May I, firstly, commend and congratulate you on the wonderful content in the last issue of our journal which just seems to get better and better.

However, I think that it is long overdue for a name change which means something to our members.  The current name derives from the pre-war superannuation funds of the Australian Territory of Papua and of the League of Nations Australian Mandated Territory of New Guinea (from about 5.5.1921), which before WW2, were quite separate as was the governance of both territories.

As I understand it, post WW2, there was a move from the  pre-war officers who survived and joined the post-war provisional administration,  for their superannuation funds to be joined together under the Commonwealth of Australia as a single superannuation fund as indeed the governance of both territories then was  although, for some years, the former Territory of New Guinea (TNG) became a United Nations Trust Territory. (The United Nations periodically used to inspect New Guinea but not Papua).

Post-war, from 1945 until c.1952, the police force was known as the Royal Papuan Constabulary and the New Guinea Police Force.

Time marches on and there is now the great need to change the name of our wonderful journal as the former title (lit. “with one voice”) now means absolutely nothing to most members.  I have observed from recent issues of our journal, a thrust to move toward the future of Papua New Guinea our nearest neighbour rather than the past, while combining both eras.   I raised this subject 2-3 years ago suggesting that it be discussed at the then next AGM but nothing resulted.

I would like to ‘throw my hat’ into the ring.  I suggest that in future the journal be known as

As we know, PNGAA subscriptions   end on 31 December each year and   therefore it is membership renewal   time! Thought it would be nice to   share some of the lovely emails   received by the committee, which   make the hours of voluntary work   worthwhile:

I tried to renew my membership   via the website link online. It failed   over six times so I gave up and did a   direct deposit. My payment was for   the $45 print-copy magazine.

Sorry you had difficulties. If you want to go to the renewal page on   the website, click on the link:   https://pngaa.org/membershiprenewal-for-members-wanting-hardcopy-of-the-una-voce/

Alternatively, you can make   an electronic payment to our bank account which is as follows:

The subscription rate for 2020 is $45.00 (for Australia), or you can make a payment for two years for $90.00. Further details are available in the Treasurer’s Corner. If you make an electronic payment please email treasurer@pngaa.net so we can look out for it.

The March 2019 edition of this journal mentioned the Star Mountains Patrol conducted by my father, ADO Jim Kent, from 22 September to 22 December 1954. This was followed by an article in the June 2019 edition penned by Chips Mackellar, ‘The Best Beer I Ever Tasted’, that describes the resupply of the patrol by airdrop from a Catalina flying boat.

A most successful outcome. The significance of the air drop to the patrol and of the ten per cent loss is expanded on in his introduction to the report itself. The patrol comprised my father, Patrol Officer David Jacobs and sixty-three Papua New Guineans, police and carriers. He explains that the patrol could only carry provisions for three weeks. Strategies to extend time in the field included airdrops, relaying of stores, purchase of native foodstuffs, or a combination of these strategies.

Unfortunately, the ten per cent lost was made up of rice: … some of the bags floated and sailed right beyond the dropping area and hitting the tall timber burst showering rice like confetti …

Further, the supply of native foodstuffs was less than anticipated and a second airdrop was not approved. On 14 November, with four weeks to go and patrolling in uninhabited country, only 400 lbs of rice remained. Capability to continue the patrol was now severely limited. My father resolved to continue until the first bag of rice was broached, at which time the patrol would commence its return journey.

I would like to congratulate the journal editorial team on the presentation and content of recent editions. Seeing Bob Gotts and his butterfly collection mentioned in the September and December editions triggered a tsunami of memories of the time Wilma and I were in PNG from 1962 to 1967. My first job was with the Department of Information and Extension Services (DIES) film unit and, subsequently, we formed our own company, Films New Guinea. One of the films we produced was a documentary, The Miniatures Magnificent, for the Department of Posts and Telegraphs to promote their first decimal currency stamp issue which featured butterflies.

It won a silver medal in the 1966 International Film & TV Festival of New York. During production I met Bob Gotts, Barry Lord and others who were involved with lepidoptera and philately.

The more I thought of those days, the more memories of those we met during those years began to surface. If time permits, I will try to write something of those days leading up to independence and list those friends and colleagues who made our short stay in PNG most rewarding.

During my time in Moresby I was fortunate to meet a respected journalist who lived there pre-war and later attended media conferences where MacArthur demanded all war correspondents use the name ‘Trail’ instead of ‘Track’ to describe the route—the term previously used by the Aussie Diggers. Since then I have researched the matter and taken issue with the Australian War Memorial for its exclusive use of the term ‘Trail’ in its display. I am pleased to note that most Aussies have realised the correct name for the route and are rejecting the substituted American term ‘Trail’. It was interesting to note that two adjoining articles about the Kokoda Track in the December edition where both authors supported the use of the foreign terminology—‘Trail’. If they or other PNGAA members would like a detailed account of the facts supporting my stance, I would be happy to email them a copy of my evidence. Then they can make an informed decision on their preference.

How a Pork Chop Changed My Life

Giving the talk on the ABC in PNG to the Adelaide PNGAA lunch made me think about the almost bizarre circumstances which predicated my joining the ABC, and I thought the story may be of interest.

In the kiap’s residence at Kokoda, having received my weekly incoming hessian-bagged air freighted order of freezer goods, I unwrapped one large soggy newspaper-wrapped consignment of pork chops and threw the wrappings on to the floor.

When I picked them up I noticed a very small advertisement highlighting the fact that the ABC was looking for someone wishing to be appointed as the Program Director of the ABC’s newly-established indigenous broadcasting service at 9PA Port Moresby. This sparked a conversation with my wife, Shirley, about the possibility that this might well represent a very attractive alternative career  prospect. I submitted a casually written letter, expressing interest, with a promise to follow up with a detailed application were one to be called for. Weeks passed when out of the blue we received a radio message of just four words: Library arriving plane Tuesday. We were nonplussed—how could a library come to Kokoda?—We hadn’t ordered one!

On Tuesday the Patair plane landed; out stepped a very distinguished elderly gentleman who came over to me on the tarmac and said in a very lofty tone, ‘Ah, then, you must be Taylor!’ I responded somewhat laconically, ‘Well yeah—I am the kiap around these parts.’

The stranger replied, ‘I am Harold Sibrary—the ABC’s General Manager in PNG and I have come to interview you.’ Clearly the ‘library’ bit was a mis-translation in on-air voice radio transmission—but I still hadn’t submitted a formal application.

We took him up to our residence. Shirley gave him a tasty morning tea and had a very casual informal chat about a range of issues. 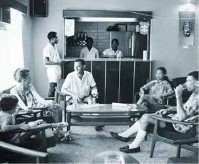 The Patair plane landed on its way back from Popondetta and our guest flew back to Port Moresby. I had no idea whether I would ever hear from him, or the ABC, again. Weeks passed; then I received a letter from the ABC in Sydney that I had been selected for interview and was to fly to Sydney for an interview with senior ABC officers.

I made an overnight flight to Sydney, was interviewed by an alarmingly large body of senior program executives in the sacred precincts of the ABC, and flew back to Kokoda not knowing how well I had fared or whether I was really wasting the ABC’s time and mine as well.

More weeks passed when I received the electrifying news that I had been appointed to the position.  I made the choice to abandon my promising career as a kiap and seek refuge in the ABC; undoubtedly the wisest decision I ever made in my life, because it led to a second career— one which lasted for thirty years; in the course of which I traveled the world and enjoyed a rewarding and eminently satisfying career in broadcasting and in senior corporate management.

Is it any wonder that these days I glance at a humble frozen pork chop with an overwhelming sense of gratitude!

It has been an absolute pleasure working with Vicki Long to produce the journal during the last year. I’m so sorry she’s unable to continue as editor, and I’ll miss the early morning emails!

However, I’m sure she’ll be keeping an eye on things—but not breathing down my neck, as before (with the metaphorical ‘big stick’)—and, hopefully, she’ll still be contributing items of interest for members to the journal.

All the best for the future!  JG