Featuring commentaries about previously published articles and news items, along with opinions of interest to PNGAA members. Also included are enquiries from those who require assistance with their research or finding someone from the past.
Please send your contributions to editor@pngaa.net

We thought we’d share some of the kind comments we’ve received about PNG Kundu. We work hard to ensure the journal is special, and the comments are appreciated, thank you.

In sharing these comments, we hope that it might inspire more people to join this wonderful association!

Peter Meissner: Just to say that I read the June Kundu from cover to cover in two sittings and was awestruck by the balance the editing team achieved between, e.g. the Australian WWII soldiers, PNG soldiers, general post ‘colonial’ nostalgia, mining, medical, teaching, defence, fauna, tales of recent visits, etc. The sheer energy, intellect and compassion of so many people who have visited PNG is so inspiring.

Jason & Nasain Gwilt: Just a note of thanks for the June issue of the Kundu magazine. Another excellent edition full of interesting stories and some outstanding articles from your readership. Please keep up the great work.

Kay Tisdall: Thanks to everyone for the new look magazine. I think it is fantastic. The articles and the Robinson Sakiki, MM pictures are great to see. The name PNG Kundu was a great choice. Thank you.

Harry Janssen: I have received the copy of PNG Kundu and have read it from cover to cover. What a beautiful magazine, and wonderful articles. The one from Murrough Benson brought back so many memories as our nearly twelve years from 1970 to 1982 was all in the Highlands and his story made us re-live our life in the Chimbu, Western Highlands and Eastern Highlands. I was so emotionally surprised that I gave him a call immediately and we talked for over thirty-five minutes about all the people he knew and we knew as well. Wonderful.

Anniversary of the PIB

In the June 2020 edition of PNG Kundu, I enjoyed reading the recognition given to the Papuan Infantry Battalion in the timely article by Max Uechtritz and Jeff Keough. Timely because this year marks the eightieth anniversary of the official formation of the PIB at Port Moresby in June 1940. As well as PNGAA, I belong to another association which honours the role carried out by the PIB and NGIB in our newsletters and website (www. soldierspng.com). 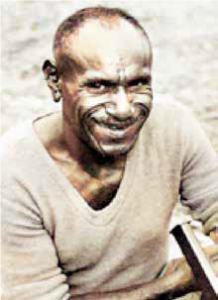 Our younger members were not aware of the wartime action of Robinson Sakiki so the photos of him are very welcome. That PNG Kundu article has prompted us to research Private Sakiki and his war record—our reference books simply note Private Sagigi (PN 97) being among the first one hundred recruits in June 1940 and there is no reference to a Military Medal award. Readers of PNG Kundu will be aware of the historical difficulty in recording PNG names accurately in English so the Sakiki/ Sagigi difference is completely understandable.

After reading the query under Letters & Enquiries on page 7 of the June 2020 PNG Kundu, I contacted Graham Hardy and established that the pilot of the crashed Cessna 190, VH-BVD at Kompiam Patrol Post in June 1958 was my late husband, Frank Smith (full name Leonard Frank Smith). Frank was a pilot in PNG for many years.

Three photos were found of the damaged aircraft with the following notes: Cessna 190 VH-BVD at Kompiam, Western Highlands, TPNG, April 1958.

The Cessna still exists in private ownership in Queensland.

Correction to the caption of the photo of David Eyre on page 57 of PNG Kundu, June 2020. David was a Chief Flying Instructor at the aero club after he left the Health Department. He was a medical assistant, not a medical student as captioned. The correct information, however, is included in the accompanying article.

The PNGVR Museum at Wacol, Brisbane, grows by receiving donations of new memorabilia. Items which have a story add so much more to the display. For example, we have had, for some time, a couple of 0.5-inch calibre machine guns on display. These items were donated by member Ken McGowan (deceased) but their history could not be told until their provenance was confirmed.

They are the rear turret guns from a Flying Fortress B17E, Number 41 2446 from Unit 14 RS USAAG known as the Swamp Ghost (featured in PNG Kundu, June 2020, page 19), which most were aware was situated in a swamp near Popondetta.

Ken recovered these guns in the 1970s when he was a camp manager for a mining prospecting group located nearby—he used spare helicopter hours to be lifted in and taken out with the guns one weekend. There is a video of this recovery in the museum.

Sorry to bring up this never-ending saga yet again, but I must put in my disagreement on Robyn Kienzle’s interpretation of her father-in-law’s various versions of Track and Trail, none of which I dispute— PNG Kundu, June 2020, page 15.

I also met her father-in-law on several occasions, particularly when he was in town for meetings of the Patair Board. However, I do not ever remember having a discussion with him on the correct name, or otherwise of the Kokoda Track. When I arrived in Port Moresby in mid-1954 there were plenty of ‘befores’ (those who lived in the country before the war and had returned to live and work) living in Port Moresby. I did get to know quite a few of them and actually lived next door to Les Clark, the Collector of Customs.

I cannot recollect any of them referring to the track as other than the track. In fact, there was quite incense at attempts to change it to ‘trail’. 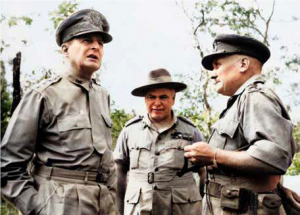 To a man they were all clear on how this change came about and they all blamed the one man – General Douglas MacArthur. Being an American and also Supreme Commander of the fighting in the Southern Pacific, he dictated that, in all correspondence and publicity, the Track was to be known and called the Trail.

They had no choice. Their Supreme Commander had instructed them, as the Americans only knew of the word ‘Trail’ whereas the Australians had always known it as ‘Track’, as in ‘There’s a track winding back,’ etc. How do I know all this? Well at one stage I researched the facts having spent time finding photographs of the police bois who carried the mail over the track before the war.  One boi left Port Moresby and the other left Popondetta with their mailbags over their shoulders, meeting at Efogi, and changing over bags before returning to their point of departure.

I was trying to put pressure on the Department of Posts to upgrade the park over the road from the then GPO in Port Moresby as a memorial to the bois who walked the track to deliver the mail. As an aside, no doubt you have heard the story of the time they mixed up the bags and returned with their same bag?

At present this park is known as the Customs Park, as the Customs used to be in the basement of the old Works building on the other side of the road. I had handed those photos to the General Manager of Posts so that he could get a statue made for inclusion in the refurbishment and, I hoped, re-naming. Unfortunately, the General Manager was replaced before the upgrade could take place —and with him went my photos. I believe that Daryl Binning, who put in the Vale notice on David Eyre, in the June 2020 issue of PNG Kundu, has also researched this matter and, independently, came up with the same result that I have found.

A reader’s letter trying to justify the use of the word Trail and two feature articles in PNG Kundu, June 2020, ‘Bert Kienzle: The Architect of Kokoda’ (page 15) and ‘One of these days we’ll get to Kokoda’ (pages 16– 17) sparked my special interest in PNG Kundu of June.

I note that the subheading to that article used the words Kokoda Trail rather than the description used by the author.

In the March edition you had printed my letter ‘Track’ or ‘Trail’, which covered the confusion in the minds of many, and particularly some authors which are perpetuating a myth. 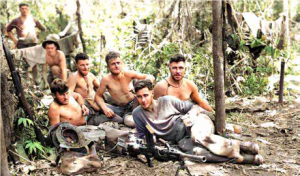 Men of the 2/31st Australian Infantry Battalion stop for a rest in the jungle between Nauro and Menari, during the Kokoda Campaign, 1942.

In describing the book, the text constantly refers to the word ‘Trail’, which is understandable, but incorrect when all the facts which led to the creation of this deception are objectively considered. Although I don’t have a book to promote, I am more than willing to email the letter contributor and the book’s author, or anyone else for that matter, a copy of my research while in PNG and later as I collected evidence of why the public and the Diggers on the track were brainwashed by General MacArthur’s edict that it must only be referred to by war correspondents as a ‘Trail’.

My email address for those wanting to obtain a balanced assessment of the matter is darylbinning@outlook.com. It is free.

Evidence supporting my findings is contained in the article on pages 16 &17 of the same edition, which recounts the writings of the experiences of an actual Digger on the track before MacArthur’s media manipulation filtered through to the front lines. He exclusively refers to the muddy pathway as a ‘Track’.

The Australian War Memorial has diaries and other material in its archives, which support this assertion.

Despite request, they identify any statements I made as incorrect, nothing has been received. My attempt to get the AWM to modify its display to acknowledge the original use of the word ‘Track’ have met a brick wall.

However, off-the-record remarks indicate they know a mistake had been made by various committees since the war, but nothing can be done about changing it now that subsequent awards and other official proclamations have been made.

It is a disgrace that our proud military history is being officially falsified to protect the reputations of those who originally got it wrong.

EDITOR’S NOTE: Daryl has sent in an extensive article on this which will be included in the December 2020 issue of PNG Kundu

Chris was in PNG with the Department of Forests prior to 1975 and, with Dick McCarthy, has been recording the history and efforts of Australian foresters in PNG before 1975 (details circulated in the September 2018 Issue of Una Voce). He is looking for images of the work boats operated by the Administration prior to 1975 such as workboat Motuana; MV Mangana and the MV Toa. There may be other wooden boats built in Australia which ventured into PNG waters. Any such information would assist.

The Department of Forests utilised many of these administration boats in their resource surveys throughout PNG.

It seems likely that many of the vessels used were ex-Army and built in Australia in WWII. 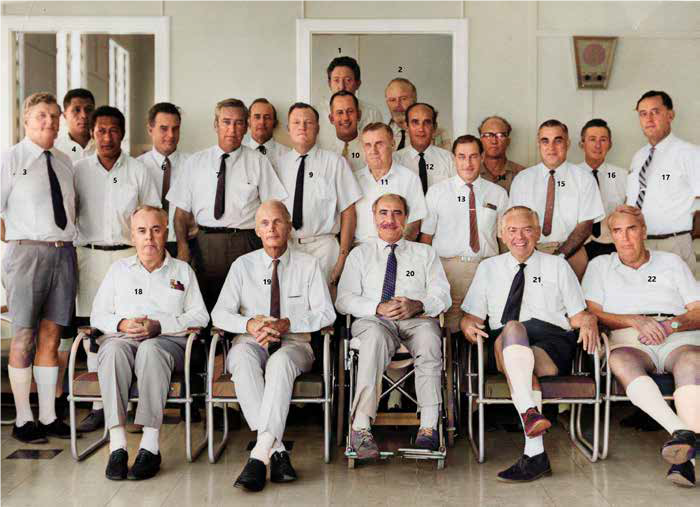 This photo was taken at a District Commissioner’s Conference in 1969. The conference included District Commissioners and special guests. Does anyone know or have further information about No. 3 – Mr Read please? If so, please contact Arthur Smedley by mobile 0420 411 944 or email at: agsmedley@gmail. com—or contact Andrea Williams by mobile 0409 031 889 or editor@ pngaa.net