The Lark Force Track is a little-known wartime walking trail with a big history. Located in East New Britain Province, it runs from the Warongoi River in the north to Tol, Wide Bay, along the south coast. The track is named after the 2/22nd Lark Force Battalion, an Australian force sent to guard Rabaul and its important harbour. 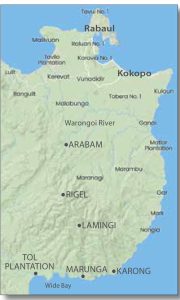 But when the Imperial Japanese Army descended in January 1942, the small garrison was outnumbered and quickly overwhelmed. The Australian soldiers were forced to escape across the Gazelle Peninsula in fragmented groups. One group of about 200 soldiers decided to retreat from the Warongoi River and through the northern Mali Baining villages of Arabam, Rigel, Vaingait and Lamingi. They crossed the rugged Baining Ranges, skirting Mt Bururimea, the highest peak in the province, and trekked to the Balus River, about four kilometres north of Tol Plantation.

On 4 February 1942, pursuing Japanese soldiers captured 158 Lark Force Battalion soldiers and some civilians between Tol and Masarau where they were massacred. The route taken by the Lark Force soldiers is a traditional bush track used by the Bainings moving between villages in the north and south. The German Catholic priest, Fr Alphonse Mayerhoffer, who was stationed at Lamingi pre-war, was providing support for Australian soldiers and it was he who pointed them to the track.

But the Lark Force Track hides yet another secret that local oral history only now has, only now, revealed. Sometime between 1942 and 1945, Japanese soldiers also massacred Baining villagers at Vaingait. The villagers were marched to the site and ordered to dig a tunnel into the side of a hill. They were then told to hide in the tunnel for their own safety from the Allied Forces bombing raids. A machine gun was placed at the mouth of the tunnel and used to slaughter the villagers. A conservative estimate of the number of the villagers killed is 200 but it is suggested that as many as 1,000 died.

Today, locals of Tol, Masarau, Marunga and the Mali Baining villages from Karong to Rigel have come together to acknowledge the history of the wartime track book-ended by two brutal massacres—one of Australian soldiers at Tol and one of Baining villagers.

Locals recognise the potential for this track to generate something of economic value through the tourism and trekking industries.

With the support of the National Museum & Art Gallery and the leadership of the indigenous Baining authority, Qaqet Stewardship Council, chaired by Nicholas R Leo, locals have come together to begin revealing the secrets and stories of the events of World War II from a local perspective. They plan to make the Lark Force Track a viable tourist track, firstly by mapping the route taken by the Australian soldiers massacred in Tol.

A 34-person team from the Mengen, Sulka and Baining tribes recently completed a seven-day mapping expedition of the Track which runs a total of 61.4 kilometres from Arabam in the north to Tol in the south. Baining landowners have also established an entity called RAIMA, which is envisaged to be the managing authority over the Lark Force Track. The major sponsor for the important $15,000 project mapping exercise was Angela Pennefather of Melanesian Luxury Yachts and financial assistance was also received from other private sponsors including the Qaqet Stewardship Council.