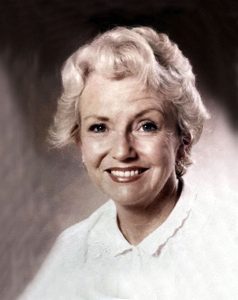 June Whittaker, who died on 8 February 2022, was a long-standing staff member of the Australian School of Pacific Administration/International Training Institute (ASOPA/ITI), a frequent visitor to Papua New Guinea and a long-time member of PNGAA, making a significant donation to the PNGAA document collection in 2016.

My father, Fred, was also a lecturer at ASOPA/ITA during the same period, and they developed a great professional relationship. To cite an example, June and Dad had adjacent offices and, for one of his recent birthdays, June sent him a selection of things to do with coffee—small plunger, cup and saucer, ground beans from PNG and dark chocolate from Bougainville—so he might recall their days as colleagues at Middle Head when, at around 11 am, he would call out loudly, ‘June, where’s my coffee?’!!

After the Whittakers retired to their property, Fairview, near Tumbarumba in the western foothills of the Snowy Mountains, Dad, my sister Amanda and I became frequent visitors and a very warm and strong friendship developed between we girls and June, cementing the bonds that had already developed between the former ASOPA/ITI colleagues.

Each year when we were planning our holiday to Victoria, Dad would phone June and ask ‘How are bookings at The Southern Cross in the Snowy?’ (The Southern Cross Hotel was a hotel in Melbourne, which opened in 1962 as Australia’s first modern ‘International’ hotel; Dad and other staff stayed there when interviewing prospective patrol officers for training at ASOPA.)

Such was the hospitality and generosity of our hosts that we always book-ended our holiday with a week at Fairview on our way south and a week on our way back. For two weeks each year from 1996 to 2013, June and Merv saw their guest wing turned into a mini-hospital after all the special gear required by Dad was unpacked, beds and mattresses were rearranged, furniture was moved. 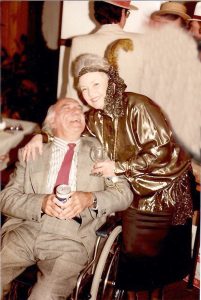 Mealtimes were somewhat delayed with a sumptuous brunch around 11.30 am, then a mid-afternoon feast of fresh figs and peaches plucked warm from their trees, followed by coffee on the terrace, drinks by the fire at 6.30 pm interrupted by the ABC TV 7 o’clock News and dinner served anytime from 8 to 10! Each year they introduced us to another fishing spot, where we would picnic while Dad cast in a line or two, and led us to picturesque places where we might sight a porcupine, or where there were wonderful things to explore like fungi forests, waterfalls, corroboree frogs, old pubs, vineyards.

My birthday sometimes fell during our stay and, although Dad and Amanda lost all track of time, June remembered and organised a celebratory lunch or dinner complete with fresh, sweet-smelling roses from the garden, candles, balloons, champagne and interesting friends to add to the merriment and make it a real party!

In the mornings, we would often awaken to the sound of June playing a gentle melody on the piano. In the afternoon, there was always something interesting to read—the latest Booker Prize winner, or the London Review of Books, or any one of recently published Australian novels, or history magazines from Scotland—these are just some that I recall.

Our evenings were fuelled by wonderful discussions where you could really get down to the nitty-gritty of a topic, have your opinion changed, or change another’s. Sometimes there was poetry, arising quite naturally from the conversation. June loved poetry, one of her favourite poets being W B Yeats. On a wall in the bedroom where Amanda and I stayed on our visits to Fairview, hung a small painting illustrating a few lines from a verse of one of his poems, and I will forever think of June when I recall these lines:

And walk among long dappled grass,
And pluck till time and times are done,
The silver apples of the moon,
The golden apples of the sun.

After she died, her daughter Ingrid and son Kristian organised a gathering of friends and family at Fairview on 12 March, about 80 in all, to celebrate June’s life and bury her ashes with those of Merv on the property. Much of what follows is based on their reminiscences and a short biography lovingly put together by June’s family.

June was born in Port Kembla, a beachside town near Wollongong, about 90 km by road from Sydney and well-known for its harbour and significant role in the industrial history of the region. She grew up amongst its steelworks, attending Port Kembla High School and enjoying a life near the beach with her family and many friends. In 1946 she was accepted by Sydney University to study for a Bachelor of Arts but, concerned that she was only 16 and might be exposed to unwanted attention from the opposite sex, her father decided Wagga Wagga Teachers’ College was a more suitable place for his impressionable young daughter to further her education.

Little did he realise that, with the end of World War II, the college had instituted a policy of granting scholarships to newly-returned servicemen, resulting in an influx of young men enrolling with June!

And so, she met Mervyn, a country boy from Tumbarumba, who had served in the Royal Australian Air Force and had just returned from overseas duty in Japan. One of the ‘notorious’ servicemen her father was so keen to protect her from soon became the love of her life and, after completing their study at Wagga, June and Merv were married in Port Kembla on 3 May 1952.

They began their teaching careers in Sydney, then returned to Wagga where they taught locally and built their first home. This was a hands-on build and Merv’s practical skills came to the fore, even to casting concrete blocks in homemade moulds, the cement having been acquired on the black market due to its scarcity.

In 1953 June gave birth to Ingrid and, undaunted by the demands of motherhood, completed a Master of Arts Degree majoring in English and History through New England University a year later. With her new qualification June became a lecturer at her old alma mater. In 1959, Kristian was born.

June always had a strong desire to travel but the opportunity had never presented itself until Merv facilitated this yearning. In 1962 the family, accompanied by June’s recently widowed mother, Della, set off on an adventure, spending two wonderful years travelling through Europe and teaching in England and Canada. June was in heaven, feeding her love of history, expanding her children’s education and fostering their love for travel while revelling in it herself. Friendships which developed then were kept alive until her death by June’s formidable letter-writing skills. 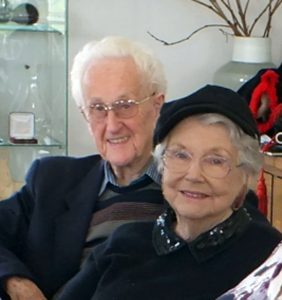 Returning to Wagga, the couple took up their respective teaching positions, but not for long as June was soon targeted to lecture in History at ASOPA at Middle Head in Sydney. Although that meant another move so soon, and a new teaching position for Merv, he supported June’s career enthusiastically.

From 1965 she was a lecturer in History and Government, preparing patrol officers and teachers to work with indigenous communities in the Northern Territory and Papua New Guinea, from 1974 Senior Lecturer and Head of Development Studies at ASOPA’s reincarnation, the International Training Institute, and from 1981 to 1993 Director of Regional Training and Aid Programs for AIDAB and AusAid (during this period ITI became the AIDAB Centre for Pacific Development and Training).

Her last position required extensive travel to many developing countries including PNG, the Philippines, Thailand, Fiji, Samoa, Tonga, and some African countries, to implement training programs for their respective governments.

After June’s death, among the many emails Kristian received was one from Tony and Helen Foster who wrote: 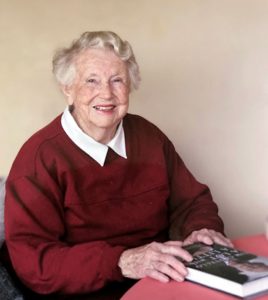 One of the major programs that June developed was the Education Program for Southern Africa (EPSA), which brought together many subject specialities and involved visits to the seven English-speaking African countries, Zimbabwe, Zambia, Swaziland, Lesotho, Tanzania, Malawi and Botswana. The program continued for five years, after which June designed a second phase, EPSA 2, which continued for a further five years.

I was always greatly impressed with her ability to design programs to fulfil the needs of the developing education systems, negotiate with AIDAB in Canberra and the education specialists in the seven countries and plan and manage the budgets.

June also designed and managed the Climate Impact Assessment Program for Commonwealth Countries promoted and funded by Bob Hawke. She had great talent for negotiating with and entertaining government officials from the participating countries, as well as an ability to manage climate specialists from Australian universities. It was a privilege to be included in the team that June led.

Editor’s Note: Part II of the story of June Whittaker’s life will be in the next edition of PNG Kundu.