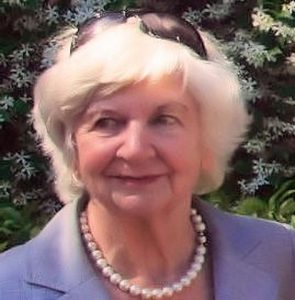 I met Judy in PNG in March, 1956. Shortly before, I had been brought in to Port Moresby from Lake Kutubu in the Southern Highlands where I had been a patrol officer for four years.
I TOOK UP A POSITION in the headquarters of the then Department of District Services and Native Affairs, of which all kiaps were a part. Staffed mostly by men who had been in the field for some time, the news that Alan Roberts, the head of the Department, was shortly to take on a new female secretary generated eager anticipation. When the new secretary arrived and was found to be an unmarried, beautiful, twenty-two-year-old lady, enthusiastic competition for her favour began. Thus, in the throng, I met the bewitching Judy.
Perhaps because I was the only one of my competitors with a car, I managed to get ahead of the pack and got to see a lot of Judy. That she seemed to find something in me that kept me there was, for me, unbelievable but, nevertheless, we were married just before Christmas that year at St John’s Church in Port Moresby. Her boss gave her away, and my best man was a somewhat corpulent colleague who earlier, with the temerity of an over-sexed kiap, had challenged Judy to a race to the top of a nearby hill, the stakes being a bottle of overproof rum. Judy won convincingly, but graciously allowed the vanquished and the onlookers to share her winnings. Judy and I then went on our honeymoon at the Rouna Falls Hotel up the road towards Sogeri and the Kokoda Track. 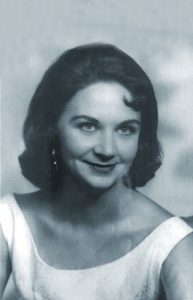 A year later, I was posted to a station on the other side of PNG. This was Lumi in the Sepik District, in the Torricelli Mountains between the sea and the mighty Sepik river to the south. There Judy lived a life that few Australian women have. She was the first kiap’s wife to live there and became much admired and loved. When she married me, Judy had had to give up the position she had held as a secretary, but her skills were far too valuable to go unused, so ways were found to bring her into our office. At Lumi, she became an excellent office manager and was the ‘girl with the golden voice’ on the district radio network. She became a marvellous hostess for our many visitors, despite being startled on one occasion when she opened the fridge door and a de-feathered but very alive chicken that she had earlier asked the faithful manki-masta to pluck for dinner, flopped noisily out.
In 1959, Judy was the first patient admitted to the then newly-built Boram hospital near Wewak. There Holly was born. That should have happened on Judy’s own birthday, but the birth was difficult and went on for an extra day. That nearly cost Judy her life. She has always valued highly the prayers and support she received from the nuns who tended her through the prolonged birth. Thank God Judy and Holly survived and Holly grew up to become a nurse and midwife before earning a doctorate in critical care nursing and now heads the University of Canberra’s school of nursing.
Another year or so later, I was asked to move to Finschhafen to start the first training program and live-in centre for local patrol officers. While there were more local services there than there had been at Lumi, outstation life continued to present Judy and Holly with many challenges. These were exacerbated after Judy had our second child, Kim, who was born in Lae in 1962. Again, thank God, Kim, like Holly, and with Judy’s dedicated nursing, survived early environment-related health problems. Kim went on to become an Olympic swimmer, competing in the Los Angeles Olympics in 1984 before becoming a senior executive. He now heads the recently renamed Commonwealth entity, Hearing Australia. We spent 1963 in Brisbane while I completed a degree and Judy took advantage of a return to metropolitan life. 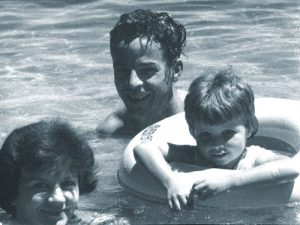 I was then posted to Rabaul. While living in the shadow of a volcano in Rabaul had had its moments, it offered a much more sophisticated lifestyle than we had been used to on small outstations, which we all enjoyed. A highlight of Judy’s stay there was a visit to the district by the then Governor-General, Viscount de L’isle. He was accompanied by his daughter, who was to receive a floral bouquet at their public assembly. To Judy’s surprise and delight, Holly, then aged five, was invited to make the presentation. This she did beautifully.
In 1966 I was appointed to a position in the headquarters of the department, so we returned to Port Moresby to live in Boroko. Judy took up a position in the office of the PNG Public Service Association (PSA). Rodney Madgwick (later Judge) was then General Secretary of the Association and Paul Munro (also, later Judge) was its Industrial Advocate. It was a busy time for the PSA, which had launched an action against the Administration seeking pay and conditions for local staff equal to those of expatriate staff. The PSA had sought assistance for the conduct of this case from the ACTU, which made available its own industrial advocate, one Bob Hawke (later to become Australia’s PM). Judy got to see a lot of the PSA legal team at that time, including at our home at a barbeque where, on one occasion, Bob got bailed up by our bull terriers when he took a short cut from his car over the fence near where her children were playing. He was rescued by seven-year-old Holly.
During our time in Port Moresby, we got heavily involved in swimming. Both Holly and Kim showed promise as swimmers and trained hard with the Boroko Amateur Swimming Club. Soon both were winning age group events and Kim went on to become an Australian backstroke champion and to play representative water polo. Judy valued highly the life membership we were awarded by the club.
After nine years in Port Moresby, with independence for PNG nearing, we moved to Darwin in 1974, where I joined the Commonwealth public service. We re-established there into what we had hoped would be a new and more settled life. Judy found new friends, including among the immigrant Filipinos who had become our neighbours. This ended abruptly on Christmas Eve, 1974, when Cyclone Tracy demolished our new home and the rest of Darwin. Judy’s courage and fortitude through this event was awesome. While we had not been injured physically, we lost nearly everything we had and the psychological impact was immeasurable. We were fortunate in having family support in Queensland for Judy, Holly and Kim, after they were evacuated. She managed the whole trauma without showing the deep impact it had had on her.
When our family reconnected after the cyclone in Canberra in February 1975, Judy led the process of finding a new home for us. I am forever grateful for her contribution then, and afterwards to rebuilding our lives. That included a new home round which she created a garden that was once described by a judge of a Canberra garden competition as ‘the best he had ever seen’. The children completed their education in Canberra and have both moved into successful careers. Both have subsequently raised families of their own, and being involved in their children’s growing up has been an ongoing joy for Judy, and has earned her their devoted and enduring love.
It remains only for me to say that Judy could not have been a better wife, supporter and loving partner over the sixty-two years we lived together, nor a better mother for Holly and Kim. For their many achievements Judy felt much respect, admiration and pleasure. She also loved deeply Holly’s husband, Geoff and Kim’s wife, Maree and her five grandchildren—Jaimie, Kiri, Christabelle, Elise and Rian. She adored her great-grandson, Henry. Sadly, she missed the birth of her second great-grandson, Mallee (Kiri’s first child), who was born less than a week after she died. She would have loved him just as much.
We all love you so much, Judy. We’ll never find another you, but I look forward to being with you again in God’s good time.
Goodbye for now and may God bless you.

This was the eulogy given at Judy’s funeral on 31 May 2019 by her husband, Tim Terrell