Readers of PNG Kundu are familiar with the sinking of the Japanese prison ship, Montevideo Maru, on 1 July 1942, and that 20 of the Japanese crew successfully abandoned the ship leaving the prisoners locked below to endure their ghastly fate as seawater flooded in. They might be unaware, however, of what conditions for the Australian prisoners would have been like on other prison ships and what was likely to be their fate if ships reached their destination.

Their movement from PNG was part of a systematic attempt by the Japanese to remove all European prisoners from areas they had conquered to places either near to or in Japan itself—from where it would be harder to escape and where their labour might be useful to the Japanese war effort, seeing that millions of Japanese males had been conscripted into their armies.

To give you an example, the Kukai Maru, a prison ship from Singapore, had its holds fitted with a double tier of bunks with each bunk covered with thin straw matting with each prisoner having a six-foot by two-foot space and those on the bottom barely able to sit up with those on the top bunk slightly better off. On this ship, the prisoners were allowed on deck for six hours a day before being locked down, suffering the fearful anxiety that they were doomed if any Allied plane or submarine chanced upon them as there was no indication that the ship carried prisoners.

Food, at best, was two cups of rice mixed with barley in the proportion of two to one, a cup of watery stew flavoured with either onion or a type of cabbage and maybe a few tins of meat and vegetables—from captured British supplies. As one could imagine, the stifling heat in these steel ships in tropic conditions (no air-conditioning) was almost unendurable. Latrines, built of flimsy timber and overhanging the side of the ship were never adequate and the scenes during the periodic outbreaks of diarrhoea and dysentery were revolting in the extreme. Another unnamed prison ship which also left Singapore with over 1,000 prisoners had 80 dying from dysentery and starvation on the voyage with another 200 dying after it reached its destination.

When they had landed, prisoners could expect arduous labour in coal mines, shipyards and steel mills, perhaps working 12- and 18-hour shifts with brutal beatings the norm and barrack buildings becoming infected with lice, flies and other bugs. As the war deteriorated for Japan in 1944 and 1945, rations were cut and cut again with Red Cross parcels being plundered and not handed out and there was also the ever-present danger of becoming casualties of the American B-29 air-raids, which covered the whole of Japan.

After the Japanese surrender, over 14,000 Australian prisoners of the nearly 21,000 captured were repatriated with the lost 7,000 including the 1,053 from the Montevideo Maru never to be forgotten.

Sunk by the American submarine USS Sturgeon (Lieutenant Commander Wright) about sixty-five miles west of Cape Bojidoru, Luzon, in the Philippines. She was heading for Japan from Rabaul, New Britain, carrying 1,035 Australian nationals including 845 army prisoners of war, the bulk of the 2/22 Battalion, Australian 8th Division (Lark Force). The 7,267 ton passenger ship had left Rabaul on the 22nd of June, unescorted and unmarked when at 0225 hrs on July 1st, was hit by two torpedoes from a four torpedo spread from the Sturgeon at a range of 4,000 yards. Developing a list to starboard, the ship sank stern first at 0240. Later reports indicated that 845 army personnel, 208 civilian P.O.W.s, including twenty missionaries, who had been living and working on New Britain when the Japanese came, 71 Japanese crew and 62 naval guards (a total of 1,186) made up the ships complement. Among the 208 civilian prisoners were the 36 crewmembers of the Swedish cargo ship Herstein which was bombed and set on fire while loading copra in Matupi Harbour. From the Allied contingent on board, there were no survivors. Lives lost amounted to 1,053.

A week later, on the 6th, the rest of Lark Force (168 men) and some civilian nurses, were herded on board the Naruto Maru and nine days later, dirty and half starved, arrived safely at Yokohama. All survived the war. After the war, Japanese sources state that seventeen Japanese crew and guards had survived the sinking of the Montevideo Maru and reached the shores of Luzon Island. Their fate is uncertain, they have not been heard of since and it is presumed that they were attacked and killed by Philippine guerrillas. 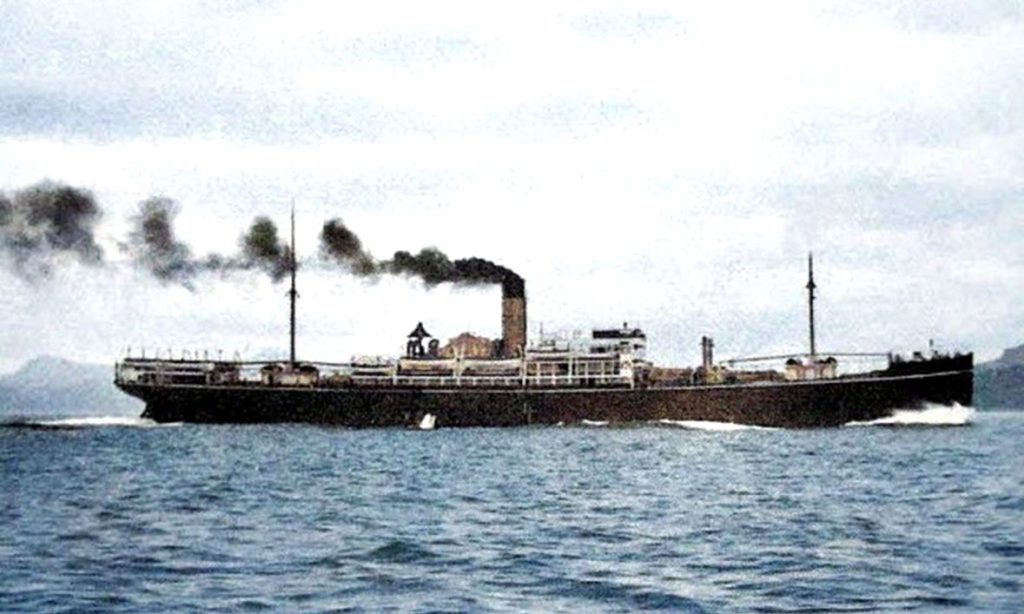 Rayuko Maru, one of the Japanese Hell Ships