We are staring at starvation. Yesterday the carriers finished their last bag of rice. One of them is now wearing the bag for warmth. At last we have crossed that murderous limestone country. The sharp outcrops have torn even the leather feet of the carriers and the police.

The big danger is infection from cuts. Even now I can hear the water coursing beneath us in underground limestone fissures and caves but the surface has softened to soil and low bush.

I estimate that we are at 7,000 ft and without rations our weakened party will start breaking down with bronchitis and infected skin unless our position improves. Hides’ 2 I.C., Jim O’Malley’s boots are wrapped up with his puttees and I have thrown my torn boots away. I have decided to go east down into the lower country in the hope of finding a tributary of the Kikori. We might be able to raft our way down into lower country.

I’m feeling guilty about the situation. Even now they trust me to get them out of this fix. The faith of the police in me is frightening but the carriers are not so sure I know what I’m doing. I was confident that we could buy kau kau from the locals but they want no contact with us. For two weeks we saw no one across the limestone

Yesterday we came across a new people. They yodeled to one another from hill to hill. A small party came down the track and told us quite clearly to go back. We tried to trade for food but they dismissed us. We even demonstrated the use of some axes but they were not impressed. They must regard us as white spirits because they are panic-stricken at the prospect of us camping in their area.

They try to hustle us along. They must see the abject state of our carriers but pity is not in their hearts. As the day wore on, their fear of us turned to contempt and ridicule. Some of them mimicked our poor carriers by limping and staggering beside them while others crowded around us laughing and pointing. To see the fear of death in the Orokolo’s eyes was pitiful but they kept shuffling along with the police escorting them. 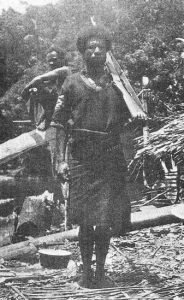 Sergeant Orai as usual had the men organised. Dekada the faithful Orakaiva brought up the rear while the ever watchful Simotoi from Rigo patrolled up and down the line. The other seven police sprinkled themselves among the carriers, quietly encouraging them.

Today they’re still following us but are becoming even bolder. A group of ‘characters’ would timidly approach our struggling column feigning hesitancy and fear. Suddenly one of them would shriek out in fright and the whole group would scatter in laughter. They would collapse in hilarious amusement then repeat the whole charade. The trouble with this sort of caper is that there is a fine line between play-acting and the real thing. I tried again this morning to trade for food but they refused all my efforts.

There were gardens along the track and we could have taken food by force but I decided against it. They were mischievous types who were looking for an excuse to attack us. They did not understand the power of twelve rifles so any explosion would mean slaughter on both sides. I would be confident of the outcome but in our desperate physical shape we can’t afford an attack. We’re not strong enough to carry casualties and some hard decisions would have to be made. Any wounded would have to be abandoned or shot, both choices unthinkable.

Jim suggested a demonstration of our firepower by shooting a piece of bark or even one of their dogs but I refused. Better they didn’t know our real strength; they may even interpret our firepower as inconsequential or of no account. Better not to show our full hand.

The next bridge was the key to ridding us of our dangerous escorts. We sat down on a grassy patch beside the gorge. Our opponents squatted down on the other side of the track. We cooked bunches of native spinach and the last of our tea and sugar. A young man, (perhaps aged 16), approached us with a skinny bunch of potatoes.

He laid them on the ground and indicated to me to match it with some trade. I put down a knife and cocked my eye at him for a response. All the while he smirked confidently at me and kept looking back at his elders as if to say, “Watch me do this mob.” He took away half the potatoes and looked at me quizzically.

I took back the knife and placed a necklace of trade beads on the ground. The young scoundrel picked up the beads and threw them into my face. He looked back again for approval and a front row of smiles and nods encouraged him even further. The boy put his hands on his hips and nodded to me as if to say, “That’s what I think of your deal!”

I held my temper and his stare and spoke in Motu to my orderly Emesi who was at my elbow. “Emesi, kick this dog back home. Show him who’s boss but don’t be too hard.”

Emesi realised the theatrical situation and was up to it. He marched around in front of me and snapped a smart salute. He then swung around and flattened the boy with an open hand. As the shocked youth stumbled to his feet I could hear the rifle bolts clicking behind me. Emesi let him have it in raw police Motu which went completely over his head but the meaning was quite clear. “What bitch dog gave birth to you? Crawl back into your mother. Do you know who this Taubada is? One of Judge Murray’s men. You like to die slow or quick? When Guvman comes I will see you. I know you. Calaboose for you.”

He then descended into police invective and proceeded to kick the boy back across the path, not a bad effort in bare feet.

Amazingly the elders in the front row seemed to agree with our response. Maybe these strangers were not such soft touches after all. Some of the back-stall audience were now on their feet and strung their bows. “My eye is on them,” hissed Sergeant Orai behind me.

I insolently turned my back on them and walked slowly back to my party. Our opponents didn’t clap but they almost did.

Now for the bridge. One of the police demonstrated how the bridge could be navigated. We arranged a loop pulley to carry our few miserable possessions across. One by one the carriers made a supreme effort to balance their way across. They were coastal people with no experience in this mountain skill but fear overcame their clumsiness and it was a long drop to the creek bed.

I quietly instructed Sergeant Orai that he should shoot to kill if there were any moves to interfere with crossing. We were at our most vulnerable with a split party on each bank. As each constable reached the other side they propped themselves up to advantage and trained their rifles on the mob. One of their fight leaders kept haranguing them into action but they weren’t having any of it. They looked down at the ground and jabbed their bows into the dust. At last faithful Orai was the last to cross, edging his way across the vine with the others steadily levelling their rifles in support.

Safe at last. Dusk was fast approaching. Without looking back, we shook their dust from our feet and disappeared into the gloomy forest. (Jack Hides 1908–1937)

BACKGROUND TO IN EXTREMIS

Two families were most influential in the early development of Papua—the Champion and Hides families.

Herbert Champion was, for many years, Hubert Murray’s Government Secretary. His three sons Alan, Ivan and Claude were variously treasurer, explorer, magistrate and other roles great and small. For instance, Ivan Champion, on his own initiative, navigated the Laurabada from Moresby to Mal Mal Mission in 1942 and evacuated one hundred and twenty survivors from the Rabaul battalion (2/22ND) all under the noses of the Japanese occupation forces. Father and sons, the Champion family contributed one hundred and thirty years of valuable service to the Territory.

Jack Hides and his brother had similar backgrounds to the Champion boys. They were all born in Moresby, spoke Motu, could think and track like a native constable. Jack Hides was effective and confident in handling first-contact natives and looked after his carriers. He was supported and trusted implicitly by his hand-picked police. It was said that sergeant Orai and orderly constable Emesi could read Jack Hides’ mind and anticipated his orders, so attune were they to their officer’s intentions. Hides was a protégé of Sir Hubert Murray. By the age of twenty-five, Hides had achieved the reputation of a Canadian Mountie who always got his man. In 1935 he was given the task of following the Fly River to its source and then to strike eastward to explore the landscape and populations of Papuan uplands. In a six-month epic journey Hides did just that and opened up the potential of the southern highlands. IN EXTREMIS outlines one episode of this grueling expedition.

PRINCIPAL SOURCE FOR IN EXTREMIS

The author has drawn upon several sources to dramatise the story. Many years ago, he was inspired by Jack Hides’ book Papuan Wonderland, first published by Blackie and Sons Ltd. Glasgow in 1936. Parts of this book were based on Hides’ patrol journal which he daily recorded in spite of serious dysentery attacks and the ravages of water damage. Twenty-five years after the Patrol, the author lived at Ihu station on the Vailala river. This was two miles from Auma village whence twenty-seven Orokolo men were recruited by Hides. A few of these carriers were still alive in the 1960s. In 1935 Stanley Dewdney was the L.M.S. missioner at Orokolo and was still there in the early 1960s. In the 1980s, anthropologists retraced the patrol’s route and confirmed the opinion that the Injigale people were hostile to the patrol because they suspected that Hides and Jim O’Malley were pale ghosts of ancestors. They were to be rejected and eliminated if they insisted on penetrating their area or attempted to trade food with the inhabitants.

Soon after the expedition, Jack Hides resigned to work for Placer Development, a gold mining company. After another prospecting expedition, Hides went South in a much-debilitated condition. One night he missed the last tram from North Sydney to Naremburn and walked home in the rain. Two weeks later he died of pneumonia. He is buried in Northern Suburbs cemetery, not far from prime minister Billy Hughes who admired Jack Hides as ‘an ornament of the tradition of the patrol officers that inspired him’. Jim O’Malley, Hides’ 2 I.C. went on in the service to a distinguished career. He later became District Commissioner of the Delta Division which was in the area of the 1935 expedition.

Author’s note: IN EXTREMIS is the story of Jack Hides’ Purari Patrol in 1935