In previous issues, Ron Austin related the history of Bristol Freighters in TPNG, and now he tells some of the stories of his time in flying in the Highlands.

One afternoon our senior traffic officer advised me that there was a full load of building material for Tari, west of Mt Hagen and the furthest airstrip from Madang. They would load the Bristol aircraft overnight, and it would be my first flight in the morning.

The load sheet showed we would have spare weight availability on this trip, so I asked my wife, Audrey, if she would like to come for an unusual tour. A fellow Madang-based captain, Aart Hofman, elected to fly as second pilot to experience the strip at Tari. Most traffic in and out of there was light charter, so the strip surface was not designed for heavy aircraft. Because of its isolation and lack of heavy equipment the strip surface was maintained using only a tractor to pull a light steel roller along it. This soft surface was to prove my downfall.

The early morning visibility was excellent. Take off was at 0800 and I flew the first leg to show Aart the geography of the route. We departed, tracking for Wapenamunda, a slight dog-leg from the direct track, but a good track guide for Tari.

We were soon on descent through the Tari gap. The gap is just another entrance to the valley, slightly lower than the surrounding mountains. At the bottom of the descent we tracked to position for our downwind leg, turned for the final leg and landed.

I rolled the full length of the strip to avoid heavy braking on the dirt surface, then turned and backtracked to the unloading bay near the centre of the strip. This small gravel area was really too small for a Bristol and, attempting to turn the aircraft,

I put the left wheel into loose dirt.

The wheel sank into this softer surface and the aircraft bogged. I have been asked what a pilot thinks in this situation. Well, having come to an unexpected stop, my first reaction was to look down at the left wheel. You immediately accept the fact that the aircraft is not going anywhere. There was nothing to do but shut down the engines and give a normal arrival call to Madang air-radio. During these actions your mind is processing the procedures you could use to get the aircraft out of this situation. This consideration of alternatives is a familiar feeling: we do this constantly from the time the aircraft first moves on the tarmac until the engines are cut at the completion of any flight.

Back to our problem! Disembarking, we confirmed there was no damage to the wheel or aircraft. The tyre had just broken through the surface. Aart and I agreed 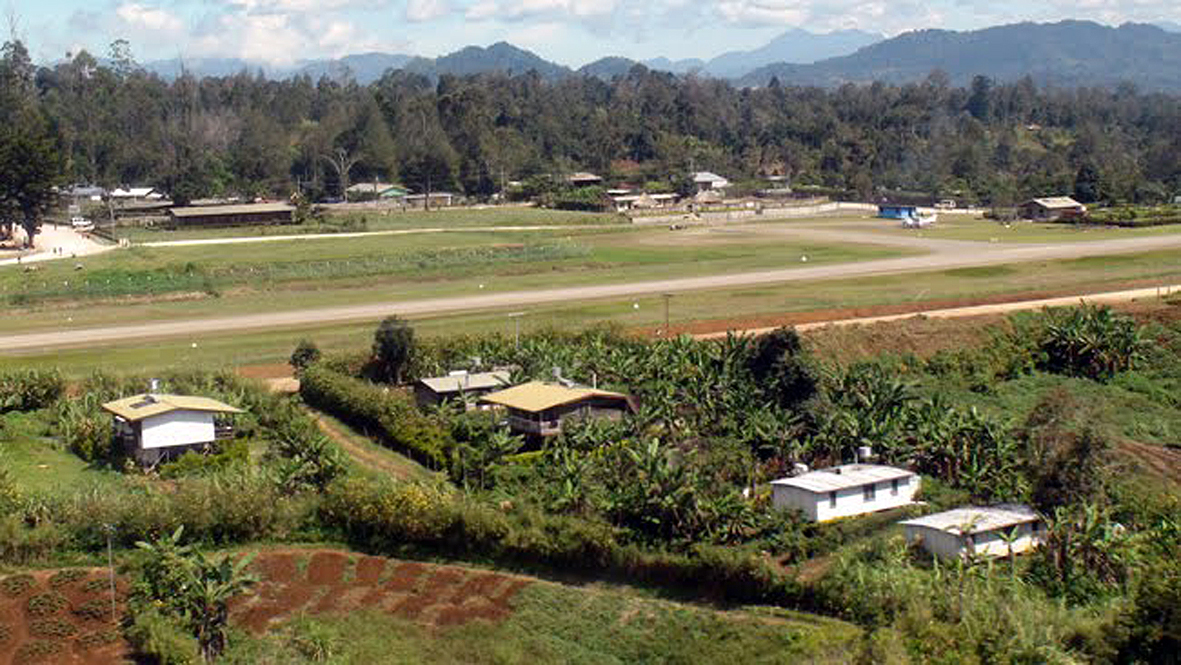 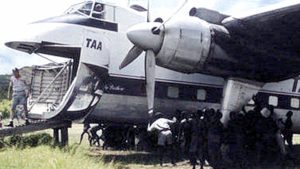 Moving B170 up to the ramp to unload a truck

that the first step was to have the heavy cargo unloaded to make the aircraft lighter. We discussed the situation with our local agent; I asked for a shovel to dig the wheel out and he said he would contact the local patrol officer—the kiap.

These young officers were always very enthusiastic. They helped with any problem in the district. Ours appeared, not alone, but with a large number of ‘calaboose bois’ in jail for various misdemeanours. As a work team they usually repaired roads and generally improved the district. As they were fed and housed while in jail they were happy to do the kiap’s bidding. The team had several shovels so it was a breeze to commence digging a ramp down to the level of the bogged tyre. Caution was needed to curb their enthusiasm or they would have buried the aircraft in dirt.

With the load removed and the ramp completed we shut the front clam-shell doors. Aart and Audrey stood forward of the aircraft where I could see them. On Aart’s clearance, I started the left engine and increased the power while holding the right brake in an attempt to lever the left wheel out of the hole. From my seat I could see that the wheel would not move. It seemed time to shut the engine down and have a ‘committee meeting’.

The kiap could see our problem and he suggested he organise the bois to push sideways on the rear fuselage and add more leverage and to to drive the wheel up the ramp. For this second attempt Aart also suggested we apply some flap to boost the down wash and improve the lift.

This attempt was successful. The wheel rolled up the ramp and forward on to firmer gravel.

I believe the native team pushing on the side won the day for us. Only then did I note that while the engine was running Audrey and Aart had their hands completely over their ears. At close range the noise of just one Bristol engine at high power is painful to the ears.

Our ‘emergency’ team expertly filled and repaired the parking bay. Their long practice building roads did make them experts. After thanks all-round, we climbed aboard with Aart at the helm as nominated captain. I offered to point out an alternative route to Madang, but he asked me which was the most direct route and I told him it was over Mt Hagen, so he made his command decision and this direct track was his choice. We had a clear run home over the Wahgi Valley and were soon on the ground at Madang. I don’t think Audrey has ever been so glad to climb out of an aircraft. Even now, fifty years later, she can still remember the noise and the headache. There were no repercussions following this adventure: ‘Just another day at the office’.

Bristol pilots gained a high sense of achievement by handling an extreme variety of cargo. Our overall responsibility was to see the cargo offloaded in the safest manner and within a practical time schedule. Some Bristol cargo loads were particularly difficult to handle. For example, we could carry a complete D4 Caterpillar tractor, weighing over five tonnes. The traffic officers would ask me, as captain, where I wanted the load to be tied down; in Melbourne a team of ‘engineering boffins’ would take ages to do the calculations for such a load, but in TPNG it was at the captain’s discretion. Judging the centre of balance of the tractor, you would instruct the loading crew to place this balance point below the centre of the wing structure which is visible at the top of the cargo bay. To secure the load properly was impossible; we chocked the tracks and then used light chain to attach it to the floor’s attach points—tie down rings set in the aircraft’s aluminium and plywood floor. This meant that we accelerated very carefully on take-off and braked very gently after landing.

We once flew a complete tea processing plant from Madang to Mount Hagen. It came in kit form from England, and the specification required that every tank and condenser would fit into a Bristol cargo bay. Loading this factory, we found the large round condensers fitted into the hull almost like a cork in a bottle.

When this ‘build yourself’ factory kit was unloaded on the Madang wharf, the native stevedores cut the steel wrapping holding each specific bundle of piping together. This greatly helped us load and carry it but was a nightmare for the engineer sent from England to assemble the plant. On one occasion I saw an engineer walking around holding a complex bendy pipe seeking its correct location.

Occasionally long H-section steel beams were carried. They were very heavy: four of them made up a maximum cargo load of 5,443 kg. In Madang they were loaded using forklifts but there was none of this kit available in the Highlands. I used the agent’s truck and a chain to unload them. Several half hitches of chain were wrapped around the beam and we pulled the beams out one at a time from the front of the aircraft with the truck. Because the beams fell onto soft dirt, I don’t think we bent them, but they were quite a sight as they crashed to the ground.

Another interesting load was the two steel underground petrol tanks loaded by forklift in Madang and flown to Minj. The strip at Minj was a stretch of grass adjacent to the village and we found there was no equipment for unloading. Our agent contacted the local kiap and, again, this one brought a team of prisoners from the local jail.

Being an old boy scout, I used rope to form a girth around the tank, extended two ropes outside the front doors and divided the labourers into two teams to pull on the ropes and drag the tanks out. When working as a team the natives often sang in a cadence similar to sailors, and applied effort in time with the song. The first tank was moving to the doorway when one of the ropes broke. There was much hilarity as the team climbed to their feet and we did a quick reef knot to join the rope. The tank emerged from the aircraft, fell to the ground and was rolled away. The second tank was at the back of the cargo bay; the extraction went smoothly using additional rope, but on exit the tank rolled sideways and hit the side of our nose door quite heavily.

Trying to close the door, we found that the clamping levers would not move into the locked position. The aircraft could not fly with doors unlocked, so I asked the kiap to again divide his team in two to push the doors together while I attempted to lock them on the inside. Success!

We flew back to Madang and told the engineers about the problem, suggesting they take care releasing the locks as they could be dangerous with all that strain on them. It all ended well—the door struts were adjustable and that night the door was restored to its original shape.

These stories illustrate the strength and adaptability of the Bristol Freighters and their pilots and engineers and yes, kiaps and the prisoners in a couple of different jails, too. u 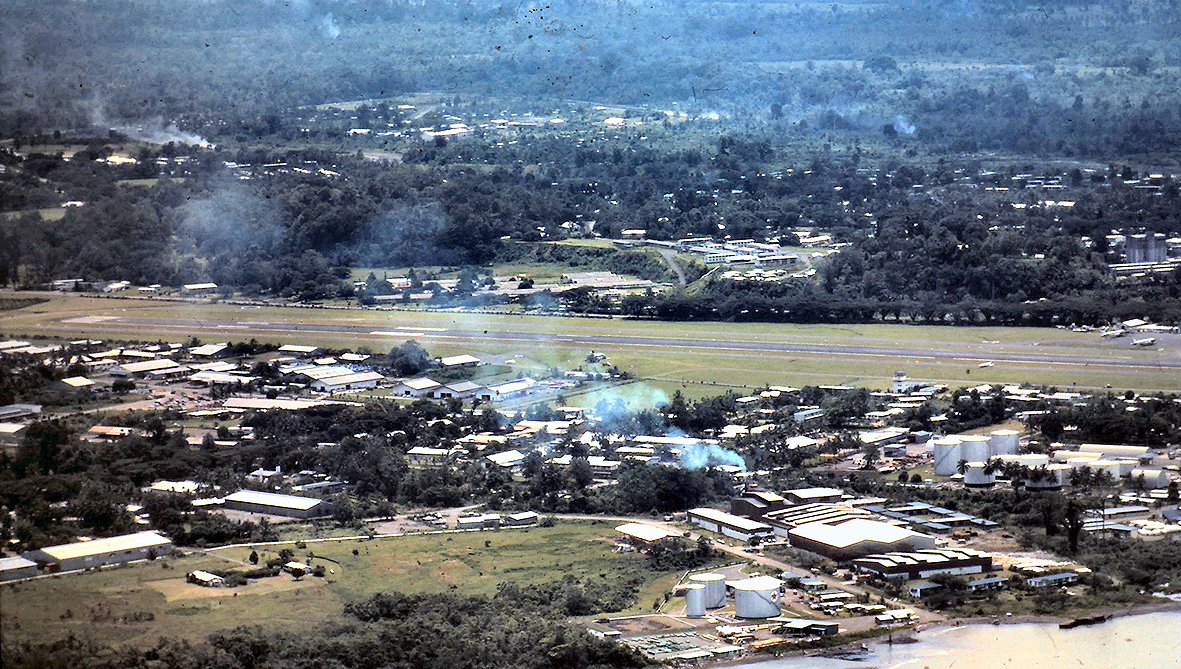